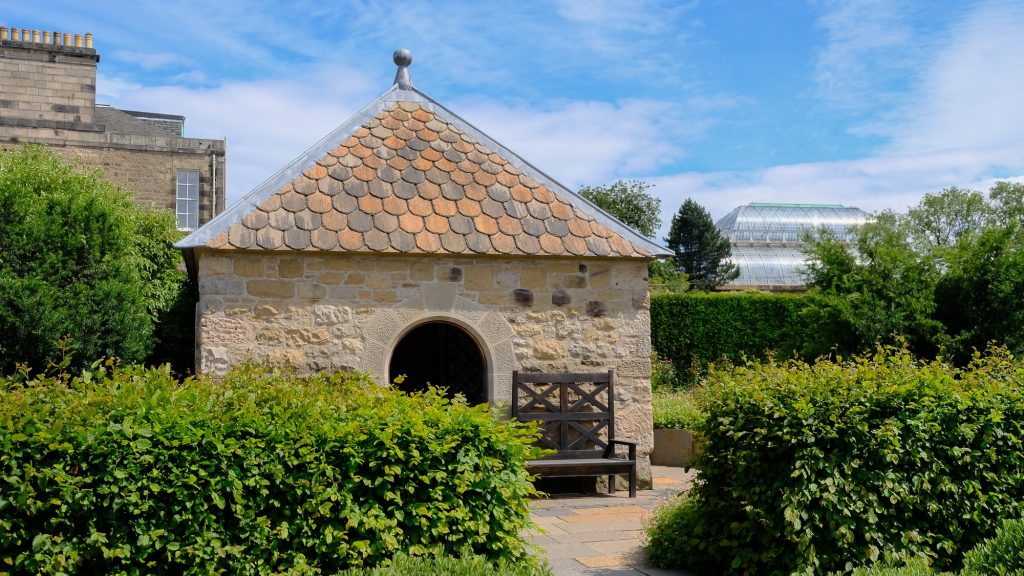 The Queen Mother’s Memorial Garden, designed by architect Lachlan Stewart, was opened in July 2006 by members of the Royal Family including Her Majesty The Queen, The Duke of Edinburgh and The Duke and Duchess of Rothesay.

The garden has been designed to reflect the life of the Queen Mother. Its design is based on the Eassie Cross, near Glamis Castle, her childhood home. At the centre of the garden is a labyrinth of Bog Myrtle (Myrica gale), in a pattern of interlocking ‘E’s. Bog Myrtle is a native of Scottish Highlands and is highly ornamental with its branches covered in golden catkins in spring, and golden leaves in autumn.

The planting surrounding the Labyrinth is formed into four geographical areas – Asia, Europe, North America and Southern Hemisphere, to represent the Queen Mother’s travels throughout her life. Unlike with the majority of the planting in the Botanic Garden plants included in this area are purely ornamental, rather than the phyto-geographical wild collected displays found elsewhere. A large number of the plants in this area are from commercial nurseries, many with royal connections or regal connotations in their names.

Each geographic region has a focal tree, with other shrubs and herbaceous plantings in the surrounding borders all representing the flora of that region:

• Asia – Cercidiphyllum magnificum is the focal point for this section of the garden, surrounded by plantings of Iris, Primula, Magnolia and Papaver

• Southern hemisphere – This section contains exotics like Phormium, Phygelius, Crocosmia and Agapanthus, making it one of the most distinct of the four regions. The focal tree is Nothofagus antartica from the mountains of South America. • Europe – Alongside Aster, Salvia and Genista from mainland Europe, the four constituents of the United Kingdom are represented in the areas plantings. Meconopsis cambrica, the Welsh Poppy represents Wales, Northen Ireland is represented by the Irish Yew Taxus baccata ‘Fastigiatum’ with traditional English roses and the labyrinth of Myrica gale completing the UK planting. The focal tree in this area is the common oak Quercus robur ‘Fastigiata’.

• North America – A columnar cultivar of the Tulip tree Liriodendron tulipifera ‘Fastigiatum’ is the focal tree this region. Other plantings include the Californian native Trillium chloropetalum which is one of the earliest plants to flower in the garden, with maroon flowers held just above the bright green leaves. Decoration inside the pavilion

The final focal point of the Queen Mother’s garden is the Pavilion. The structure is built from Caithness stone, which has also been used for the path and the slab wall which is engraved with the names of the organisations for which she was patron and the regiments for which she was Colonel in Chief. The detailing of this structure is a celebration of Scotland, with the seating and other details made from native oak. The shells and pebbles were collected by school children from across Scotland, whilst the pine cones, which again represent the four corners of the globe, were collected from RBGE and its three regional gardens.