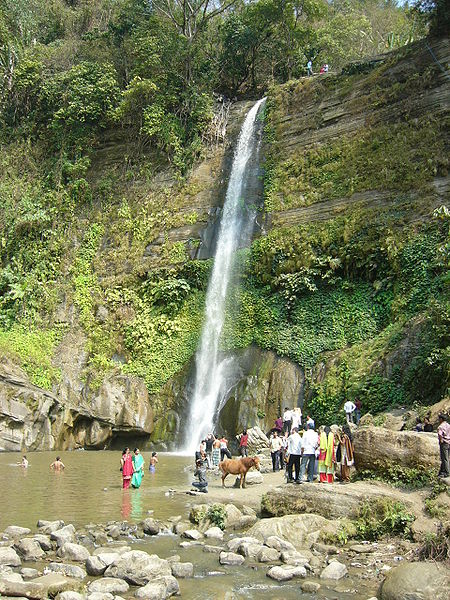 Sylhet is frequently given as a collection locality in the Wallich Catalogue, but although this is a major town of NE Bangladesh, there are dangers in mechanically ascribing all collections from Sylhet to Bangladesh as some will be from the bordering hill regions of Meghalaya, India. Kew botanist Charles Baron Clarke wrote on this subject, using first hand experience from exploring these regions. His manuscript is filed with the Wallich Catalogue in RBG Kew’s Archives, and although later postumously published it is not widely known. The following paragraphs are reproduced [with comments in brackets] from C.B. Clarke’s manuscript Notes on the “Khasia” localities of Wallich’s List, as appeared as the Anonymous article, The Wallichian Herbarium, in Bulletin of Miscellaneous Information, RBG Kew, 7: 255-262 (1913).

‘The frontier of Sylhet was, at the date of F. De Silva’s collections, just north of Pundua where it is now. Pundua was then as now the “Gate” of the Hills, the main-road ascending 4000 feet from Theria north of it. At this date there were English officers and troops at Nungklao [Nongkhlaw], who went up from the north valley (Goalpara): but none at Cherra Poonjee [Cherrapunji – allegedly the wettest place on earth].

‘Khasia’ was subsequently part of Zilla Sylhet, and (down to 1868) under the Judge of Sylhet, and was called North Sylhet. The locality ‘North Sylhet’ occurs frequently in the collections of Griffith, &c., but not (so far as I recollect) in Wallich’s; it was a name later than Wallich’s time.

At Sylhet Station, 16 miles S.E. of Pundua [with this measurement Pundua could be modern day Companiganj, or close to it, and not to be confused with Pandua in W Bengal], there are teelas, isolated hills 100 feet high, and considerable tracts of jungle between and round them. This is a very fine collecting ground; here grow many orchids and figs, and Asplenium longissimum, which Wallich marks “Sillet.” Under n. 2278 Wallich writes “Sillet De. S.,” “? B. Mont. Sillet, F. De Silva.” From this it is clear, as from many other entries, that Wallich distinguished between ‘Sillet,’ i.e. the old (and present) Zilla, and the ‘Mont. Sillet’ or ‘Mont. Sillet vicinae,’ by which he indicated Khasia.

There are, however, a large number of plants marked by Wallich ‘Sillet’ only which in all probability came from Khasia. This is especially the case in the first numbers (0-2160); afterwards Wallich was more careful. In the case of common, or widespread, plants Wallich seems (even later) not to have troubled to write more than ‘Sillet.’

Pundua is the farthest point north to which F. De Silva’s boat would go [this also fits with Pundua = Companiganj]. He collected, from his boat, along the rich Terai (0-2000 feet alt.) along the southern face of the hills; and he appears to have ticketed such collections as simply ‘Pundua.’ Many of the plants thus ticketed ‘Pundua’ were (from our present knowledge of their distribution) collected at 2-6000 alt. and some way into the hills. F De Silva may have made 2 or 3 days excursions from his boat, or may have employed Khasis to collect.

The only point to note here is that all the collections marked ‘Pundua’ came (certainly to me) from Khasia – no collector at Pundua would attempt collecting southward thence in the swamps – all the ‘Pundua’ plants come from the hills.

None of the plants marked ‘Sillet’ can be safely or profitably assigned to Khasia on Wallich’s authority. Many we may strongly suspect to be Khasi, on abundant other evidence; it is in all these cases useless to cite Wallich(i.e. for the locality Khasia) because his examples ticketed ‘Sillet’ adds nothing to our evidence, i.e., as to Khasi localities; it only proves that the plant was collected either in Sylhet or in Khasia.

Any ‘Khasi’ localities taken from Wallich’s list should include all the plants marked ‘Pundua’, ‘Montes Sillet’ and none of those marked ‘Sillet.’

On some of Wallich’s sheets, the name Sillet has by some hand been ruled out and Singapore foisted in; as in the case of Asplenium longissimum and some other species belonging to the teelas at Sylhet Station.