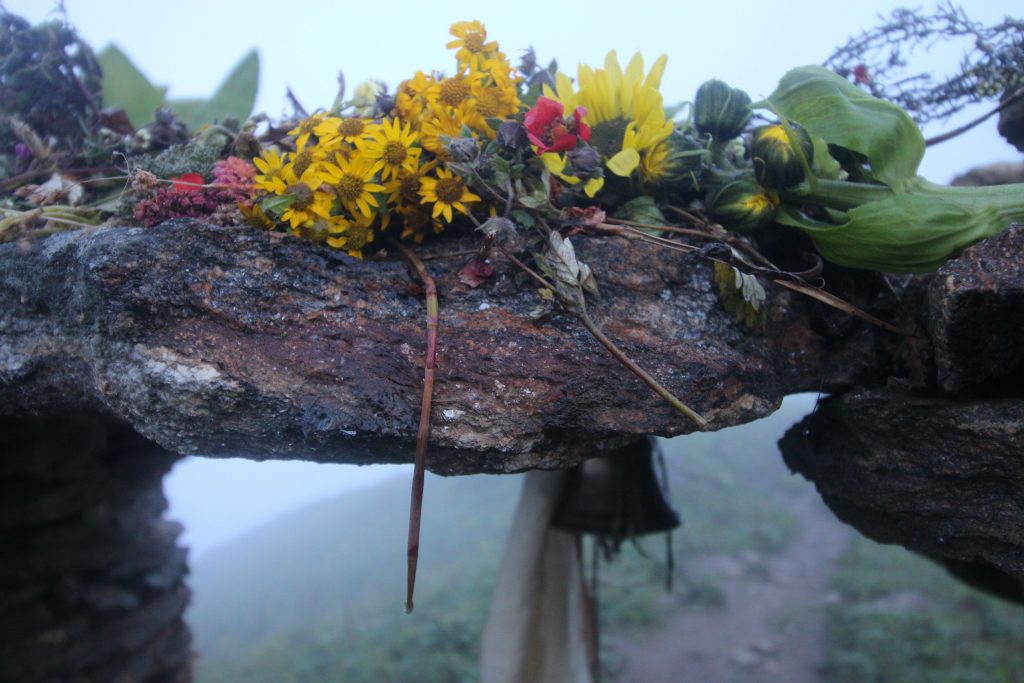 Mountain flowers are placed on the gate, Bistorta, Cremanthodium and, Potentila can be seen here.

On our 2017 expedition to far west Nepal we spent much of our time following a pilgrimage trail. This trail beginning in Martadi and ending at Budinanda Tal was way marked with stone gates (Tal is Nepalese for Lake). These gates are found on mountain tops and in the villages you pass through on the way. When passing through the gates it is custom to pick mountain flowers and place them on top and ring the bell 3 times. I loved these gates, they marked progress as we trekked and were all different from one another. They were often refuge to plants that grew on the mountain ridges and gave a sense that we were somewhere that was spiritually very important to many people.

Our Nepalese Garden in Edinburgh has been developing over the last 3 years, the prayer flags give it a great Nepalese feel but we wanted a structure that would improve the sense of place further. A gate seemed perfect. We were kindly given the funds by the Friends small project fund and the build was completed by three experts from the East of Scotland branch of the Dry Stone Wallers Association. We are extremly gratefull for the time Richard Love, Alan Fox and Dave Taylor gave to build the gate. The craftsmanship in the construction is exceptional and far exceeded our expectations. The build was technically chalenging due to the curves of the pillars and the 840Kg weight of the stone that bridges the gap. 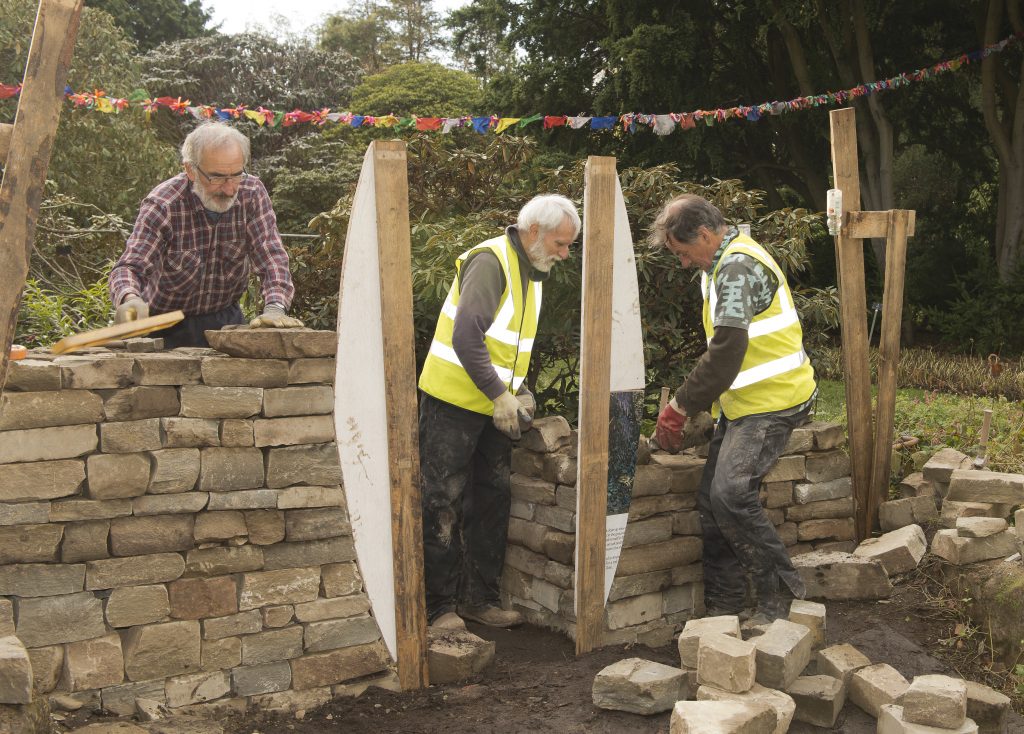 Richard, Alan and Dave of the East of Scotland Branch of the Dry Stone Wallers Association constucting the pillars. 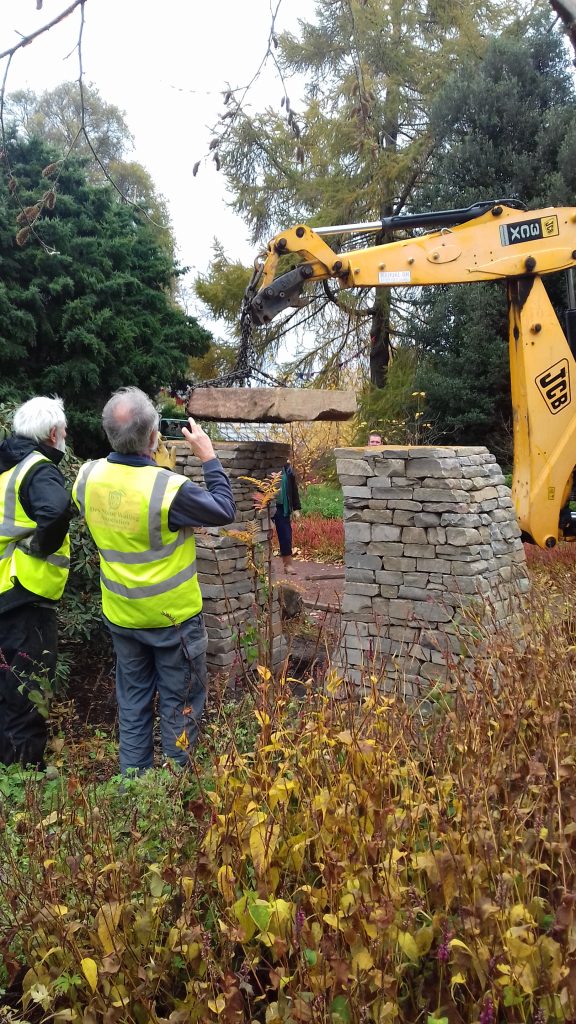 The 840kg Sandstone block is lifted into place with the JCB

The bell was brought back from Kathmandu by Dr. Bhasker Adhikari who had just returned to Edinburgh from field work looking at the impact and control of invasive species in Nepal. At the official opening of the Nepalese Gate, the bell was hung by Sanjeev Kumar Rai, Director General of the Department of Plant Resources (DPR), the national body responsible for plant biodiversity in Nepal, and RBGE’s main partner for the Flora of Nepal programme. 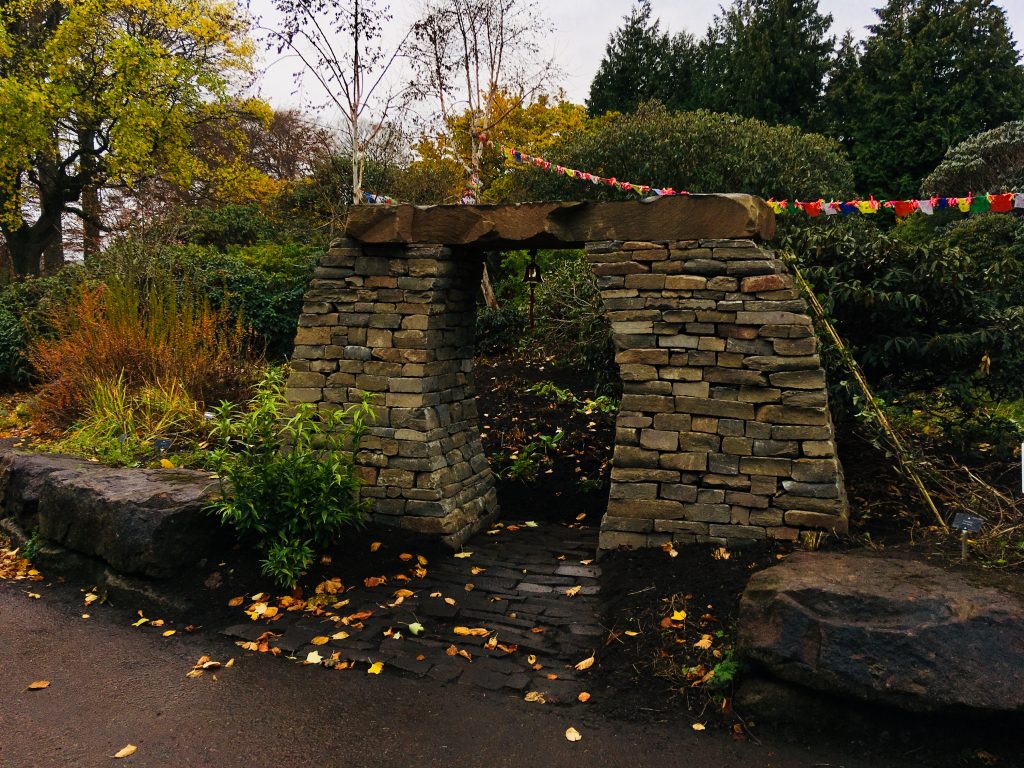 The completed gate with bell

The new gate provides a striking feature at the edge of the Nepalese Garden and symbolises the strong working relationship between RBGE and the South Asian country.

Bellow are Images of the gates that inspired the structure. 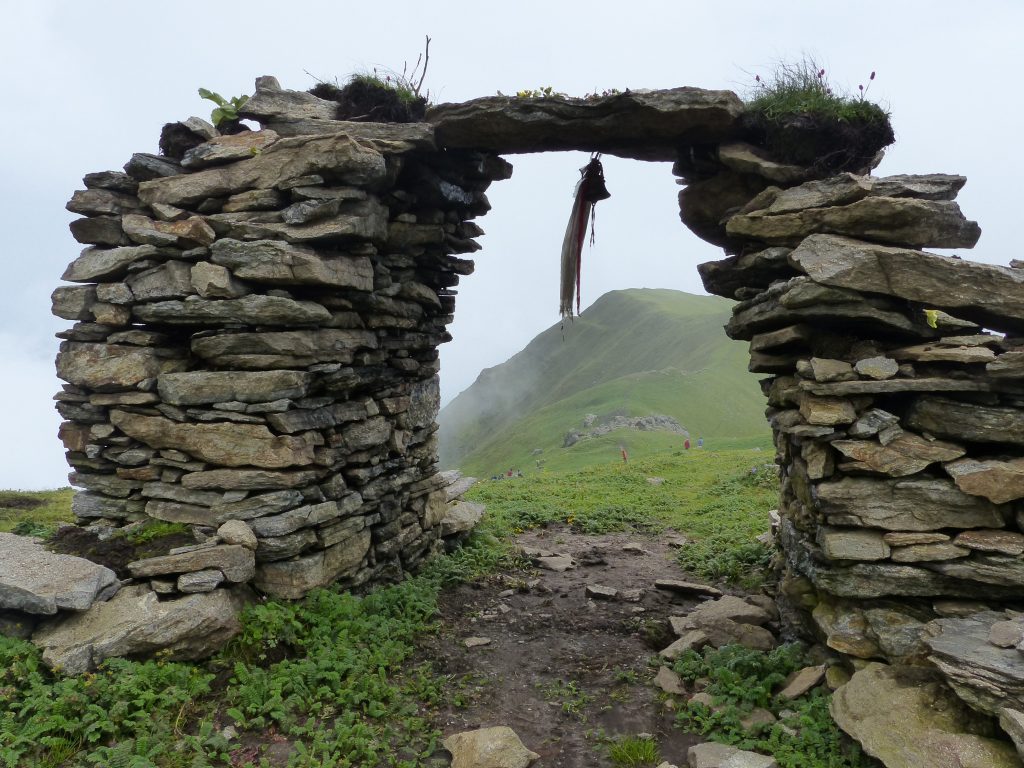 This gate marks the path along the Chaki Lekh, Bajura 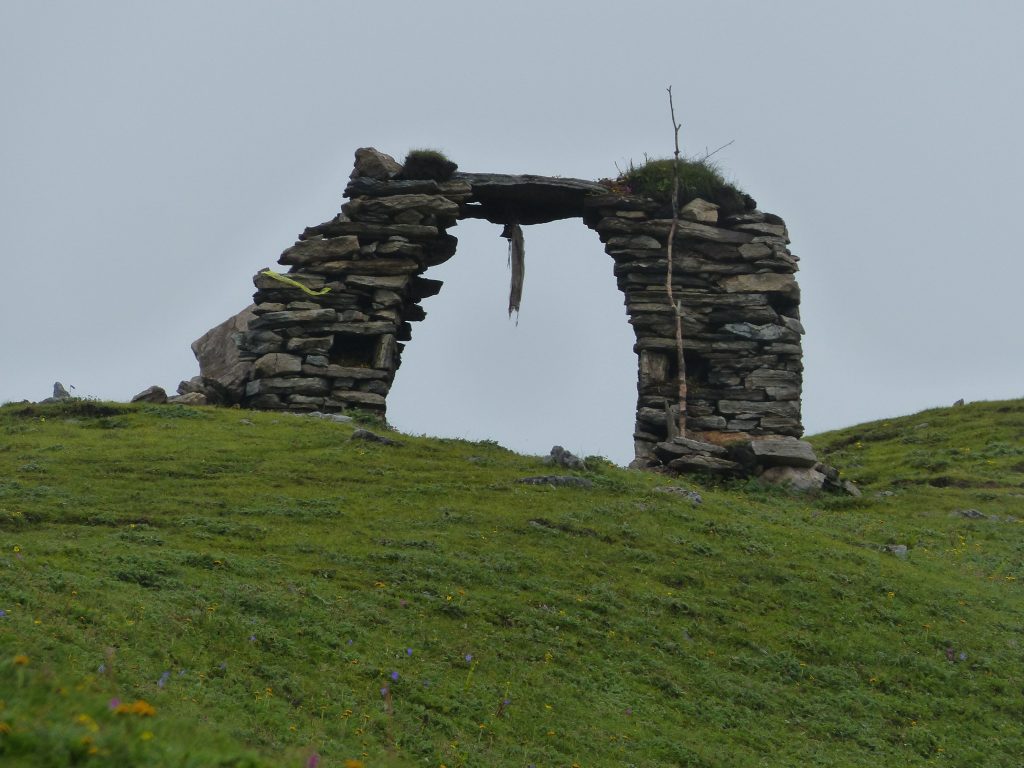 The ridge top here is grazed heavily by horses brought into the mountains for summer pasture but was suprisingly rich in Pedicularis species. A birch staff has been left against the pillar and cloth tied to the bell. 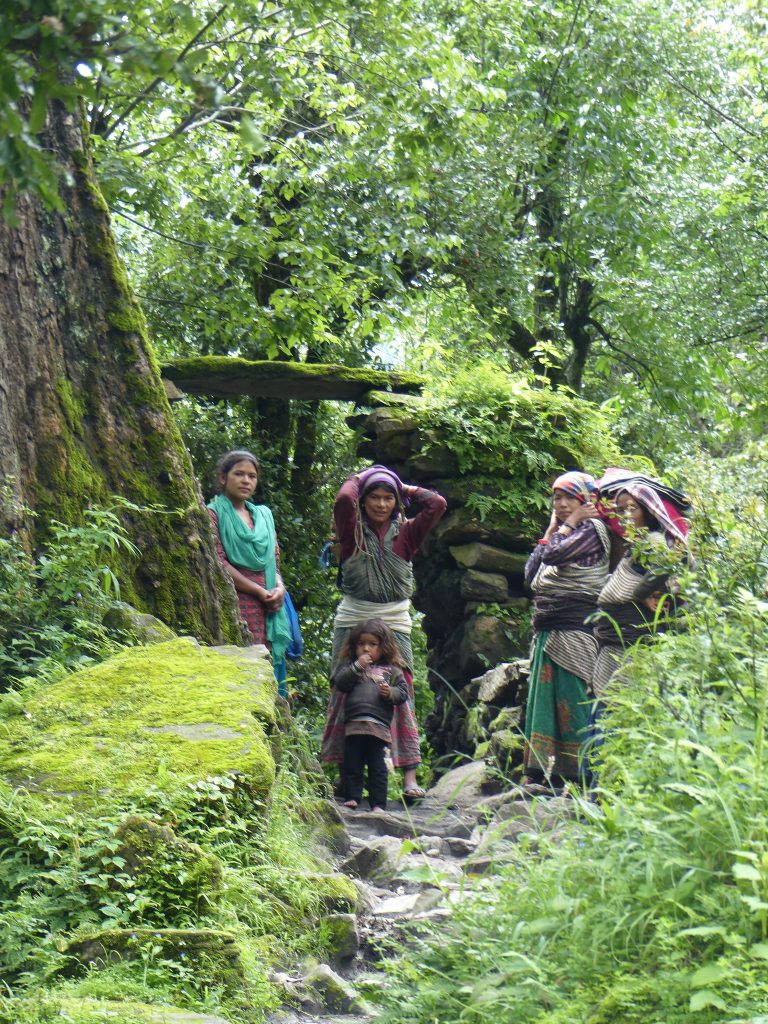 This gate marks the entrance to the village of Kolti on the path to Kuru and is a popular rest stop. 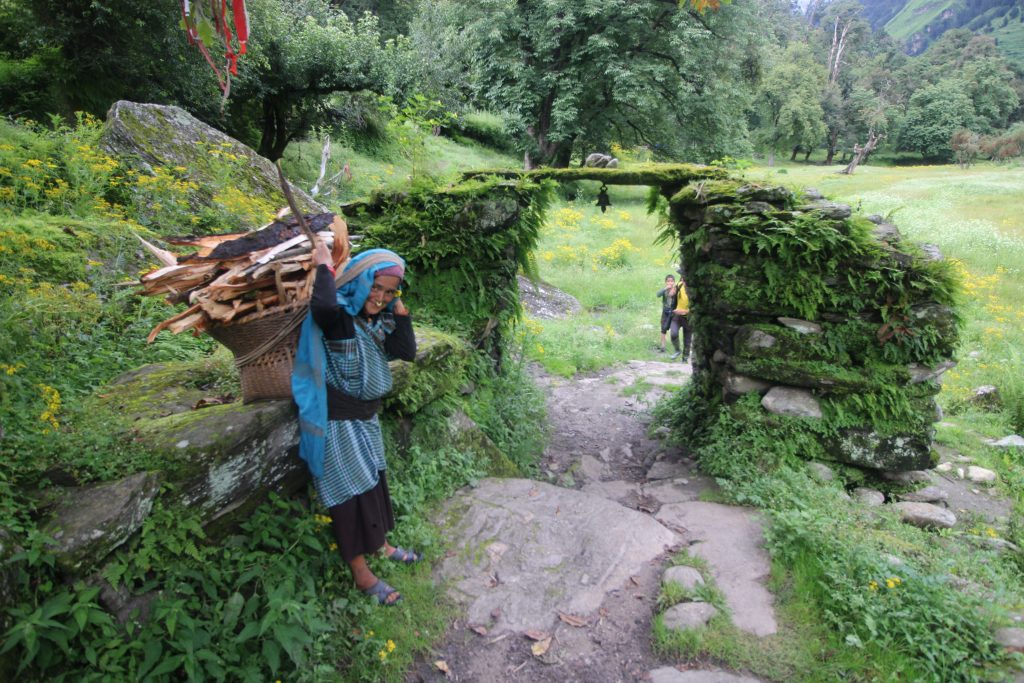 This gate has become home to many ferns, a much more hostile environment than the mountain ridges along the trail. A good spot to rest providing support for the heavy load of firewood. 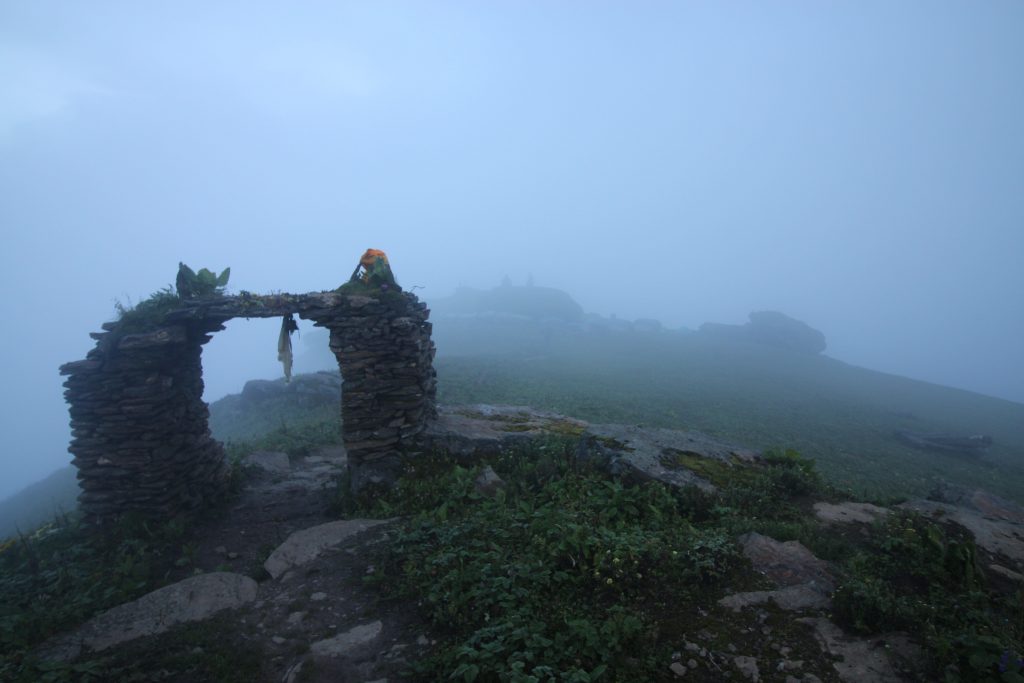