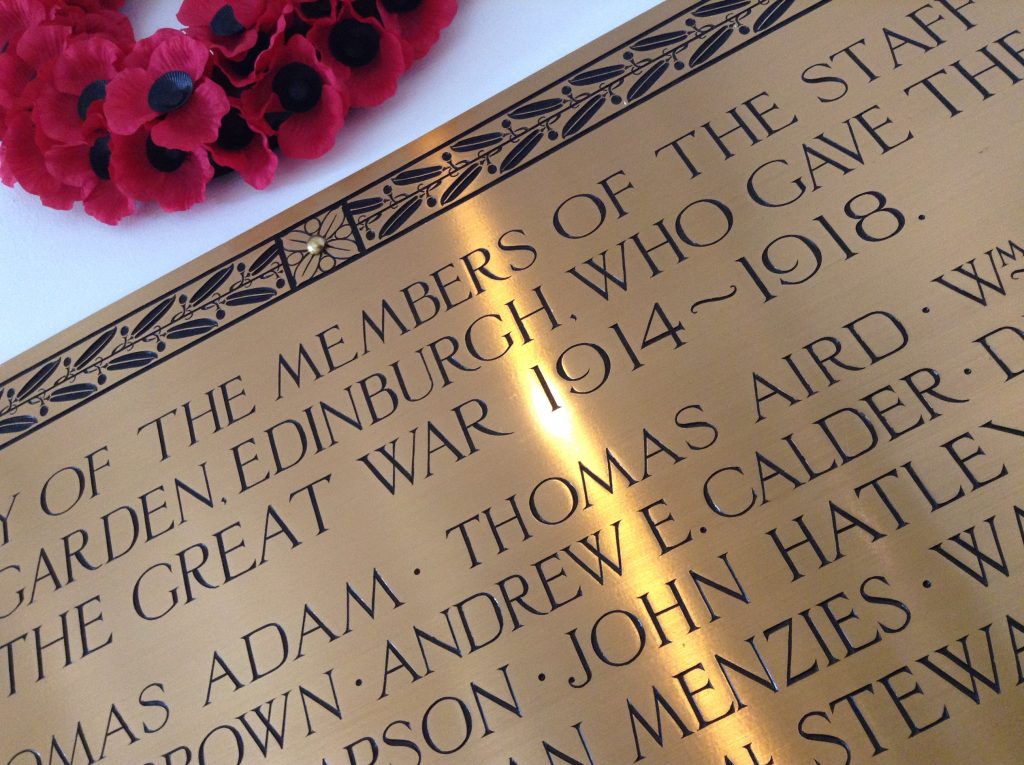 Calder’s name on the First World War memorial in the reception at RBGE.

Andrew Ewing Calder was born in Stockbridge, Edinburgh, on the 12th January 1884 to Robert Calder, a blacksmith, and his wife Sarah Jane, who was a tailoress. Calder married Barbara Abercromby Brown in 1911, and he joined RBGE as a labourer on 27th June 1912 – he had been a biscuit baker prior to that. 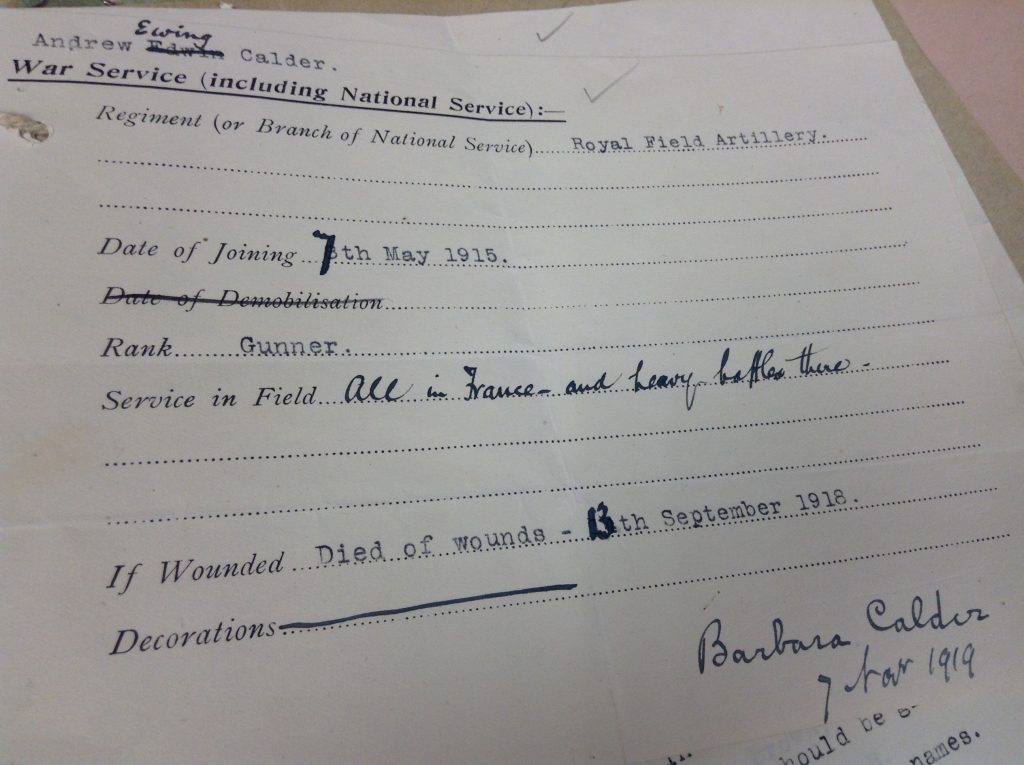 Calder did not immediately enlist at the outbreak of war, leaving it a few months until the 7th May 1915, joining the Royal Field Artillery as a Gunner in ‘B’ Battery of the 78th Brigade. The Royal Field Artillery’s purpose was to provide mobile artillery support to the British Army, being responsible for medium calibre guns and howitzers and usually deployed close to the front line. After some months training in Britain, Calder crossed the Channel on the 5th September 1915, serving in France on the Western Front. His service record summary held at RBGE states that he took part in ‘heavy battles there’; these would have included the Somme in 1916, and Arras and Passchendaele in 1917.

His Brigade also took part in the Battle of Amiens which commenced on the 8th August 1918. This was the opening phase of what was to become the final stages of the Great War with over 7 miles being taken on the first day- the Allied forces were moving rapidly now. It is likely that Calder played some role in these manoeuvres. We know that he was wounded in action, and that he died of these wounds in the 13th General Hospital in Boulogne on the 13th September 1918 at the age of 34, but we don’t know when he was wounded.  Assuming it was on the 13th September, let’s look at his Brigade’s diary for that day (78th Brigade Royal Field Artillery, via ancestry.co.uk):

13th September 1918: from FINS [France, east of Amiens]At 9:50am enemy opened fairly heavy bombardment on our front at a heavier concentration on [the division] on our right. At 9:55 opened slow rate of fire on S.O.S [Sources of Supply?] lines and at 10:05 concentrated all fire on right of DIV: front at 10:25 ceased firing. It transpired that enemy had ‘come over’ from CHAPEL HILL but did not reach our trenches, being repelled by machine gun fire. He left a few dead and wounded and some prisoners were taken. At dusk A/78 and D/78 moved forward … North of DESSART WOOD. About 10pm 2 enemy bombing planes were brought down in flames by A.A. [Anti-Aircraft] fire.
14th September 1918Nothing to report. 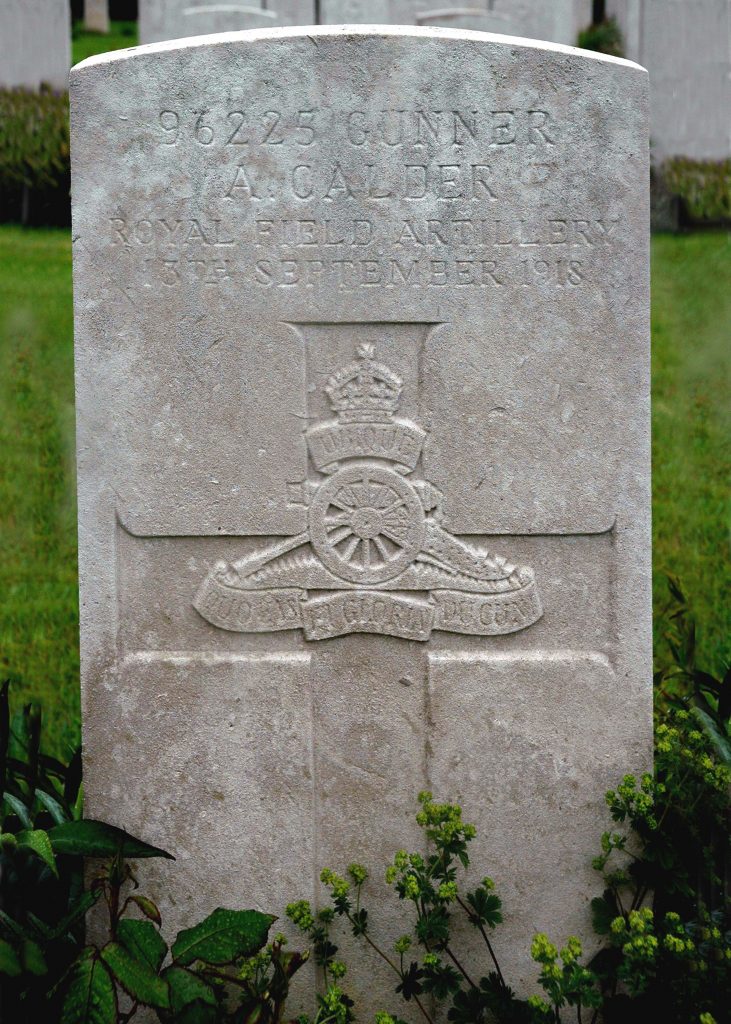 According to the Brigade diary, 36 ‘Other Ranked’ (O.R. or Non Officer Rank) men were wounded in September 1918 with a further 24 gassed, compared to 19 O.R. wounded in August 1918, indicting how the fighting was becoming more intense as the end of the war beckoned.

Calder was not to see the end of the war.  He died on the 13th September 1918 just over three years after he arrived in France. He is buried in Terlincthun British Cemetery in Pas de Calais, France.

We will remember him.

Thanks are due again to Garry Ketchen for doing much of the background genealogical work, and to Steve Rogers at the War Graves Photographic Project for giving permission to use the image of Calder’s grave at Terlincthun British Cemetery.