Protecting Potatoes is a new plant display with interpretation for summer 2018 at the Botanics. It can be found in the Demonstration Garden and the Temperate Palm House, and has been funded by SEFARI. The aim is to highlight the importance of wild potatoes for the future survival of the domesticated spud. 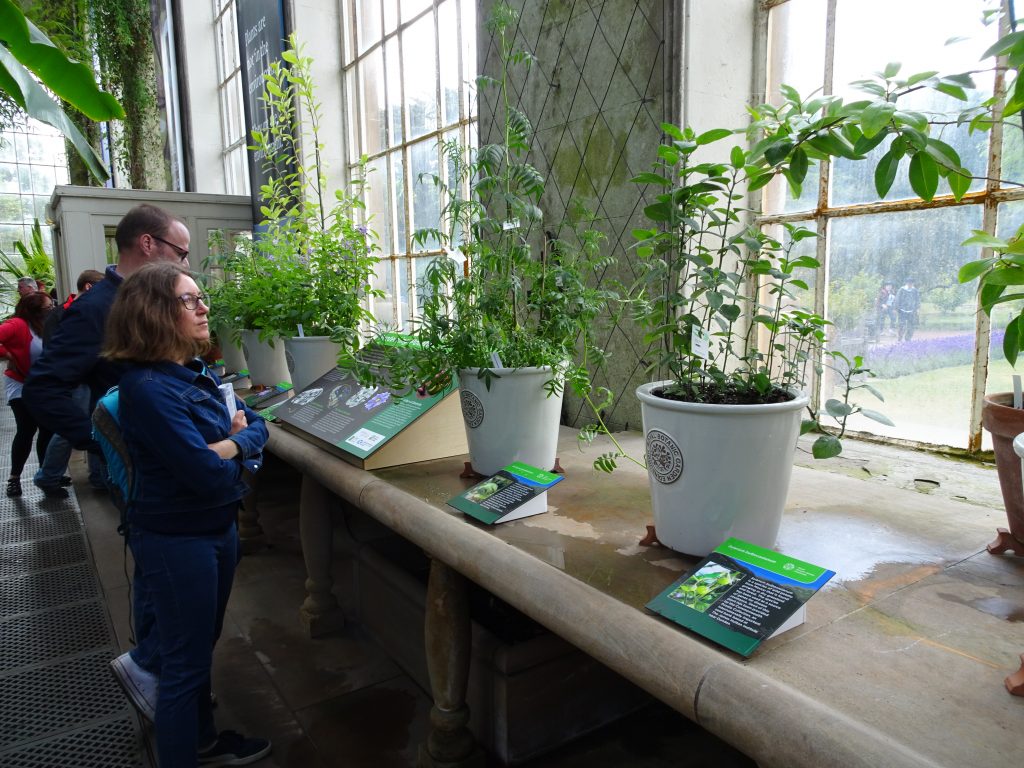 Now, it may not be immediately obvious how wild potatoes can be used to protect what is the fourth most important crop on a global scale. The simple answer is that they have useful genes which can tackle all sorts of threats to the potato crop. This is why research at the Botanics, and in particular at the James Hutton Institute, has focused on the so-called ‘crop wild relatives’ of potato. 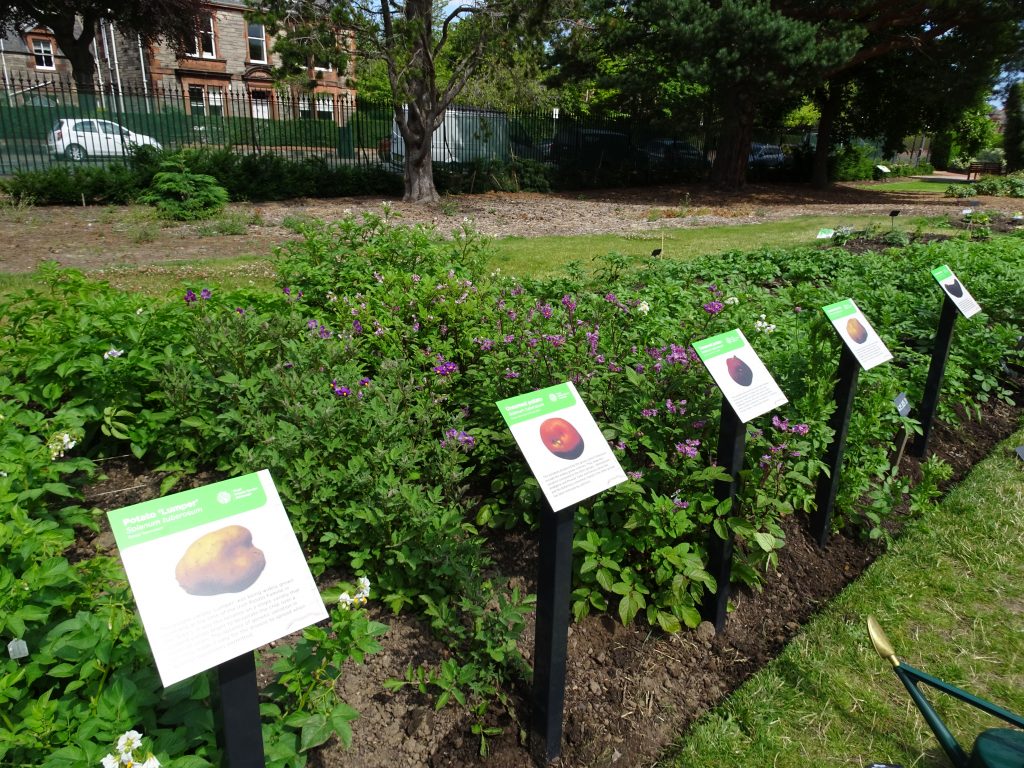 Potato display in the Demonstration Garden. 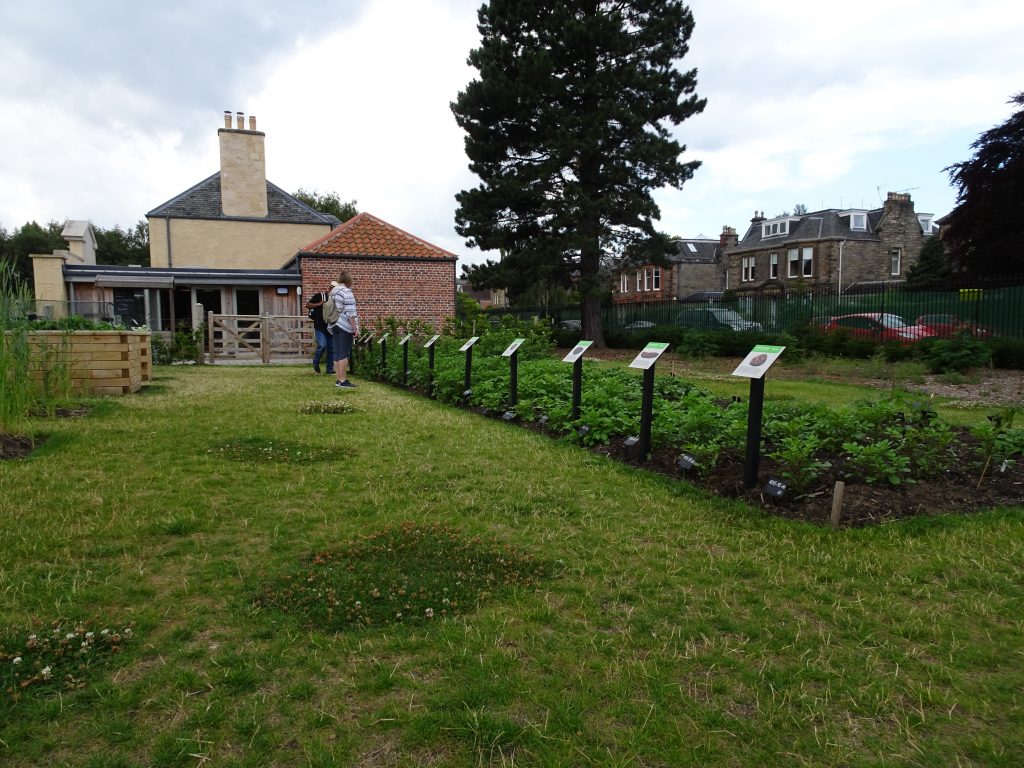 Potato display with the Botanic Cottage in the background.

The Commonwealth Potato Collection, maintained at the James Hutton Institute near Dundee, is the world’s second largest collection of wild potato species, and is of major importance in the fight against potato blight. This fungus-like pathogen contributed to the Irish Famine of the 1840’s, which led to mass emigration to America; arguably changing the course of history. 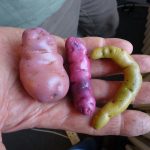 Models that form part of the new interpretation showing the diversity of the cultivated potato Solanum tuberosum.

Working with the James Hutton Institute and SASA we have assembled a display of eight wild potato species. The display includes numerous forms of the domesticated potato.  Amongst these are some unusual and curious looking traditional varieties from the Andes. For historical interest we have included a variety called ‘Lumper’. This was in widespread cultivation in Ireland in the nineteenth century, and was an important factor in the rapid spread of potato blight and the Irish Famine.

Scottish ingenuity was at the forefront of the response to blight in the 1850’s. William Paterson, a Dundee farmer, bred a new disease resistant variety called ‘Victoria’ that is present in the parentage of many potato varieties still widely grown today. Visitors can see Paterson’s ‘Victoria’, named after Queen Victoria, growing alongside ‘Lumper’ which has proved itself to be so vulnerable to blight. 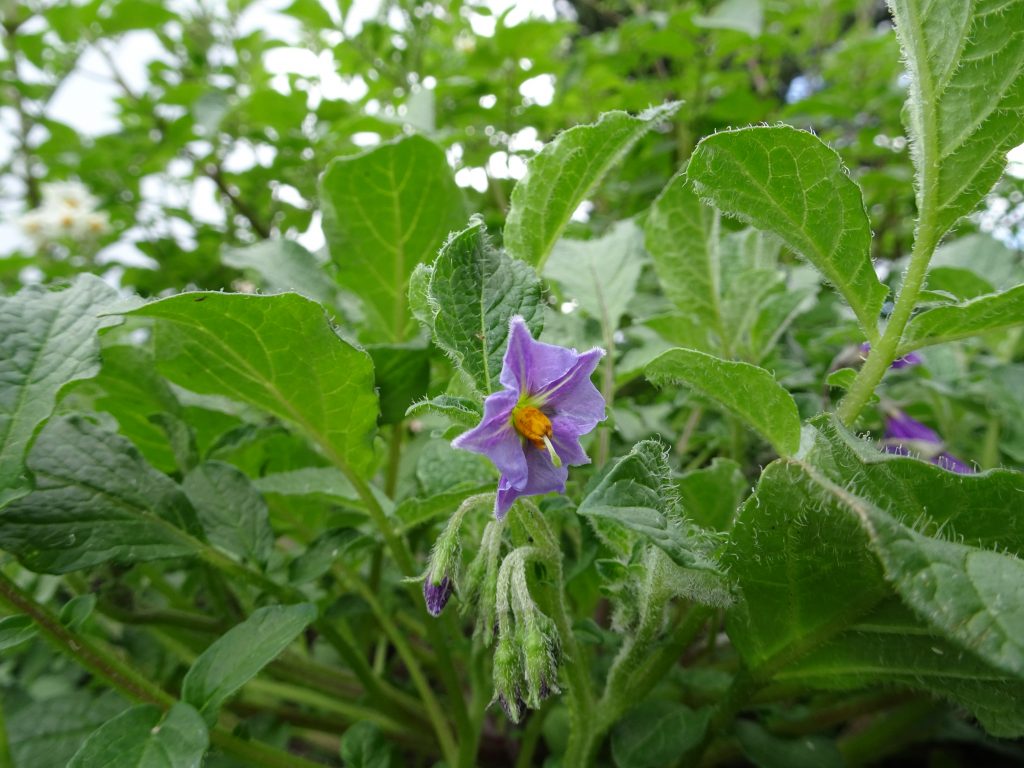 Recently the Royal Horticultural Society released images of a potato specimen collected by Charles Darwin in January 1835 during the voyage of HMS Beagle. This is a timely reminder of the link between domesticated and wild plants. Darwin’s thinking on evolution was heavily influenced by the power of domestication to modify appearance. The young Darwin regarded the potatoes he collected in the Chonos Archipelago off the coast of Chile as wild, but the botanical consensus is that he collected a form of the domesticated potato.

The origin of the domesticated potato (Solanum tuberosum) can be traced to the Andes and the border between Peru and Bolivia. Here potatoes are adapted to the short days found closer to the equator. The potato that Darwin collected is a variant of Solanum tuberosum that is adapted to the long summer days further from the equator. The relationship between these two groups of potatoes is still a matter of debate. 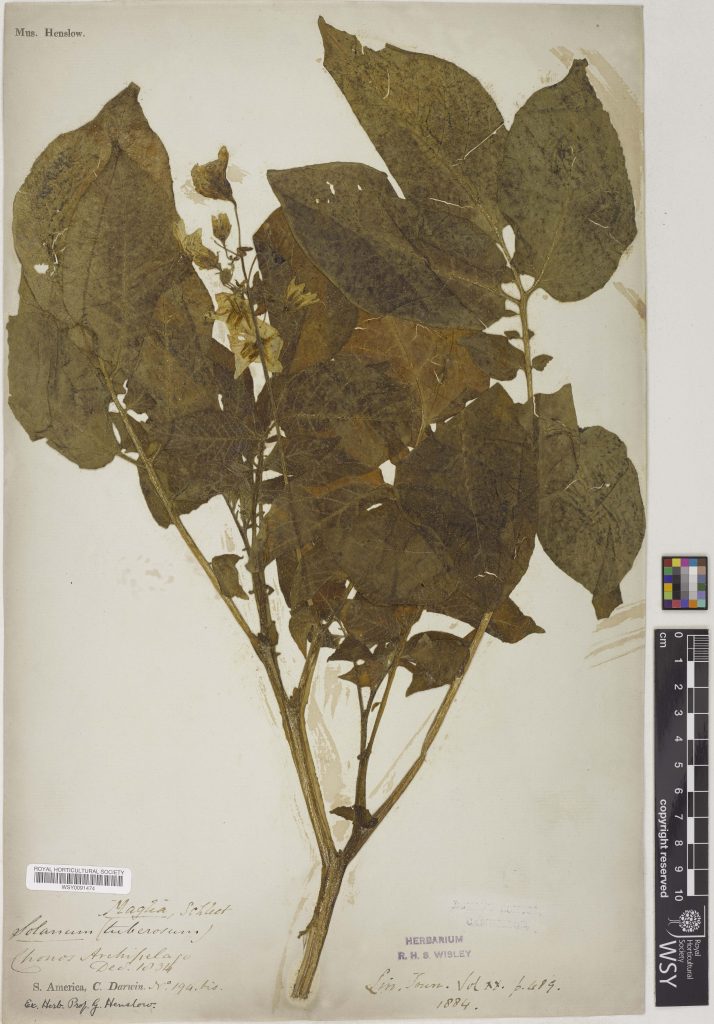 Darwin’s potato exemplifies the reality of the relationship between wild and domesticated plants. Domestication does not cut plants off from their wild relatives. They can continue to benefit from the wider gene pool of their wild relatives. Modern technology can greatly speed up the process of identifying and utilising useful genes in the wild. Domesticated plants can even return to the wild, as Darwin’s potato appears to have done, when the opportunity arises. What is becoming ever clearer is that crop wild relatives are a valuable resource. Modern farming can reap great benefit from the wild in the drive for food security, and protecting biodiversity takes on a whole new perspective that is personal to us all. 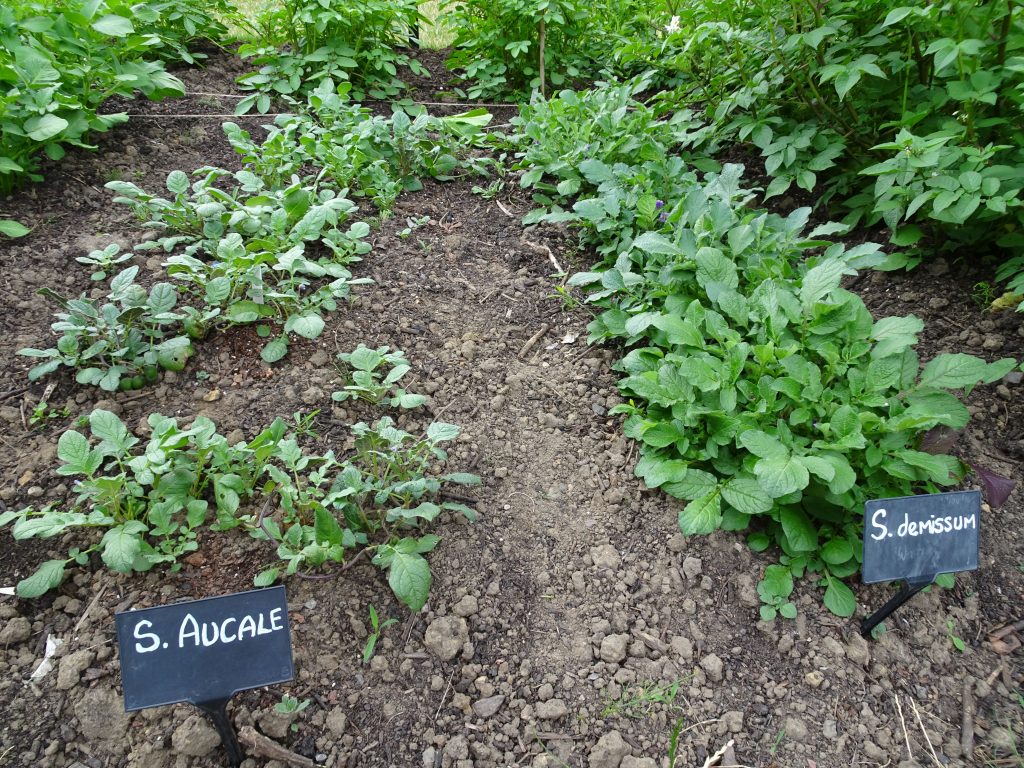 Wild potatoes, S. acaule (left) and S. demissum (right) growing outdoors and flowering well. The S. demissum plants are being used in controlled crosses with domesticated potatoes to recreate S. x edinense, a potato hybrid named after Edinburgh and the RBGE (supplier of the type material for the first description).