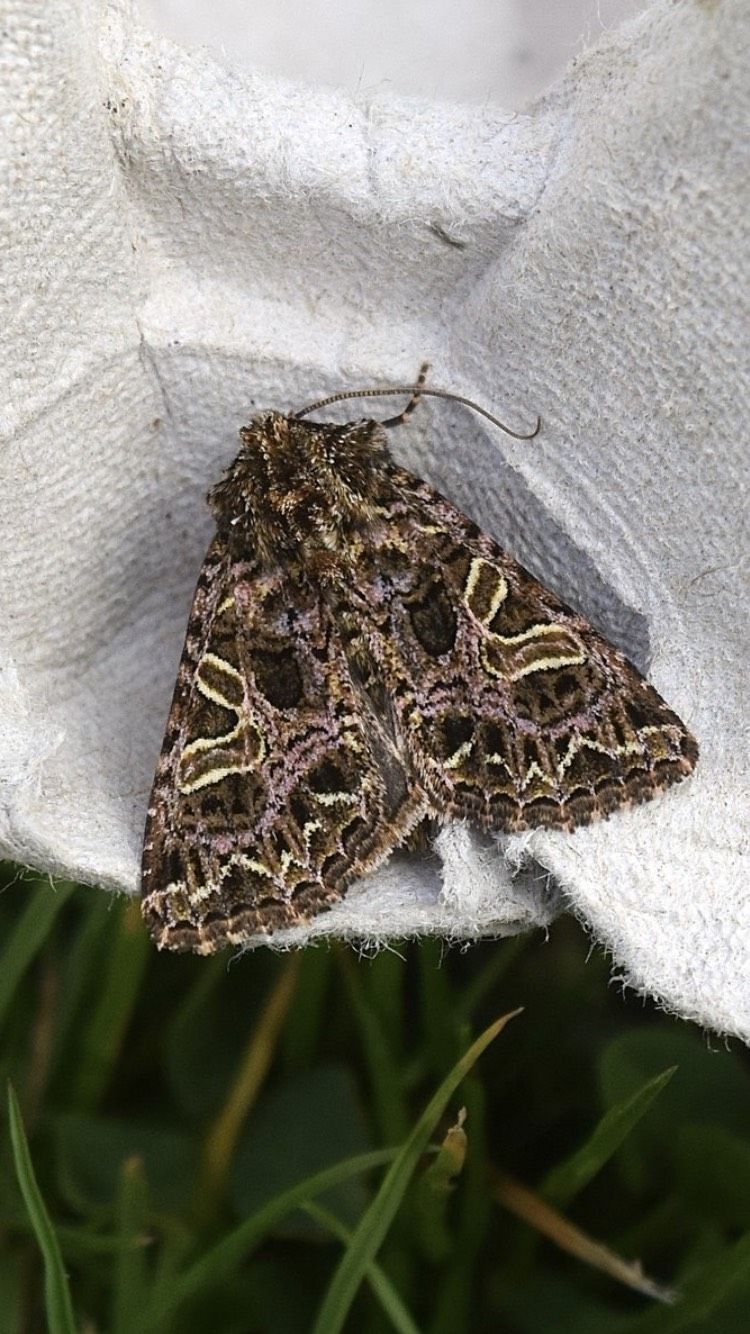 May’s good weather continued throughout June, which was sunny, warm (hot in the second half) and quite dry. 51 mm of rain fell, only 86% of the long-term average, but this disguises the fact that two-thirds of the month’s rain, 34 mm, fell on a single day, the 19th, and the rest mostly on only four other days, there being 19 totally dry days including the last eleven days (and into the beginning of July).  There were 206 hours of sunshine, 124% of the average. Maximum temperatures were 1.1°C above normal, with the highest maximum being 26.5°C   on 25th and the lowest minimum 6.2° on  21st. The Garden’s wildlife list total was ‘unfrozen’ at the Big Botanics BioBlitz on 9 June and ‘species 1000’ was declared to be a rather photogenic moth called The Campion. Lucy Cooke has written a separate post (https://stories.rbge.org.uk/archives/29014) about the BioBlitz. Twenty-nine other new Garden records were added during June (including a few from May that had not been identified): 4 moths, 1 dragonfly, 4 Hymenoptera [2 sawflies, 1 gall wasp, and RBGE’s first ruby-tail wasp record], 2 flies, 7 bugs, 5 beetles, 2 lacewings, 1 barkfly, 1 gall-mite, 2 spiders, and 1 very common but accidentally overlooked mollusc. As well as these, further research into the National Biodiversity Network’s records from RBGE, as well as delving into some literature, unearthed an additional 22 older records (1 caddisfly, 8 beetles, 1 cockroach, 3 pseudo-scorpions, 4 molluscs, 2 millipedes, 3 worms), some of them quite recent and others dating back to the 19th century. The grand total at the end of June therefore stood at 1,051, meaning that 116 species have been added to the Garden’s wildlife list in the first six months of 2018, 111 of them in the April-June quarter.

Birds Thirty-five bird species were recorded at the Edinburgh Garden during June, five fewer than in May but a respectable total nonetheless for the month of June, when spring migration has largely ended and birds tend to become quieter as the breeding season ends for some species. We had confirmation that a pair of Nuthatches had bred for the first time in the Garden this season and fledged young – wonderful news.  A Canada Goose visited on 1st and this year’s first Tawny Owl record was made during the BioBlitz night-time walk (8th), but otherwise there were no notable sightings. There were a further seven sightings of Swifts overhead and Swallows were recorded twice (17th and 28th). The complete list of 35 species recorded during June 2018 was: Blackbird, Blackcap, Blue Tit, Bullfinch, Canada Goose, Carrion Crow, Chaffinch, Chiffchaff, Coal Tit, Dunnock, Feral Pigeon, Goldcrest, Goldfinch, Great Spotted Woodpecker, Great Tit, Greenfinch, Grey Heron, Herring Gull, Jackdaw, Kingfisher, Lesser Black-backed Gull, Long-tailed Tit, Magpie, Mallard, Moorhen, Nuthatch, Robin, Song Thrush, Sparrowhawk, Swallow, Swift, Tree Creeper, Wood Pigeon, Wren. 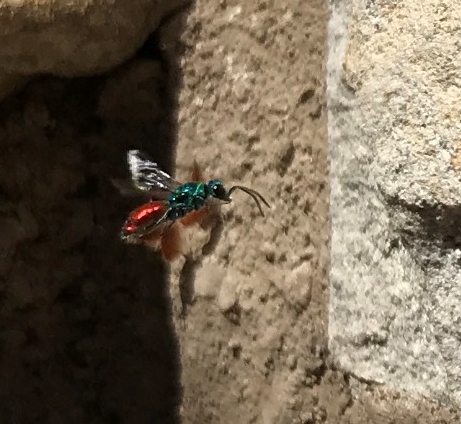 Insects and other invertebrates: June was a poor month for butterflies despite the good weather. As in May, five species were recorded: Orange Tip (three dates all in the first week), Green-veined White (7th), Small White (twice), and Red Admiral and Painted Lady (both on 27th). That was more than made up by the 33 moth species recorded mainly during trapping sessions weekly and during the BioBlitz on 9th. Twenty-seven species were trapped at the BioBlitz, 19  of them only on that occasion. They included The Campion, one of four new Garden records for the month and which was declared the Garden’s 1000th wildlife species. The three other new moth records were Common Swift on 9th and Green Arches and Barred Fruit-tree Tortrix both on 27th. Honey Bees, the seven common bumblebees, and Common Wasps were all active throughout June, while Wool Carder Bees were seen in small numbers from 6th. Two different leaf-cutter bees, Megachile centuncularis and M. willughbiella, were seen on 22nd, and two other rather scarce bees, Halictus tumulorum and Anthophora plumipes, on 26th. An unusual wasp (22nd) turned out to be the ruby-tail wasp Chrysis cf. ignita. Ruby-tail wasps are a hard-to-identify group of species that parasitize solitary wasps. The sawfly Tenthredo mesomela,  another new Garden record, was seen during the BioBlitz, as were two other new Garden records of galls formed by another sawfly Euura bridgmanii on willow and by the marble gall wasp, Andricus kollari, on oak. June’s only dragonfly was a Four-spotted Chaser seen by a visitor on 27th which was a new record for the Garden. Seven hoverfly species were recorded during June, three of them for the first time this year: Narcissus fly (4th, 9th and 21st) and Chrysotoxum arcuatum and Eupeodes corollae (both on 26th). Leaf-mining flies, or at least their mines, began to be evident, with nine species recorded, six of them for the first time in 2018.  New Garden fly records included the crane-fly Tipula varipennis (18th May), and the Murky-legged Black Legionnaire (9th June). Records of bugs included Forest Shield-bug, Hawthorn Shield-bug, Gorse Shield-bug, Common Nettle-bug and Deraeocoris lutescens all on 9th, Parent Bug (9th and 21st), Common Flower Bug on 21st, the leaf-hopper Oncopsis flavicollis on 9th,  Common Froghopper (throughout), and two water bugs recorded during BioBlitz pond-dipping, Common Pond-skater and Common Backswimmer. Water Cricket (15th May, previously unidentified) was a new Garden record. Other new Garden bug records were Javesella pellucida (9th) and four psyllid bugs: Psylla betulae (7th and 9th on birch), Trioza urticae (9th on stinging nettle), Trioza galii (9th on cleavers Galium aparine) and an as yet unidentified psyllid on Angelica that was probably a species belonging to the carrot psyllid (Trioza apicalis) species complex, the only British psyllid complex to favour umbellifers.  Once again four ladybird species were recorded during June: 10-spot Ladybird (1st), Cream-spot Ladybird (9th), 7-spot Ladybird (9th and 15th) and 2-spot Ladybird (four dates). New beetle records included two from May that had remained unidentified (Lochmaea caprea on 7 May and Common Sun Beetle Amara aenea on 15 May) and three recorded during the BioBlitz on 9th, namely the Blue Willow Beetle Phratora vulgatissima, the soldier beetle Rhagonycha lignosa and the weevil Strophostoma melanogrammum. Other notable beetle records included Grey Sailor Beetle and its close ally the Common Yellow Soldier Beetle as well as Clay-coloured Weevil all on 9th.  Two lacewings, Hemerobius micans and Micromus variegatus, both recorded on 9th, were both new Garden records, as was the barkfly, Amphigerontia bifasciata (also on 9th). Six spiders were recorded during the BioBlitz, two of them (Walnut Orb-weaver Nuctenea umbratica and Common Wolf-spider Pardosa pullata) being new Garden records. Several gall mites were recorded during June, with Aceria macrocheluserinea (31st May, 9th and 26th June) being a new Garden record. A Dusky Slug Arion subfuscus as well as a member of the Great Black Slug Arion ater complex were seen on 9th, as well as another Garden Snail. The latter species, to my surprise, had been accidentally omitted from the Garden’s full wildlife list despite having been recorded on numerous previous occasions, and therefore counts as a new record! Two terrestrial woodlice species and a water louse were recorded during June. Finally, my four-year old grandson spotted a millipede in the fork of a low tree on 9th that turned out to be the first record since 1987 of Proteroiulus fuscus! 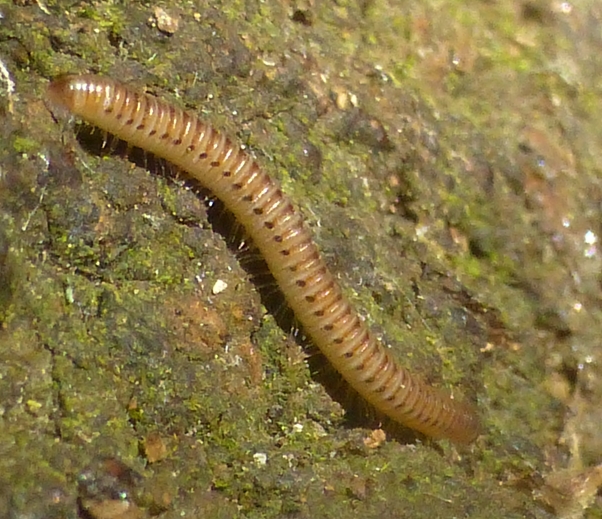