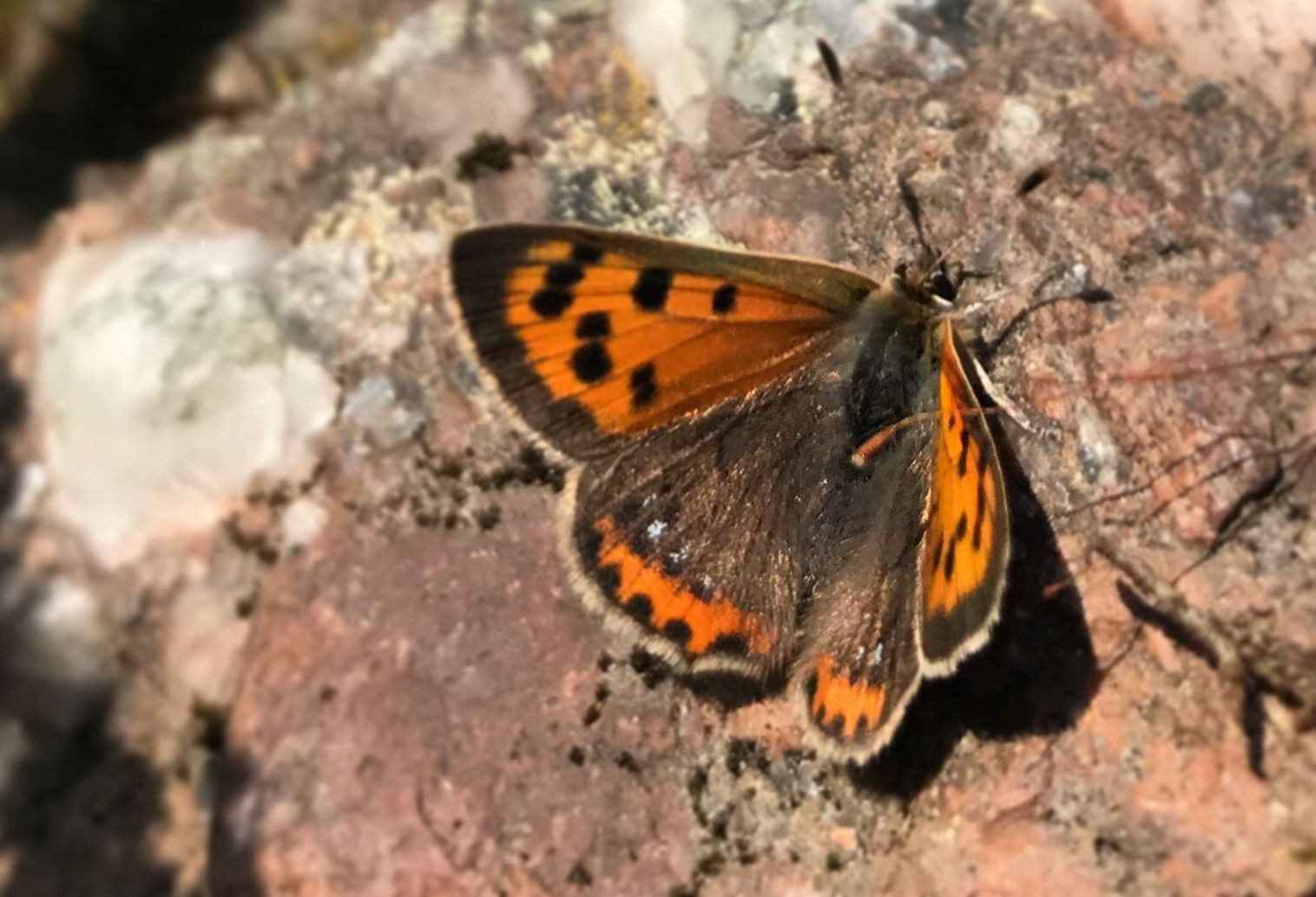 In contrast to April, May 2018 was warm, dry and sunny. Less than 17 mm of rain fell, only 34% of the long-term average, while there were 213 hours of sunshine, 114% of the average. Maximum temperatures were 2°C above normal, with the highest maximum being 22.5°C   on 6th and the lowest minimum -0.1° on  1st. Almost 10 mm of the month’s rainfall fell on a single day, 12th, when there were nevertheless also more than 10 hours of sun. There were only four other days when more than a trace of rain fell. The Garden’s wildlife list at the end of May remained ‘frozen’ at 999 because the finding of our 1000th species was being left to the Big Botanics BioBlitz on 9th June. My full retirement from RBGE took place on 18th, so my own recording efforts will be less regular now than before, although I remain one of the Garden’s Research Associates. Lucy Cooke, who has already been  making lots of additions to the wildlife list, is taking over much of the responsibility from me and I take this opportunity of thanking her for this and wishing her ‘good hunting’.

Birds Forty bird species were recorded at the Edinburgh Garden during May, two fewer than in April. The month’s ‘star bird’ was a probable Redstart heard singing on 17th, presumably on passage; similar one-off occurrences of this species took place in 1964 and 1935. A Cuckoo was heard in the Garden on 18th. Other brief visits included a Garden Warbler (7th), Kingfisher (8th), and Swallow (24th and 25th). Several Chiffchaffs were present throughout May although possibly fewer than in some recent years; at least three were singing in various parts of the Garden. However, once again, no Willow Warblers set up territory in the Garden although several passed through last month. Nuthatch was recorded on 1st but was elusive, though no doubt present, for the rest of the month. Swifts were seen overhead on seven different dates, from 10th. A single Black-headed Gull on 8th was presumably a non-breeder as at this time of year they vacate Edinburgh for their breeding sites elsewhere. The complete list of 40 species recorded during April 2018 was: Blackbird, Blackcap, Black-headed Gull, Blue Tit, Bullfinch, Buzzard, Carrion Crow, Chaffinch, Chiffchaff, Coal Tit, Cuckoo, Dunnock, Feral Pigeon, Garden Warbler, Goldcrest, Goldfinch, Great Spotted Woodpecker, Great Tit, Greenfinch, Grey Heron, Herring Gull, Jackdaw, Kingfisher, Lesser Black-backed Gull, Long-tailed Tit, Magpie, Mallard, Moorhen, Nuthatch, Oystercatcher, Redstart, Robin, Song Thrush, Sparrowhawk, Stock Dove, Swallow, Swift, Tree Creeper, Wood Pigeon, Wren. 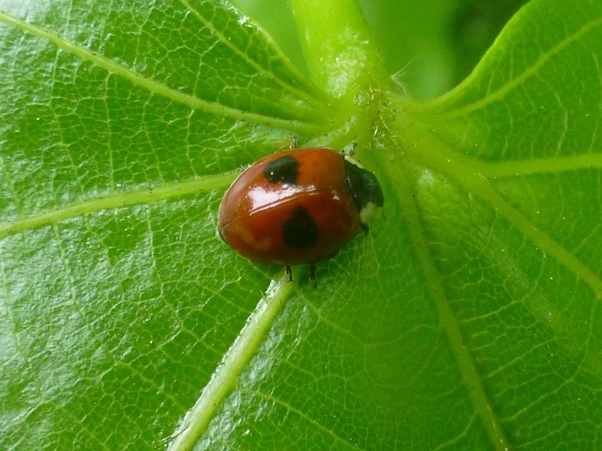 Insects and other invertebrates: Five butterfly species were recorded during May: Orange Tip (9 dates), Small White (6 dates), Green-veined White (14th and 18th), Small Tortoiseshell (25th) and Small Copper (25th), the last a very welcome record as the species is not seen every year. Weekly moth trapping sessions continued but despite the mostly clement weather relatively few species, and numbers, of moths were recorded. They included Dark Sword-grass (10th), a second record of Brindled Pug (11th), Clouded Drab, Grey Pine Carpet and Spruce Carpet (all on 14th), Garden Carpet (18th), Flame Carpet (24th), a tiny Least Black Arches (17th) and a Silver Y on 31st. A migrant Diamond-back was seen in the Rock Garden on 30th. The leaf-mine of the invasive Horse Chestnut Leaf-miner was spotted on 31st. Honey Bees and Common Wasps were recorded throughout May, as were the seven common bumblebee species (Tree Bumblebees being particularly numerous). A Forest Cuckoo Bee was also seen (1st), as well as a Gypsy Cuckoo Bee (23rd). Other hymenopteran records included  Chocolate Mining-bee (7th, 16th and 18th), Marsham’s Nomad Bee (7th), Bugle Sawfly (30th) and an adult Solomon’s Seal Sawfly on 15th (the larvae were seen for the first time in the Garden last year). Nine hoverfly species were recorded during May, seven of them for the first time this year: Striped Hoverfly Helophilus pendulus (14th, 16th and 31st) and its look-alike Parhelophilus versicolor (31st), Platycheirus albimanus (16th), Furry Dronefly Eristalis intricarius (18th),  Common Banded Hoverfly (from 7th; always slightly later than Hairy Banded Hoverfly which was also seen), and Eupeodes luniger and Marmalade Hoverfly (both on 31st). Probably the year’s last sighting of Greater Bee-fly was on 1st; other fly records were Pollenia rudis on 2nd and Suillia affinis on 15th. A Common Blue Damselfly was photographed in the Ecological Meadow on 25th.  Bugs included Forest Shield-bug on several dates, Hawthorn Shield-bug (18th), Parent Bug (16th), the leaf-hopper Edwardsiana lethierryi on 23rd,  Common Froghopper (30th), Beech Woolly Aphid (17th and 31st), Common Sycamore Aphid (18th and 31st), and the gall of the Elm-currant Aphid (23rd). Four ladybird species were recorded during April: Pine Ladybird (three dates), 7-spot Ladybird (1st) and 2-spot Ladybird (30th). Other beetle records included two poplar leaf beetles (Phratora vitellinae from 1st, P. laticollis from 9th) and the St John’s Wort leaf beetle Chrysolina hyperici on 31st, Vine Weevil (3rd),  the weevil Phyllobius maculicornis on its favourite hornbeam hedge in the Queen Mother’s Garden (31st), and Figwort Weevil (also on 31st). A ground beetle seen on 15th remained unidentified at the end of the month. One springtail, Entomobrya nivalis, was spotted (3rd). Gall-mites made their first appearances of 2018, with three species being recorded on lime leaves, one on alder and an unidentified species on sycamore. Finally, a Garden Snail was seen on 30th and a White-legged Snake Millipede on 7th. 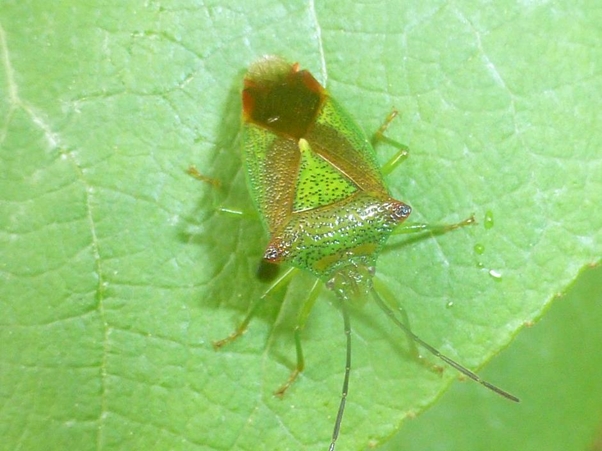