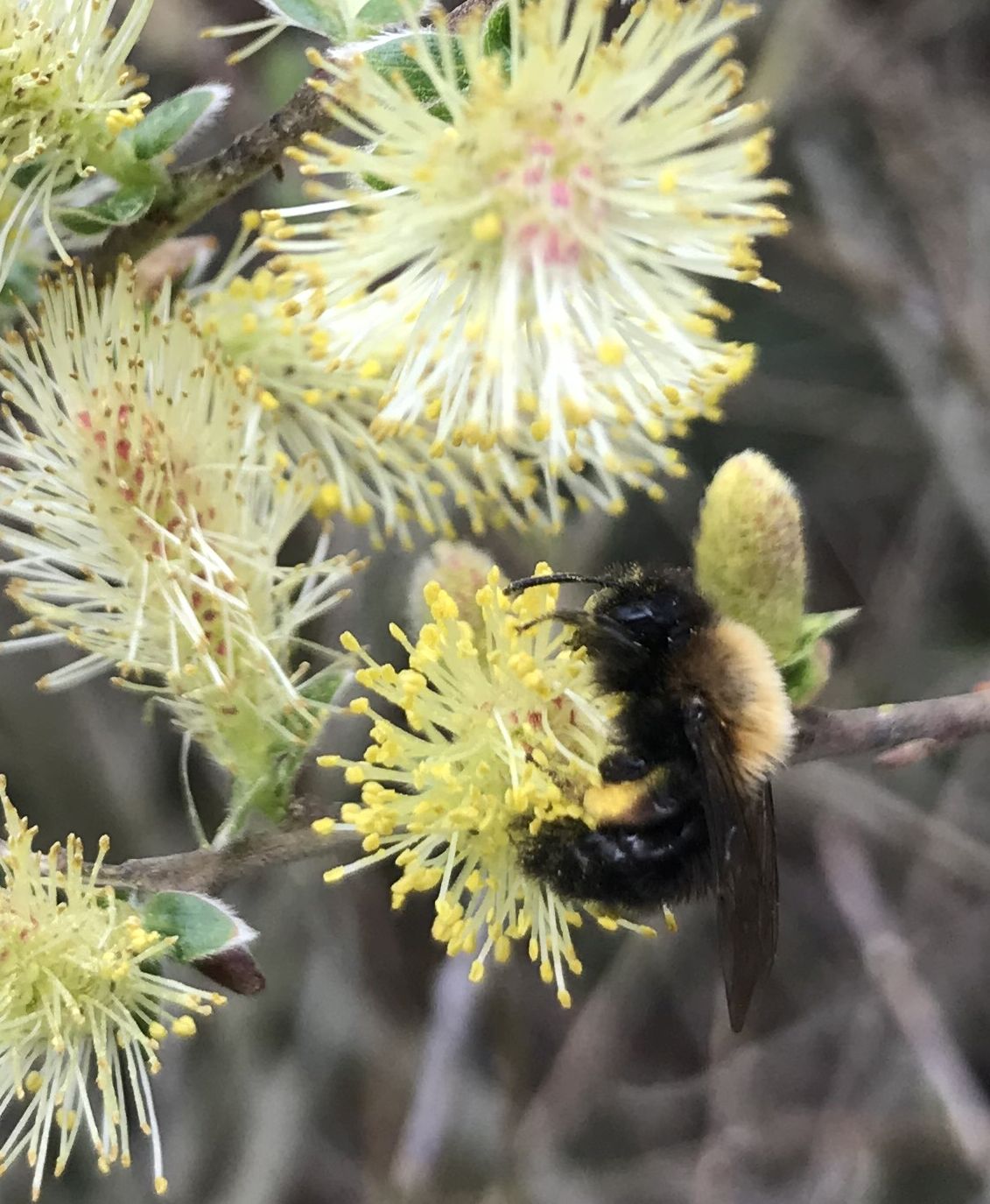 April 2018 began as March had ended – snow, rain and cold. Flooding throughout the Garden on 4th meant that it had to be closed as none of the main paths and roads were passable. However, there was a dramatic change to dry, sunny and warm conditions in the middle of the month. The end of the month was cooler again but still quite dry and bright.  The rainfall total was 69 mm (166% of the long-term average) and there were 161 hours of sun, slightly above average. The highest daytime maximum temperature was 20.6°C on 19th while the lowest minimum was -2°C on 5th. Six moths and one mining-bee were added to the Garden’s list, but one other moth was found to be in the list twice under two different scientific names (its correct one and a synonym), so there was a net increase of six, taking it from 940 to 946. Research among historical (pre-1997) published Garden wildlife records (in books, journals and online databases), summarised in another Botanics Story (https://stories.rbge.org.uk/archives/28661, posted on 3 May) yielded a further 5 mammals, 21 birds, one butterfly, one moth and 25 other invertebrates. The total Garden wildlife list at the end of April was therefore 999. The (hopeful) finding of the ‘1000th species’ is being left to the Garden’s ‘Botanics Big Wildlife Day’ event on Saturday 9 June.

Birds Forty-two bird species were recorded at the Edinburgh Garden during April. A ‘redhead’ Goosander and a Dipper both paid a visit during the deluge on 4th. Single Cormorants overflew the Garden on both 9th and 10th. Nuthatches were seen or, more usually, heard throughout the month and were particularly vocal in the second half. The first Chiffchaff finally arrived on 7th.  This was the second-latest arrival date since I have kept such records (2007), the latest by far being 19 April 2013. The earliest arrival of a non-wintering Chiffchaff has been 18 March, in 2009, but in 2014 there was at least one over-wintering bird in the Garden. This is much less frequent in Chiffchaffs than in Blackcaps. Willow Warblers also arrived late, the first not being heard singing until 17th. Swallows were seen on 14th, 15th, 23rd and 26th, and Blackcaps were singing from 24th onwards. The last Redwing was seen on 9th. Kingfisher was seen on only three dates in April, an indication that they might have gone away to breed. The complete list of 42 species recorded during April 2018 was: Blackbird, Blackcap, Black-headed Gull, Blue Tit, Bullfinch, Canada Goose, Carrion Crow, Chaffinch, Chiffchaff, Coal Tit, Cormorant, Dipper, Dunnock, Feral Pigeon, Goldcrest, Goldfinch, Goosander, Great Spotted Woodpecker, Great Tit, Greenfinch, Grey Heron, Herring Gull, Jackdaw, Kingfisher, Lesser Black-backed Gull, Long-tailed Tit, Magpie, Mallard, Moorhen, Nuthatch, Oystercatcher, Redwing, Robin, Siskin, Song Thrush, Sparrowhawk, Stock Dove, Swallow, Tree Creeper, Willow Warbler, Wood Pigeon, Wren. 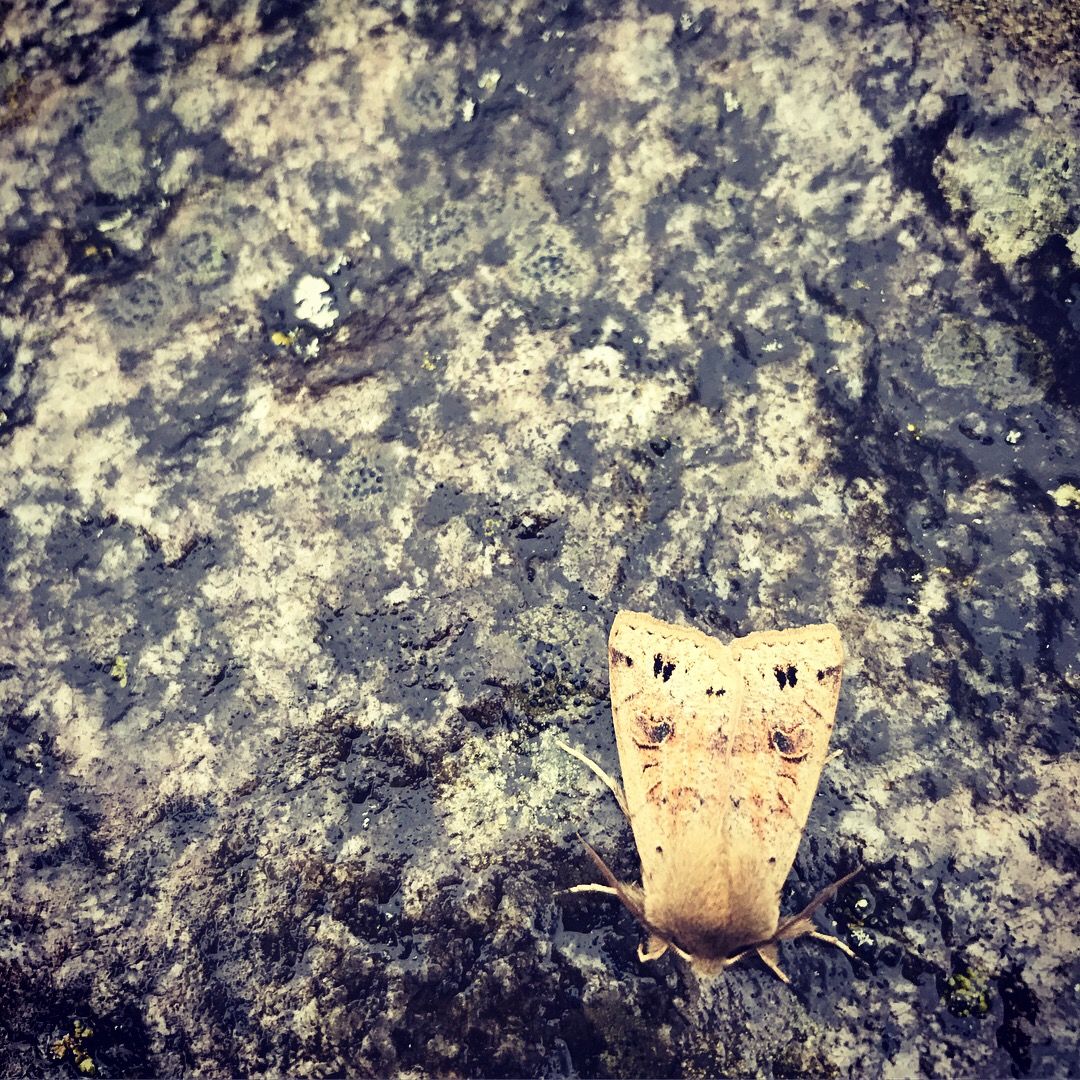 Insects and other invertebrates: April was much better than March for invertebrate records at the Garden. The first butterflies of the year were seen, the first being a Peacock on 9th with two other sightings on 19th and 20th. Three other species were recorded: Small Tortoiseshell (a dead one on 13th, a live one on 19th), Comma (19th and 20th) and Small White (19th). It is hardly a coincidence that all four of the above species were recorded on the 19th, the month’s warmest day.  Twelve moth species were recorded in the weekly trapping sessions. Six of them represented new Garden records: Pine Beauty, Early Grey, Brindled Pug, Double Striped Pug and March Tubic (all on 20th, with some also recorded on other dates), and Lichen Button on 21st. The other six were Hebrew Character, The Chestnut, Common Quaker, Twin-spotted Quaker, Clouded Drab and Yellow-barred Brindle. Perhaps surprisingly, there were only two sightings of Honey Bees in April (17th and 18th, leading up to the warmest day). All the common bumblebee species made their appearance, though: Garden Bumblebee from 6th, Tree Bumblebee from 9th (yes, this has rapidly become one of the Garden’s common bumblebee species after first being recorded in 2014), Early Bumblebee also from 9th, and both White-tailed and Large Red-tailed Bumblebees as well as Common Carder Bee all from 18th. A Forest Cuckoo Bee was also seen (21st). Among the solitary bees, Clark’s Mining-bee, seen on willow catkins on 21st and 23rd, was a new Garden record, while Orange-tailed Mining-bee and Red Mason Bee were also reported (25th and 27th respectively). Common Wasps were seen on numerous occasions and Black Ant once (on 17th).  Hairy-eyed Banded Hoverflies were seen on several dates in the second half of April (from 17th).  Greater Bee-flies were seen probing (usually blue) flowers with their very long probosces from 19th onwards. The only bugs seen were a Forest Shield Bug nymph on 17th and a Common Pond Skater on 24th.  Four ladybird species were recorded during April: Pine Ladybird (twice), 10-spot Ladybird (two different variants, on 9th and 25th), 7-spot Ladybird (19th) and Orange Ladybird (19th). Once again, no barkflies or springtails were recorded during the month – 2018 has so far been very barren for these groups. Another True Lace-weaver spider (19th, the Garden’s second record) was the month’s only spider record. 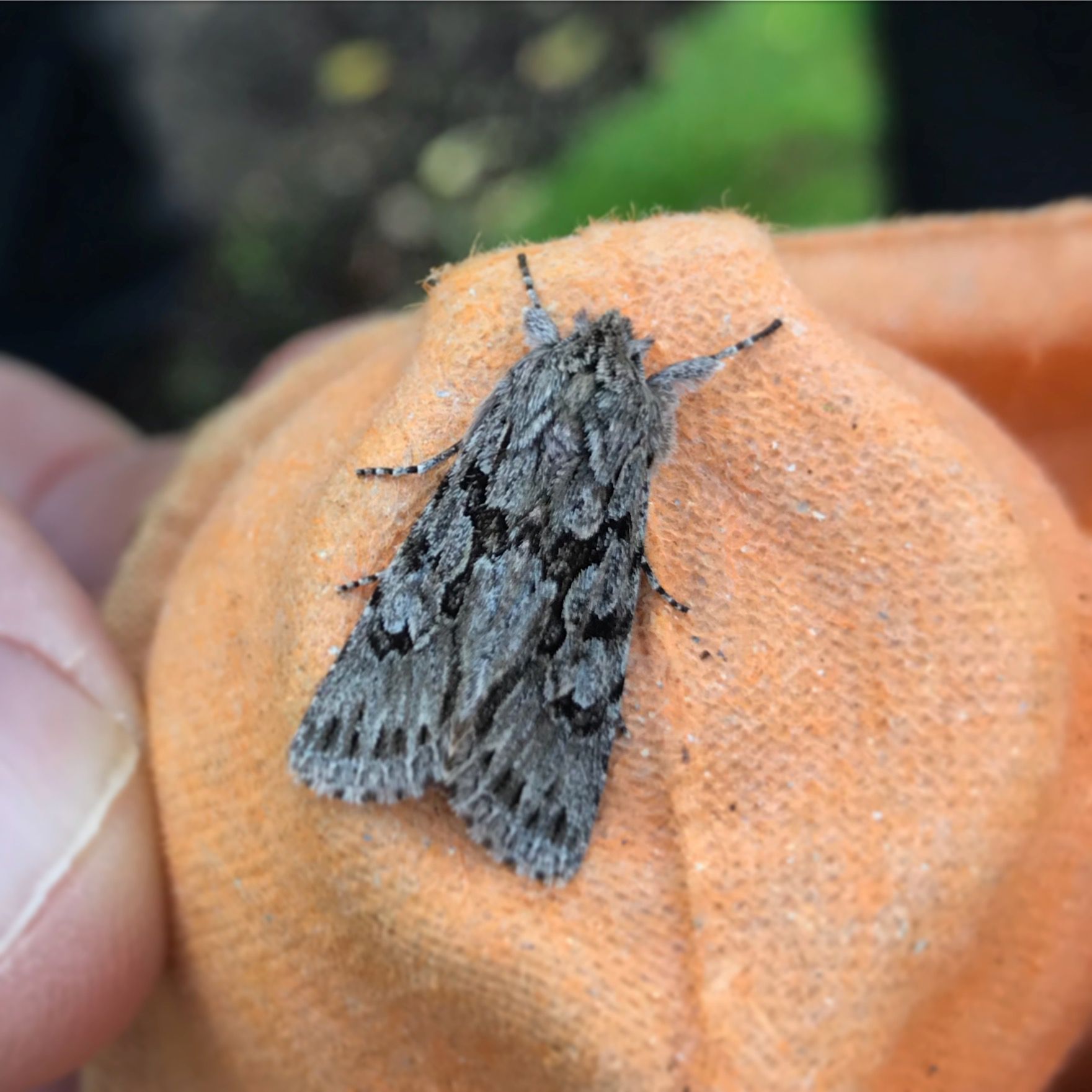