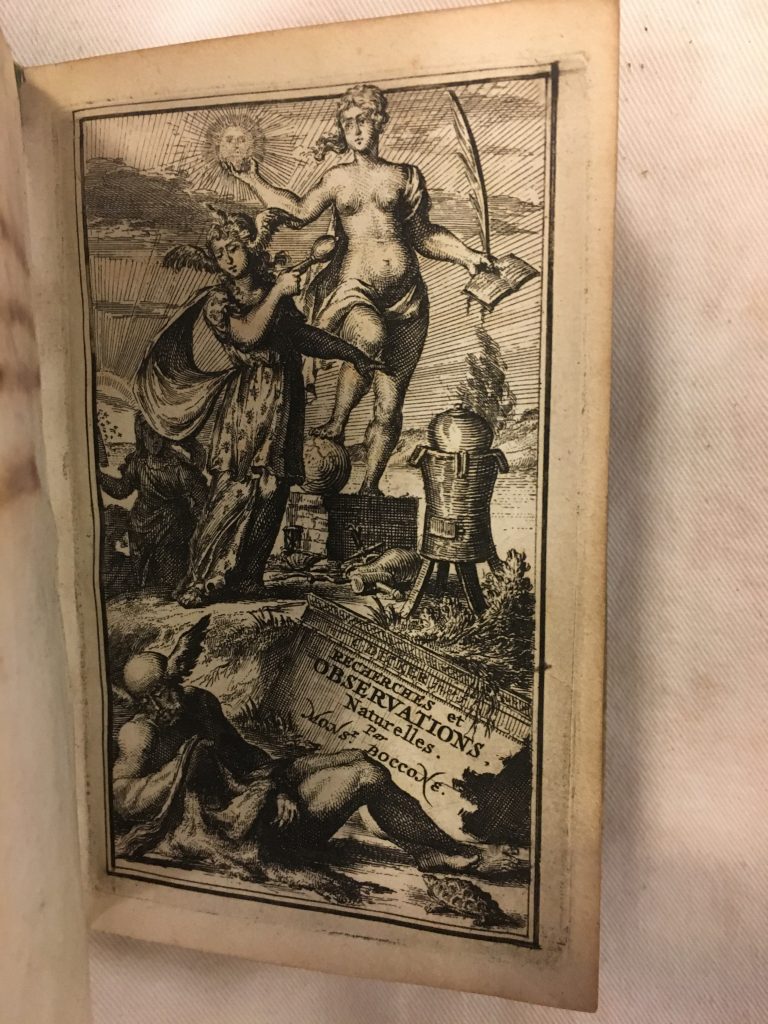 Paolo Boccone’s Recherches et Observations Naturelles de Monsieur BOCCONE, Gentilhomme Sicilien…, published in the translated French in 1674 in Amsterdam, offers several tantalizing clues of provenance to the would-be book history sleuth. On the inside front cover, there is a small bookplate  reading, ‘James Hardy, Oldcambus.’ On the flyleaf, a previous inscription has been vigorously redacted. And, finally, on the title page there is an ink armorial stamp reading, ‘Med Palat Bibl Caes’. Taken together, these clues can provide us with a means of tracing the journey of this book from its beginnings in Amsterdam to its final home in the Rare Books Collection at the Royal Botanic Garden Edinburgh.

Beginning with what is likely the earliest clue of provenance (apart from the publishing information), I researched the use of the armorial stamp on the title page. Using the resources available through the National Central Library of Florence (la Biblioteca Nazionale Centrale Firenze), catalogue records from the Production and Reading of Music Sources Project (a collaboration between several U.K. universities), as well as sale records available through Sotheby’s, I was able to pinpoint the library that used this stamp and the dates the stamp were used. 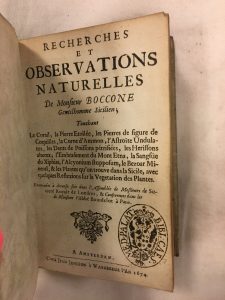 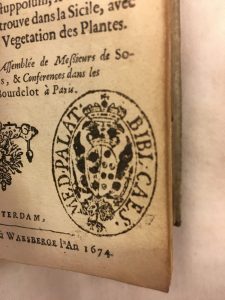 ‘Med Palat Bibl Caes’ signifies the Biblioteca Palatina-Mediceo-Lotaringia, the Library of the Medici and Lorraine Grand Dukes, and the particular armorial stamp on the RBGE’s copy was used between 1745 and 1760. In 1771, the library was dissolved and transferred by the Grand Duke Pietro Leopoldo to the Biblioteca Magliabechiana (which later became the National Central Library of Florence). However, not all of the books were transferred—some were sold and others were distributed among various individuals. It is likely that this copy of Recherches et Observations was not transferred, as it does not contain a label from the Magliabechiana. Many of the other volumes containing the Palatina stamp that I looked at in my research contain such labels on the inside front board as well as notes such as ‘Provenienza Med. Palat no. 278’ (indicating that the volume was acquired during the merging of the libraries). Furthermore, it is noted on the website of the Biblioteca Nazionale Centrale Firenze that during this period the library’s administration put pressure on the librarian to dispose of duplicate copies and multiple editions. Thus, it is possible that this copy of Boccone was seen as superfluous and sold. 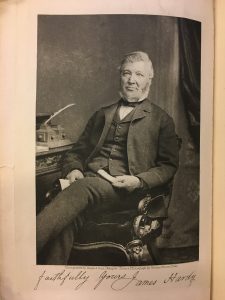 From here, the trail runs cold for a time, picking back up with James Hardy (1815-1898), a 19th century Scottish naturalist, author, and secretary to the Berwickshire Naturalist Club. Using a pastedown in the RBGE’s copy of a 15th century herbal, I was able to date the sale of Hardy’s library (and, thus, the Garden’s acquisition of this volume) to 1900. RBGE also retains a copy of a volume collecting the works of James Hardy, from which I have taken the portrait seen on the left. 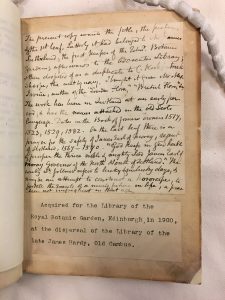 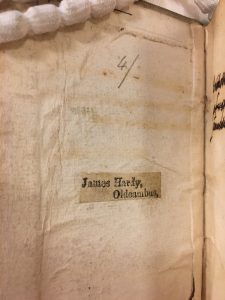 Unfortunately, for the moment, the period from its printing to its acquisition by the Palatina Library and the period from its probable sale in 1771 to its acquisition by James Hardy remain a mystery. The inscription on the flyleaf probably could have illuminated part of its trajectory, but it has been thoroughly redacted to the point of illegibility. 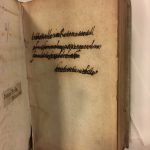 Possibly the blanks could be filled in by going through the catalogues and sale records of both the Biblioteca Palatina-Mediceo-Lotaringia, as well as those of the Biblioteca Nazionale Centrale Firenze and the personal papers of James Hardy. Until then, we can only guess as to the path this book took from Jean Jansson’s printer’s workshop in Amsterdam to the Medici library in Florence to a Scottish naturalist’s personal collection.

The Production and Reading of Music Sources