What’s the matter with Nardia?

The leafy liverwort genus Nardia has five species that are known to occur in Scotland. 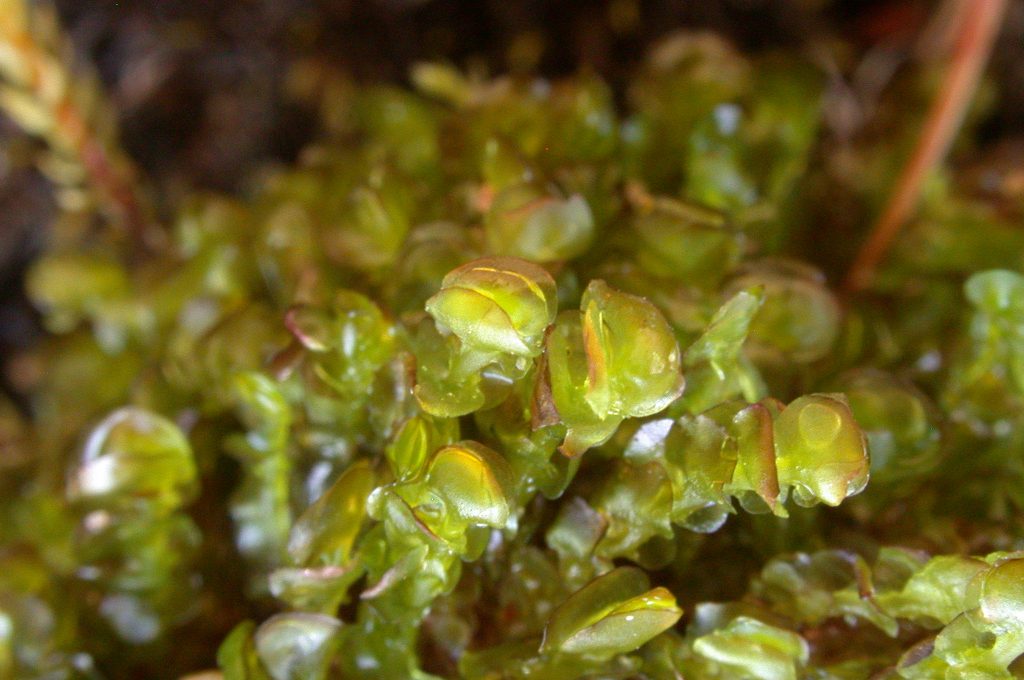 Nardia scalaris (Schrad.) Gray: “Usually on damp, acidic, mineral soil subject to disturbance, where it can form extensive, thin mats. Most common on banks by gravel tracks, in quarries and cuttings for forest roads, on fine scree and forming dense cushions in areas of late lying snow. It can also occur on river gravels and on rocks in similar places to N. compressa” (Gordon Rothero, p. 152);

Nardia geoscyphus (De Not.) Lindb.: “rather an unpredictable species, and is seldom present in abundance. It is most frequent on mildly base-rich soil banks in the uplands (for example on calcareous cliffs), but sometimes grows on damp, gravelly soil in disused quarries” (Gordon Rothero, p. 153);

Worldwide, there are an additional 21 accepted (and  six unresolved) species names in Tropicos.

The best DNA sequence sampling of the genus is in a phylogeny of the Jungermanniineae published by Shaw et al. (2015), which includes exemplars of the five species present in Scotland. Their study includes a total of 12 accessions of Nardia, comprising nine named species. Both of the species for which more than a single accession has been sampled, Nardia compressa (with accessions from Russia and Norway) and Nardia geoscyphus (with one accession from Russia and two from the US, one with no cited state location, the other, L1075, from Alaska), are not monophyletic, but are scattered polyphyletically throughout the genus.

This certainly serves as a very strong indication that there are issues with species identification and delimitation within Nardia!

So what’s the picture for Nardia using our bryophyte DNA barcoding data? This mostly focuses on accessions from the British Isles. We have sequence data for two accessions of Nardia geoscyphus, five of Nardia scalaris, and ten of Nardia compressa. We have also sequenced a Norwegian accession of Nardia insecta, and have been able to add three further ITS sequences from the NCBI database, GenBank, as well. Unfortunately we do not yet have any sequence data from Nardia breidleri. 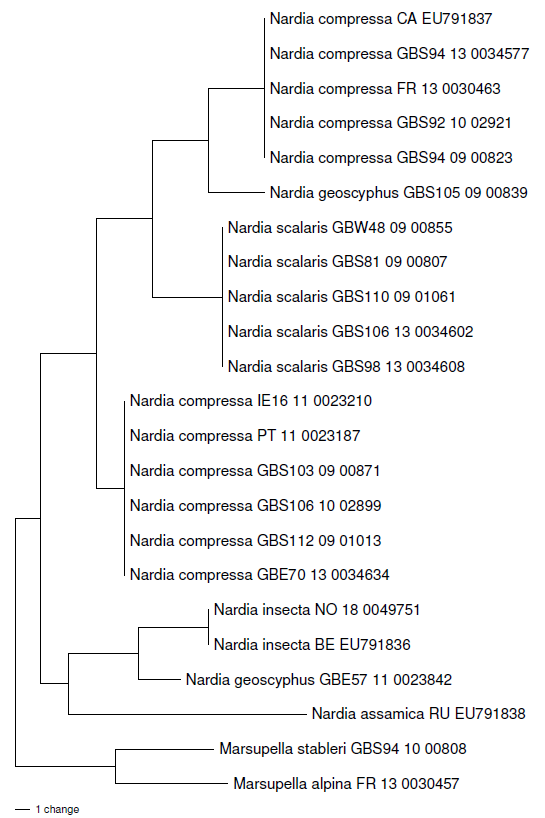 Maximum parsimony phylogram for Nardia, based on nr ITS sequence data, with country code and vice-county number following the species name, rooted on Marsupella

It’s clear that there’s more going on with Nardia than we currently recognise. Two of our commoner Nardia species require taxonomic revision, as they encompass more than one distinct entity – as things stand, we are overestimating the abundance of these species. If we can find morphological characters that we could use to distinguish them in the field and in the herbarium, we would gain a far clearer picture of their distributions and of their rarity.

Acknowledgements: some of the molecular work on this project has been done by Dr Michelle Hart, Ruth Hollands and Alex Clark. Dr Kristian Hassel from the NTNU University Museum in Trondheim has kindly sent us Norwegian samples of the two British red-listed species, Nardia breidleri and Nardia insecta.