Borneo lies at the heart of Southeast Asia, and has some of the most diverse equatorial rainforest in the world. However a considerable portion of this diversity remains hidden and undescribed, a situation which scientists at RBGE are working to put right. We have carried out two expeditions to underexplored parts of Kalimantan (Indonesian Borneo) over the past 12 months, and have made a number of discoveries. We visited two provinces, namely East Kalimantan to explore the limestone karsts there, and West Kalimantan to explore the mountains south of the border with Sarawak. 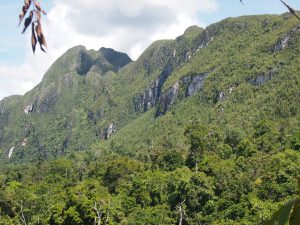 The stunningly beautiful Sankulirang Mangkalihat karst covers of 1000 square km in East Kalimantan. It is famous for having over 30 caves with prehistoric rock art dating back to 5,000 years ago. However it is less famous for its flora, an issue which a joint project between RBGE and LIPI (Herbarium Bogoriense and Kebun Raya Bogor) is highlighting. Our joint expedition to the limestone hills of the region in late 2016 yielded 7 Begonia species, one of which is a new record and the remaining 6 appear to be new species endemic to the karst system. 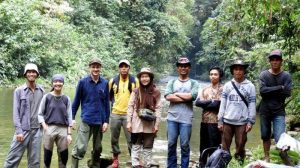 The West Kalimantan team, from RBGE, LIPI, and Forestry Faculty of Universitas Tanjungpura. 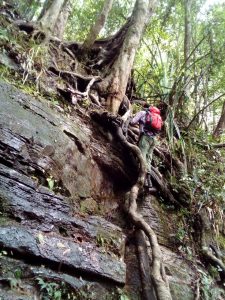 Begonias grow in the most awkward places, like this cliff on Gunung Bawang, West Kalimantan 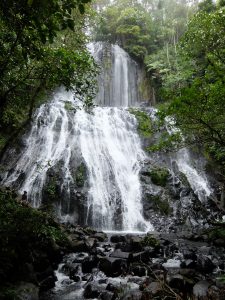 The mountains of Gunung Niut and Gunung Bawang in West Kalimantan harbour some of the best preserved forests in Borneo. Our joint RBGE and LIPI expeditions to these mountains in December 2017 yielded many new records and new species, and again show how much diversity is hidden in these remarkable forests.

We are now working on describing these species, and placing them in a phylogenetic and biogeographic context. All species will receive conservation assessments, and their discovery shows how important these areas are as refuges for Indonesian biodiversity.