Polygonatum verticillatum (also known as Whorled Solomon’s Seal) is a rare and endangered perennial plant of steep sided wooded gorges; now only found at nine locations in the UK, all of which lie within Tayside (Perthshire). Blending perfectly into its surroundings, P. verticillatum looks like something from the Jurassic period with its tall arching stems of vibrant green foliage that carry delicate white bell like flowers in late summer. 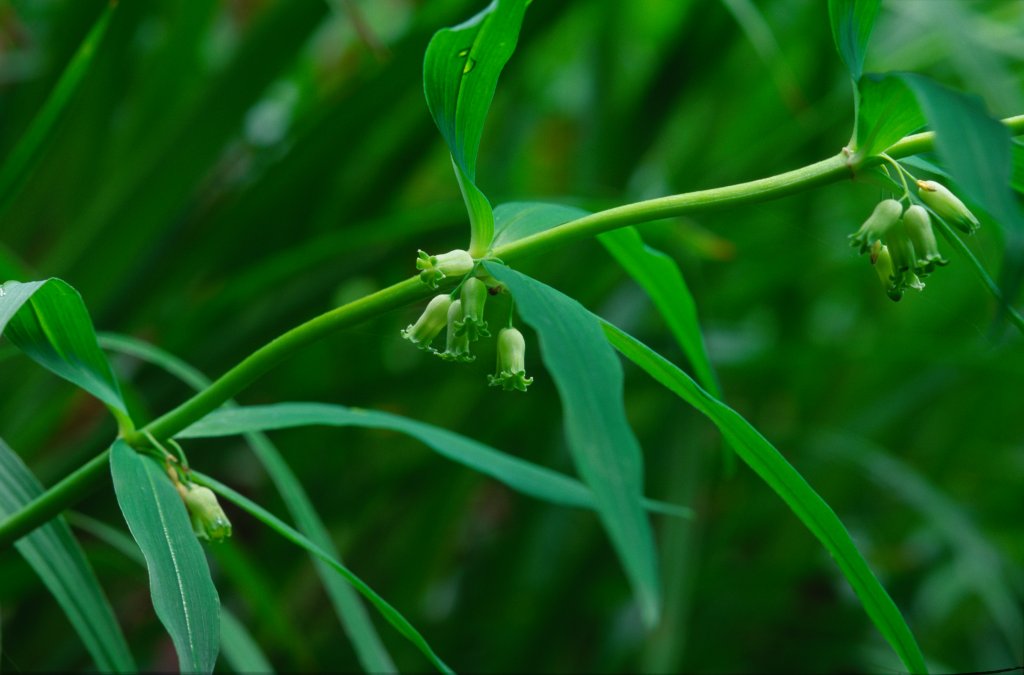 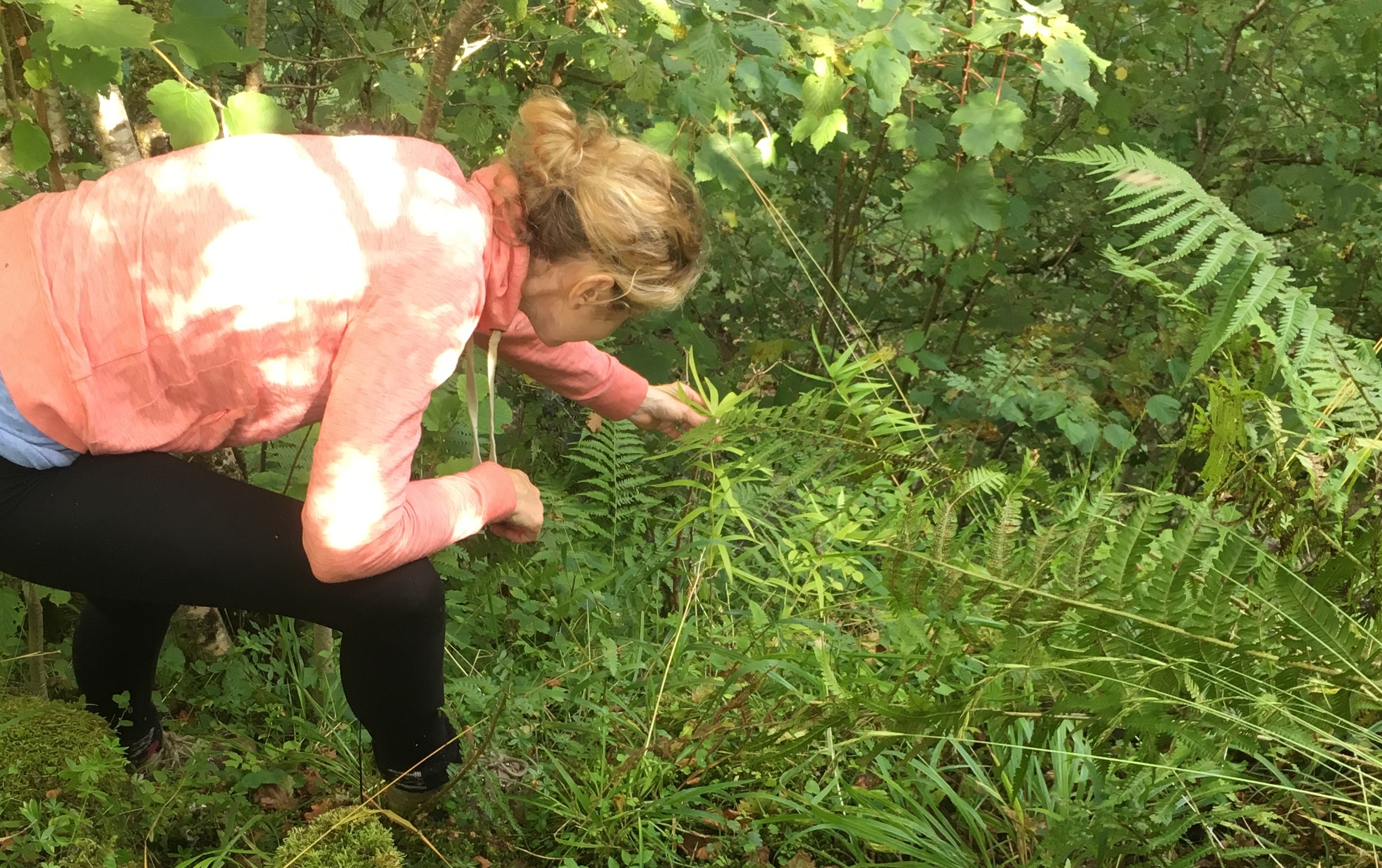 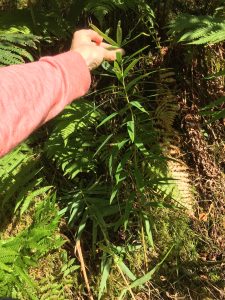 RBGE has been working in partnership with Scottish Natural Heritage on a project to try and rescue the species, as a survey of the remaining populations in 2016 found that many had suffered huge declines since the 1990’s (when extensive surveys were carried out by PhD student Jenny Wright). Climate change, causing heavy rainfall events (leading to landslips and erosion) as well as habitat fragmentation (leading to isolated, genetically depauperate, populations) are thought to have contributed to the declines, though the exact reasons are not yet fully understood. 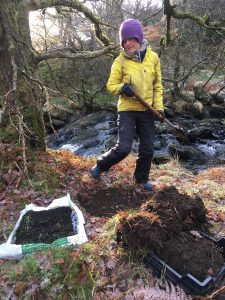 Luckily for the species, as part of an ex-situ conservation project, RBGE has held material from these precarious populations in its nurseries since the 1990’s, where horticulturist Natacha Frachon has been carefully tending to its needs. In a race against time to prevent this species from going extinct in the wild (while more work goes on behind the scenes to try and understand why the species is in decline), RBGE has been out in Perthshire this winter getting some of these plants back into the ground, where we hope they will help to bolster fragile populations.

The first site we visited was on the River Isla, where the original population has suffered a huge decline from over 2000 stems in the 1990’s to fewer than 200 today. Working with the support of the Airlie Estate, a team of six RBGE staff and volunteers set out on a very cold and foggy December morning. Arriving at the nearest access point to the wooded gorge, we began loading human trains with crates of plants, and set off across the fields to the gorge.

Several recently ploughed fields later (and six pairs of thoroughly mud-clad boots) we arrived at the woodland edge, and peered over the sheer sides into the rather ominous looking gorge. As expected, the sides of the gorge proved to be not only steep but also entirely slippery, leading to several precarious moments when we worried we might send the crates of plants skiing down the gorge sides into the river below. 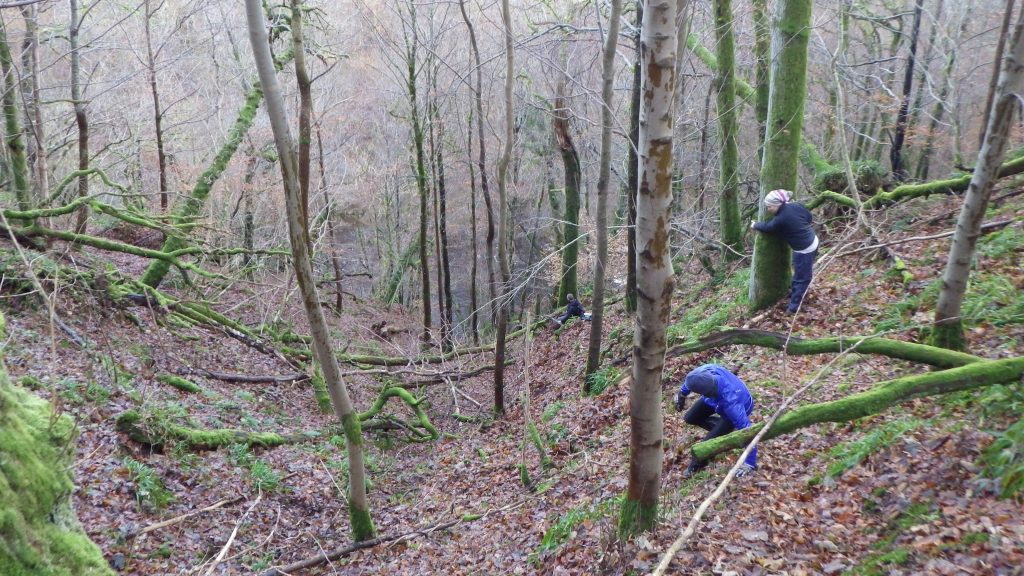 Thanks to the heroic efforts of the team, all five crates of plants were successfully transplanted into the gorge at locations which had been identified as giving the species the best chance of success.

The second site we visited was on a tributary of the Lunan Burn near Butterstone, where two populations have sadly declined from 25 and 91 plants in the 1990’s to just 1 and 6 respectively today.

With permission from Riechip Estate, two RBGE staff members set out on a beautiful crisp frosty morning with a car boot full of precious P. verticillatum. Upon turning off the main road, the small car struggled to make it up the icy track and there was concern that the planned 500m walk from the access point to the planting locations might turn into a rather more arduous 3.5km uphill trek! At last the little car slid to a halt at the access point and the team began transporting the four crates of plants to the planting sites in relay.

The work could probably have been completed in a couple of hours, however frequent stops had to be made to admire frozen waterfalls and beautiful hair ice sculptures.

Again, all four crates of plants were successfully transplanted into locations that were thought to be most suitable for the species.

All that awaits now is for us to cross our fingers and hope that our efforts pay off. In the summer we will re-visit the locations to check whether any stems have emerged from the material we transplanted, however it will take several years for us to determine whether the project has been successful and ultimately whether we have been able to prevent the extinction of this species from these locations. 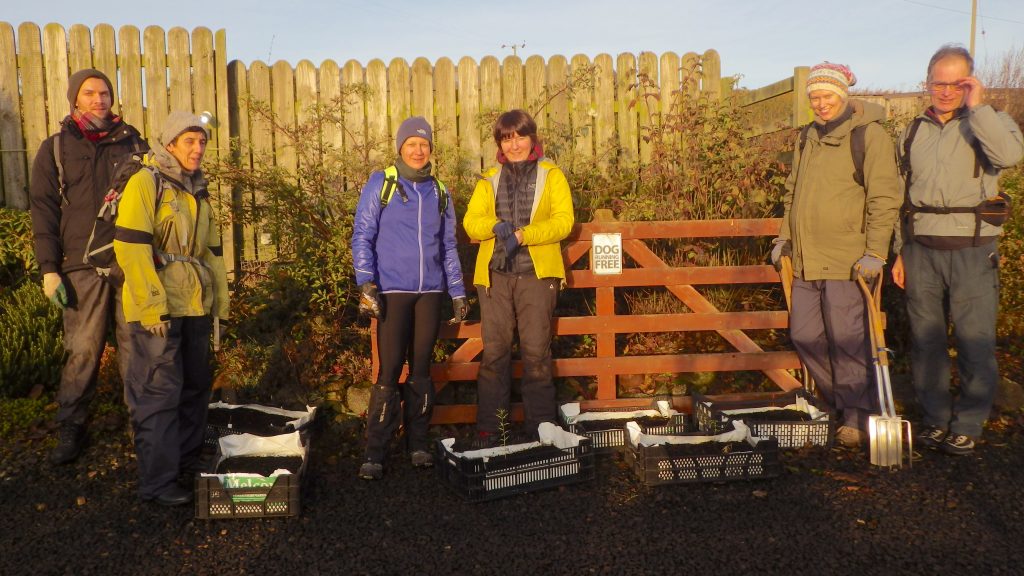 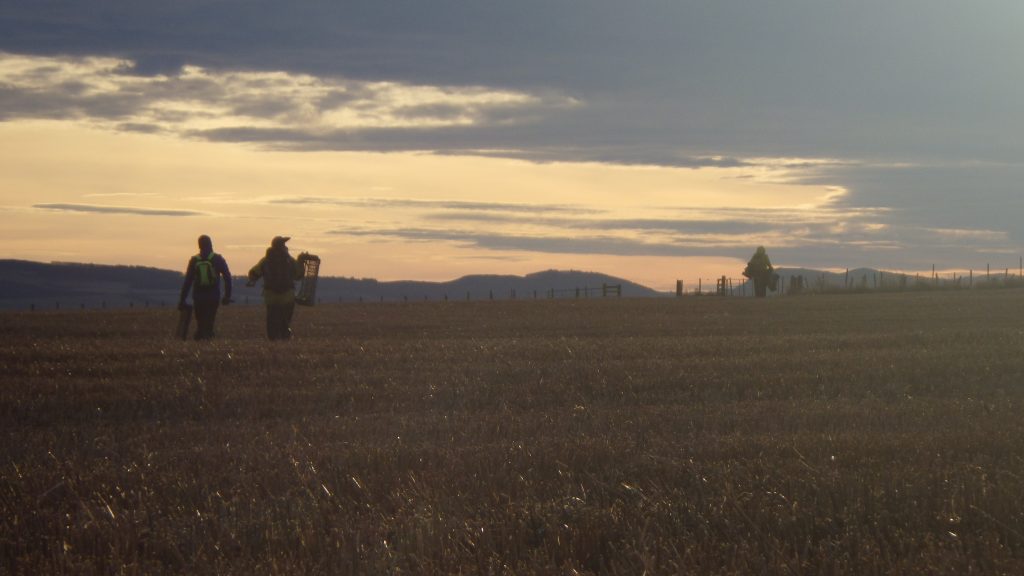 The end of a long day – heading back across the fields with empty crates and a feeling of satisfaction!