In April 2004, I flew north from Illinois to met up with a botanical friend, Dr Zoe Badcock. Our meeting point was Vancouver, British Columbia; from there we took the ferry over to Vancouver Island, and drove up to Tofino for a few days’ holiday. It’s a spectacular location – hot springs, long windswept beaches, and, of course, the Atlantic rainforest filled with wonderful bryophytes.

As a rather inexperienced bryologist looking for liverworts, mostly what I saw was Pellia… however, there were a few more exciting gems. One was a species of Aneura, growing around a stream outlet onto the beach – but the most memorable for me was Gyrothyra underwoodiana. The specimen itself is not particularly stunning, although it does voucher several DNA sequences on GenBank, which we included in our 2006 phylogeny of liverworts. 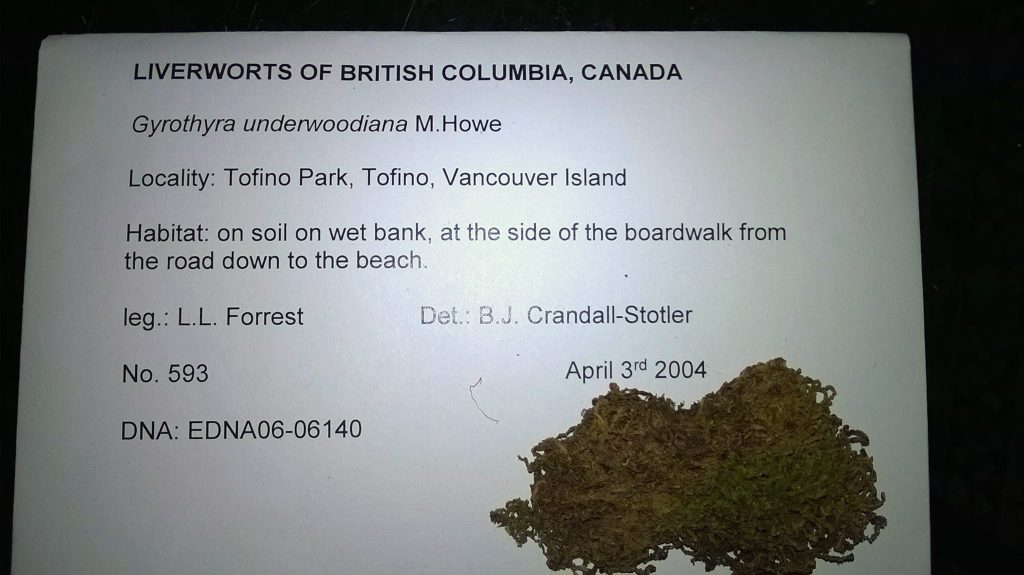 I didn’t know what it was at the time I made the collection, though. I just picked up a piece as it was a such beautiful shade of pale green, luminous in the woody scrubland near the beach. 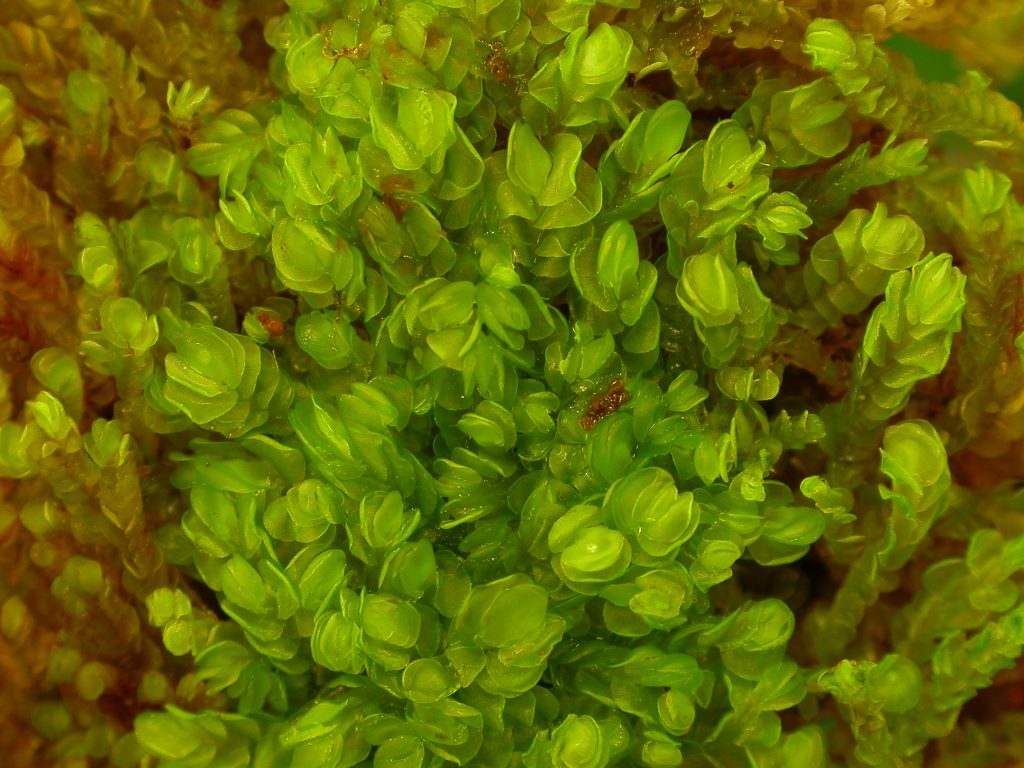 However, when I took it back to Southern Illinois University, Prof. Barbara Crandall-Stotler recognised it immediately – she’d published a paper about its sporophyte anatomy and development back in 1976. Amazingly, the piece I’d picked up had some immature sporophytes. A few days after getting back to Illinois, these were fully extended, and dehisced under the warm lights of the binocular microscope.

It becomes strikingly obvious where the name Gyrothyra comes from, watching the spiral-curled sporophytes spring open to release their spores. Luckily for those of you who have not had the excitement of watching this happen yourselves, fellow postdoc Dr Zhang Li was on hand, with far better camera skills than me, and at least managed to capture before- and after-dehiscence shots of the sporophytes. 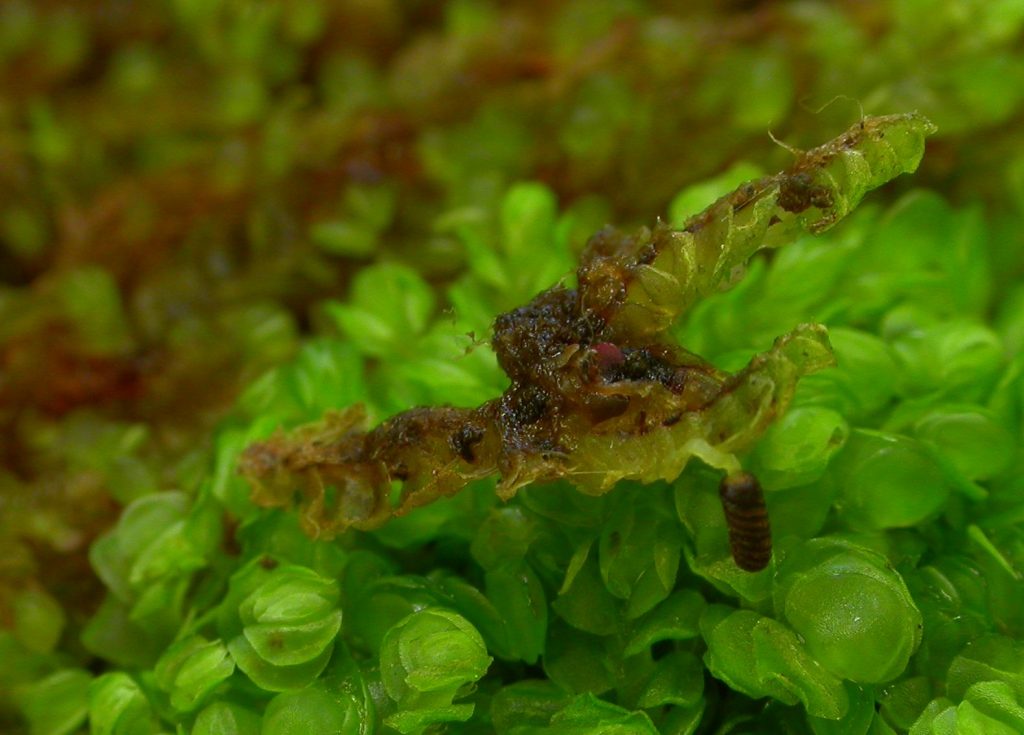 Underside of a patch of Gyrothyra underwoodiana, photographed by Li Zhang, with an undehisced mature capsule showing at the bottom right of the image 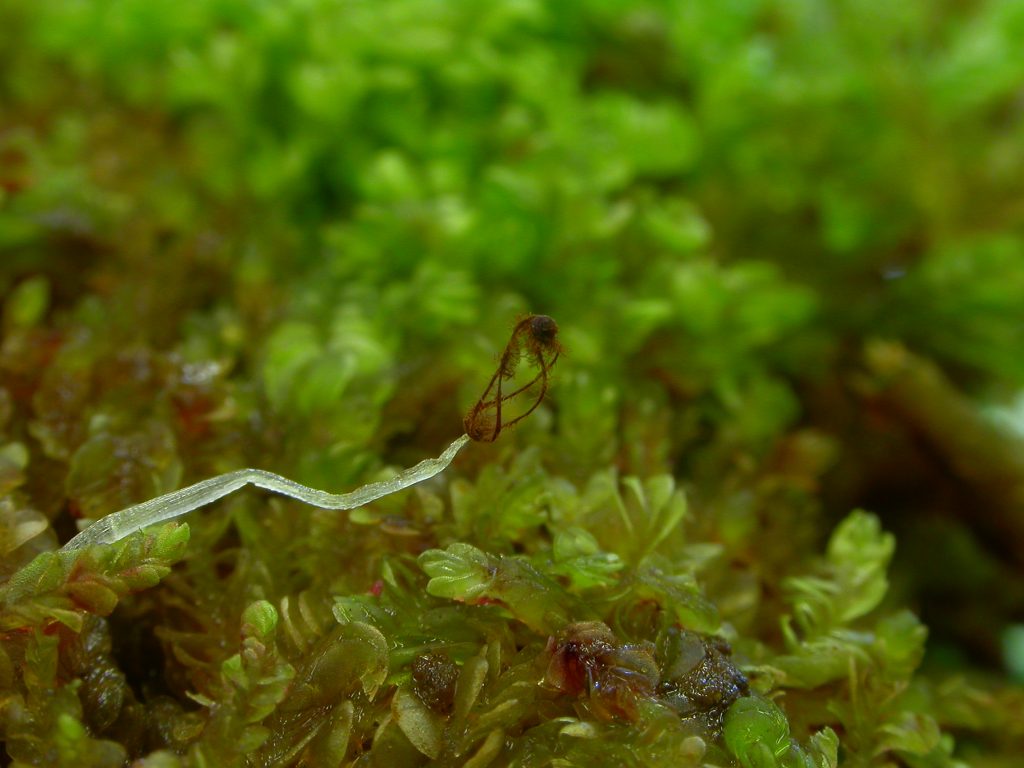 Crandall-Stotler, Barbara J. 1976. Anatomy and development of the sporophyte of Gyrothyra underwoodiana Howe. Journal of the Hattori Botanical Laboratory 40: 355–369