January 1st 2017 arrived with a light overnight frost and bright sunshine. The mild weather continued and with it the fragrance from the open flowers of Sarcococca, Hamamelis and Viburnum species and cultivars overpowered gardens especially at dawn.

Then a change, with the full moon the snow and freezing temperatures arrived. This was not to disrupt Edinburgh as much as the rest of the country; indeed by the 15th the sun was bright enough to provide sufficient warmth to sheltered corners of the garden and the yellow buds of the Winter Aconites opened. 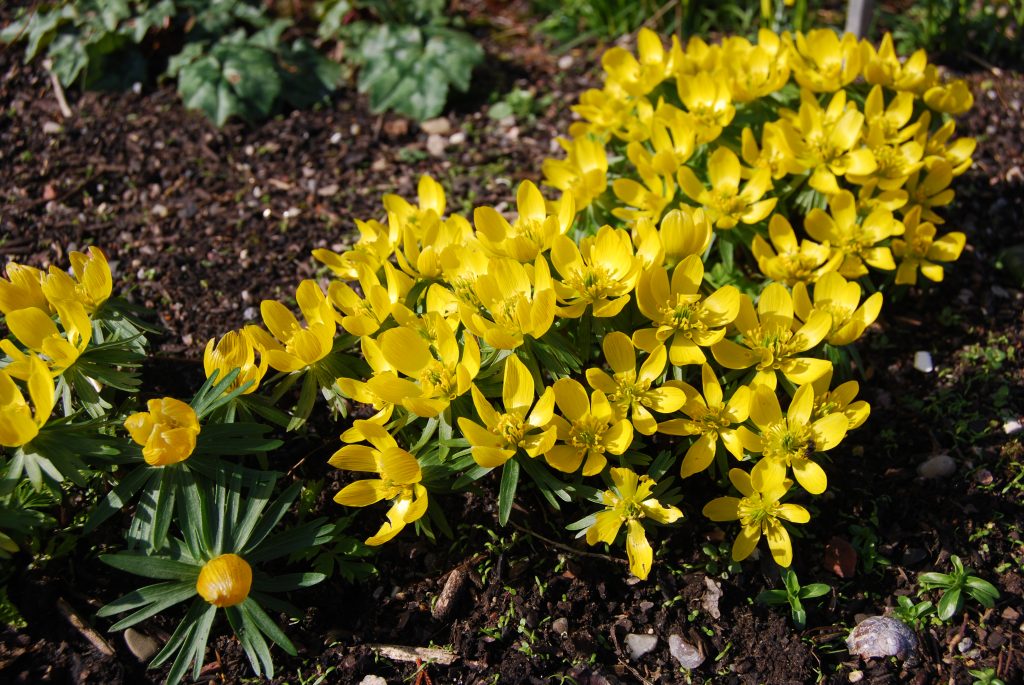 December 2016 into January 2017 was a dry and relatively warm winter; the leaf collection through the Garden went well. February became wetter with a lack of sunshine. However we had a burst of unexpected warmth in the second part of the month with a high of 13.9℃.

Storm Doris dropped a “weather bomb” on the country during the early morning of 24th February. Edinburgh remained an isolated area that experienced heavy rain, 13mm in total, yet was not affected by any of the travel and other snow and storm related disruption many other areas suffered. The snow that blew through from the west landed on the Pentland Hills which glistened in the following days early morning sun. With the sun came a gentle rise in temperature and visible evidence of buds swelling to burst open.

A rise in temperature around the middle of March warmed the soil and encouraged bird song well into the hours of evening dusk. The buds on the mature Magnolia kobus were at bursting point, shedding the velvety sheaths that gave the protection from winter extremes.

A prolonged dry spell at the end of March into the first third of April with a maximum temperature of 17.6℃ on the 8th April and a minimum of 5.9℃ again provided optimal conditions for prolonged flowering of the gardens’ spring flora. The Amelanchier species were especially showy through this time period.

A snap frost of less than 2 degrees caused widespread damage to new shoots and flowers on the morning of the 18th April. Gunnera foliage and the red tips of the Pieris and Hydrangea shoots were all burnt black.

October 2016 to March 2017 was the driest six month period since 1995. April followed with Edinburgh recording a total of 4.0mm of rain throughout the whole month. We were recorded as the driest area in Britain. Grass growth on the lawns was stunted and yellowing, not the lush growth expected from a Scottish spring. Usually I would expect this poor growth to occur in August. Such an early soil moisture deficit is unknown. A change around from the flood warnings we are now conditioned to expect. 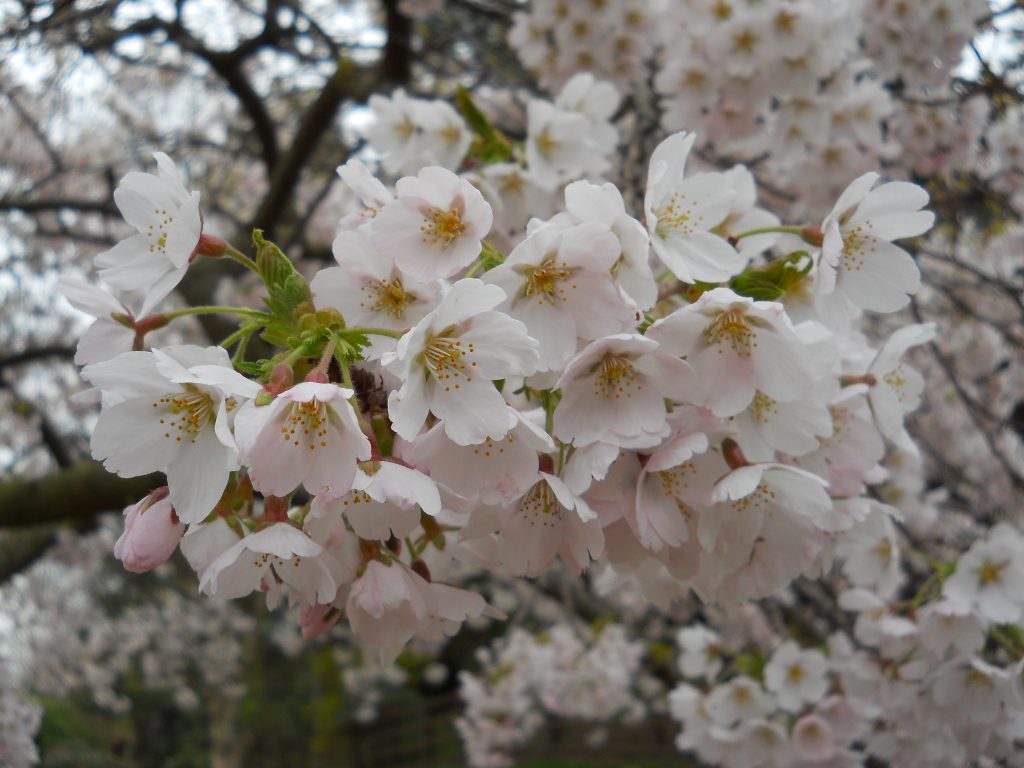 The bonus of this prolonged high pressure was the quality and duration of blossom; Prunus then Malus trees retaining flowers and lasting longer than in previous seasons. We then had a seamless transition with Rhododendron and Camellia followed by the perfume of the Lilacs and then Wisteria. Colour was noticeably better and more prolific in the tree and shrub canopy this spring than previous years.

On May 7th the first warning of dry weather affecting the growth of rain dependant field crops was in the press. By this date our lawns were showing increased signs of stress. Many areas had browned and growth was slow and sporadic through the lawns. Many lawns were running to flowering and seeding stage at the expense of leafy vegetative growth. On the 15th May heavy downpours, a total of 3.6mm of rain fell in 24 hours. Just about the equivalent amount that we had throughout April. “Good for the garden” as we say.

The Bearded Iris cultivars had their moment of glory this year, flopping out onto the grass from the border. The flower heads and colour were as good as a warmer sunnier climate would regularly produce. No doubt having a sunny May was a major influence. The soil moisture levels had an unexpected boost with rain falling continually from the evening of June 5th all day on the 6th and into the night, resulting in a total just shy of 50mm of rainfall during this period and a very wet Garden.

By midsummer the Cardiocrinum’s had finished flowering and were on their way to producing the seed pods that make such an impression in the winter months. This Midsummer Day was also the hottest June day since 1976 in England; here we had a temperature easier to live with. The longest day ended with a thunderstorm directly over the city with, in the humid still air, the rain falling vertically. It does illustrate the excessive heat and also the sudden heavy downpours that are becoming a feature of our lives. The torrential downpours and prolonged episodes of rain all added up to 180mm resulting in the wettest June recorded.

Following on from this wet month growth on the woody plants and the lawns was phenomenal this year. Travelling through the city, hedge cutting started earlier this year than in previous years.

August started with the monsoon rain and buffeting wind lowering temperatures. It became the wettest August for some areas in many years. It also broke the trend of the previous eight months which had been warmer than average, August being cooler than the average. It did not harm the fruit harvest which for both soft and top fruit was good. 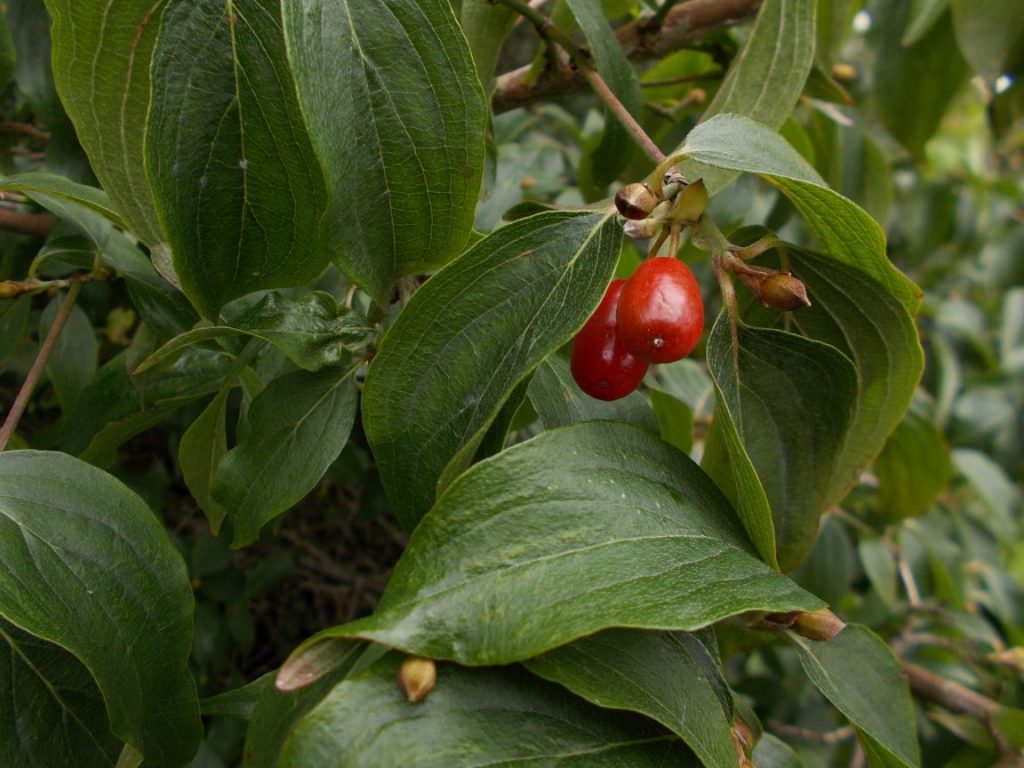 The fruit harvest arrived early in September; apples were picked early by 2 to 3 weeks. The berries on the “Cornelian Cherry”, Cornus mas and Viburnum rhytidophyllum were prolific. We were welcomed back to work following the mid-September holiday weekend with a grass frost. 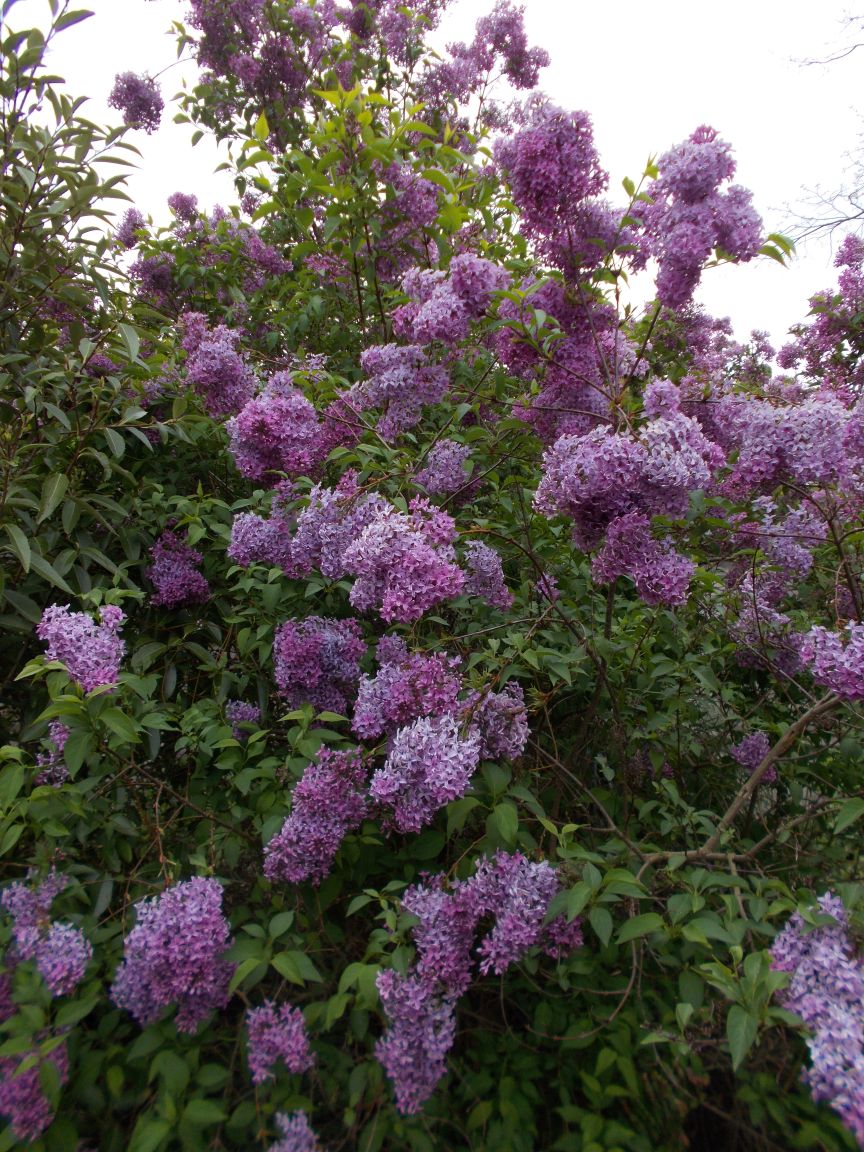 The first blow of the autumn caused the Garden to close on the 2nd October. Yet looking around in this first week of the month the grass had a lush green spring freshness to it. The apples trained in the demonstration garden had out of season flower trusses open to pollinating insects. This end of this growing season has seen a range of plants producing flowers outwith their normal flowering pattern. Rhododendron, Malus, the herbaceous Geraniums gained a flowering season with the mild autumn, temperatures reaching 20.6℃ on the13th October. 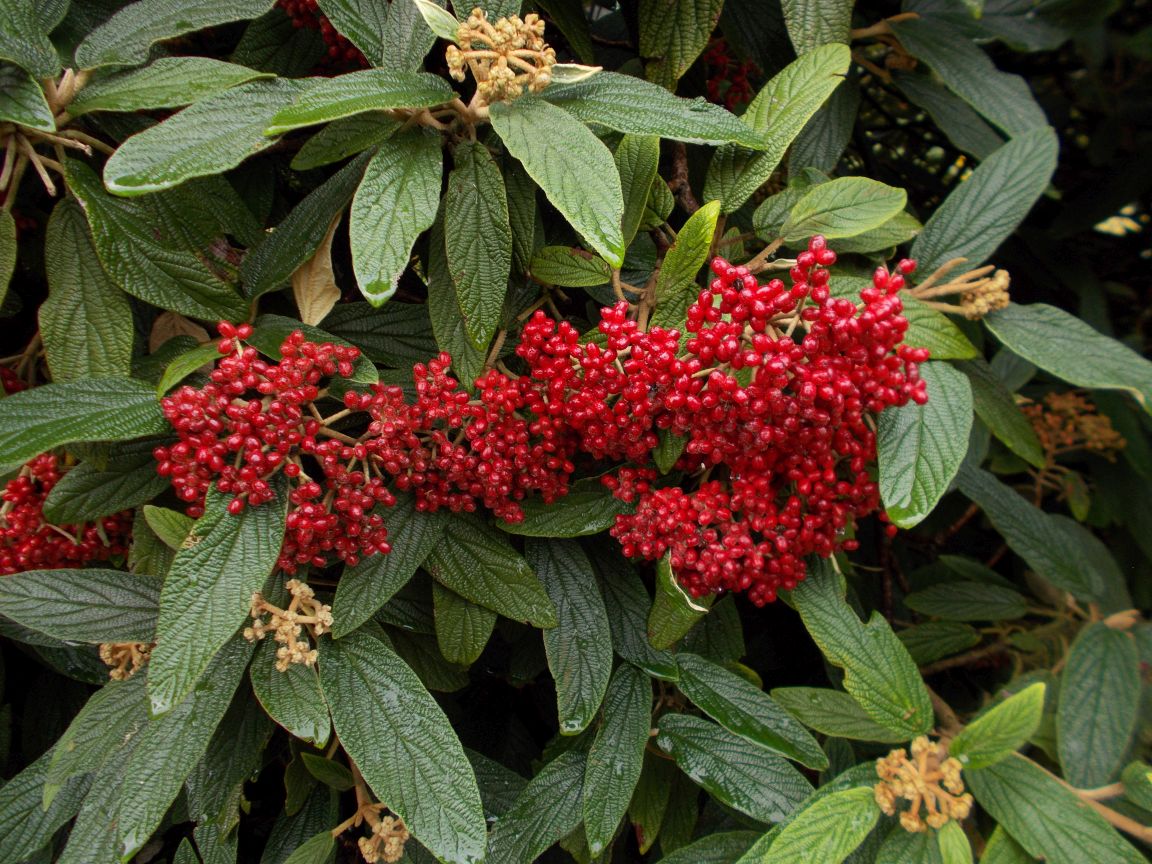 The forecast Atlantic storms had blown themselves out by the time they reached the east of Scotland. The day we were prepared for storm Ophelia was dark. The sky overcast and laden, it did not seem to lighten up at all. All this before the clocks changed.

The temperature dropped dramatically overnight on the 26th October giving a touch of white frost the following morning. This may have helped the development of the autumn colour, as yet, a poor season for colour through the deciduous canopy. The foliage remaining green into November and then being blown off the branches by high winds and stormy rain.

Following on from the coldest night, overnight of the 5th/6th November, the chlorophyll turned to reveal the start of better autumn colours in the trees yet still not enough to make it a memorable season for colour.

A succession of days of below zero temperatures in December led to moisture in the soil freezing as it had not done for the duration of last winter. These frost filled days and nights were foliage flopping and colour draining (the racemes on Mahonia lost their entire sharp yellow colour). Interestingly with the desiccating effect of the frost on the foliage of a Chilean native, Lobelia polyphylla, the overpowering smell of musty dry grass was evident when in the vicinity of this plant. Also, we hoped this cold snap of 6 days duration resulting in a low of -12.4℃ with the grass minimum not rising above -4.5℃ at midday has the ability to kill disease spreading organisms. Boxing Day saw enough snow covering Arthurs Seat to make a decent snowman. Bright sunshine during the day and frosty nights followed.

As the year drew to a close, looking at the monthly maximum temperatures, for each month of 2017 the temperature reached into double figures, with the months of May to October, each recording in the 20℃’s. Is our climate warming? Records at RBGE show it is; by 1℃ over my working lifetime. Not a great deal but changes to the global movement of organisms have led to a range of new pests, diseases and exotic visitors to our shores that have the potential to devastate our garden and native flora. It is now a case of remembering; “All footwear, tools, equipment and, if required, clothing should be cleaned thoroughly before leaving and entering another garden or undertaking fieldwork in the wider natural environment both in the UK and worldwide.”

Best wishes for 2018, keep your garden soil in good health and choose appropriate days to work in harmony with the prevailing weather conditions.