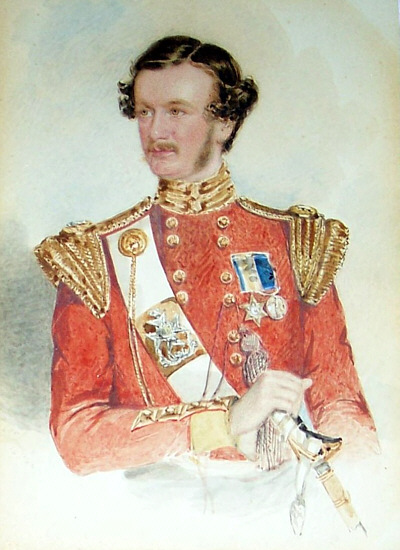 Scattered throughout the herbarium cabinets of Gramineae at Edinburgh are many sheets from the herbarium of the distinguished soldier and agrostologist William Munro, bearing a printed label ‘from the Herbarium of the late Gen. Wm. Munro, C.B., April 1890’. The sheets are unfortunately usually rather tatty around the edges, as Munro used larger mounting paper than fit comfortably into the Edinburgh cupboards. Commonly the sheets bear more than one collection, often from widely scattered localities and different collectors. Because Munro’s expertise on grasses was widely respected, he received duplicates from many distinguished collections, and as an example may be taken a sheet of what is now called Danthonia cumminsii, which bears collections made by Joseph Hooker from two different localities in Sikkim in 1849 (E00257803, E00394336).

Munro’s early military career was spent in India, where he undertook botanical work in Bangalore and the Nilgiri Hills, then around Agra, followed by distinguished service in the Crimean War, and later commanding his regiment (the 39th Regiment of Foot) in Canada. Details of Munro’s biography have been written up by Jeremy Archer, and may be seen on the website of The Keep Military Museum, Dorchester, where a portrait of the handsome soldier is kept and also his medals. In India Munro corresponded with Robert Wight, and when working on Wight I had occasion to look at the volume of Munro’s correspondence that, with others of his manuscripts, is in the archives of RBG Kew. One of the letters includes an amusing tease from Wight about the difficulties of deciphering the 20-year old Munro’s handwriting:

Let me have as many and as long letters as ever you please but with one proviso that you write a somewhat more legible hand. I was nearly an hour spelling your letter yesterday and after all could only make guesses at a great part of it. I am aware that I am naturally a bad deciferer [sic] of indifferent M.S.S. and generally patiently submit to my unhappy lot, but on the present occasion I called in the aid of Mrs. W. who has rather a happy knack in that way, and posed as I was she was naturally much more so. One instance occurs to my memory you want a work on Indian Gramineae which was translated after much exertion of eyesight into Indian ham but the remaining half of the word remained in obscurity, and it was not until lyper was converted into Cyperaceae that association of ideas cleared away the obscurity by converting h into Gr. that the former could be made out.-

More serious, however, is a note at the beginning of this volume of bound letters, written by William Botting Hemsley, then the Assistant Curator of the Kew herbarium, to which Munro had bequeathed his collection. This explains how and where the herbarium was distributed in 1890, ten years after Munro’s death, and why Edinburgh has such an interesting set:

This information seems not to be widely known, so it seems worth publishing this note. It resulted from an email enquiry from Austin Brown in Australia, who was trying to trace Tasmanian specimens collected by Ronald Gunn, some of which ended up in Munro’s herbarium. The Munro herbarium is this now scattered between CAL, E, GH and W.