History of the cultivar 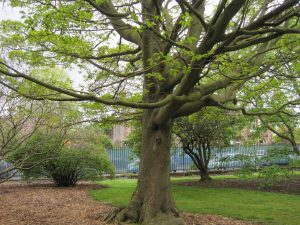 This cultivar was described in 1959 by James Keenan, a former member of staff at the Botanics. He described this cultivated form of A. davidii as having an open habit with internodes of up to 10cm; leaves of up to 18cm by 13 cm.

Keenan stated that three Forrest number were associated with this form, although does not list them, as he also stated that they have become confused in cultivation. However all three numbers were from Forrest’s 1921-22 expedition, distributed by and financed almost entirely by Reginald Cory.

In the same article in Baileya Keenan also described another cultivated form  Acer davidii ‘Ernest Wilson’. Although these two forms are described as cultivars if it had been done today, they would most likely have been described as geographic variants based on distinct populations within the range of Acer davidii in China.

The Plant at the Botanics 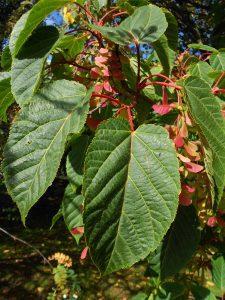 At the Botanics there is currently a single mature specimen of Acer davidii ‘George Forrest’ with the accession number 19230015, with the Forrest Collection number 22327, growing near the southern boundary of the garden, to the west of the woodland garden.

The original card record for this name cites two plants growing one of Forrest 22327 and another of 21337. The card records also note the donation that gave rise to these plants from a donation record 15:23 [in the Herbaceous Department donation book], noted next to both these number is the annotation “was A. forrestii”. Our more recent card records only cites Forrest’s 22327, the other number having died in 1965.

Maple’s of the World van Gelderen et al. (1994) stated that Acer davidii ‘George Forrest’ at Westonbirt was incorrectly labelled as A. forrestii under Forrest number 22239.

In the 8th edition of Bean’s Trees and Shrubs this is further expanded:

This Forrest introduction is also represented at Kew and Westonbirt, and is sometimes seen in collections under the label “A. forrestii”. The confusion apparently arose through seeds and plants of this form having been distributed in error under the field number F. 22239, which properly belongs to an introduction of the true A. forrestii.

The wild voucher specimen collected for Forrest 22239 does confirm that it Acer forrestii and going back to the Forrest’s typed collection notes held in the herbarium at RBGE; Forrest’s 22327 turns out to be the Type collection Aconitum duclouxii var. ecalcaratum.  So our record clearly is in error with the number 222327, it was most likely a transcription error when the card index was moved to the digital database; 22239 becoming 22327 by swapping a 2 and 3 around in the middle of the number and misreading the last digit as a 7 not a 9.

This still doesn’t answer the question of why they were distributed under a Forrest number that from the voucher specimen is Acer forrestii.

The donations books are a wealth of information, as well as provenance information, in terms of wild origin, they also contain information regarding who was sending material, from their own gardens and collections or forwarding on material as Cory was from George Forrest.  The entries are also further  annotated for example with if the seed did not germinate and a date, or the date the plant died if it had made it to the garden; as well as later identifications often initialled and dated by who was working on the plant.

Reginald Cory forwarded on multiple sending’s of seed from George, a case of not putting all your eggs in one basket.  We also received Forrest seed from Forrest himself, from L.J. Williams who was forwarding on seed he had received from  Cory and the both Isaac Bayley Balfour and William Wright Smith authorised removal of seed from from herbarium specimens.

However and more intriguingly at the end of seed lists in both the 4th and 5th sendings were a number of seed batches without collection numbers. Both lists contained the entry “Acer sp. ?davidii forma Dokar La” – could this have been the source for Acer davidii ‘George Forrest’?

I suppose it is possible that the lack of collection number at this stage caused some scrambling around at some point in the past and that lead to an incorrect number being assigned, simply so the plant had one. 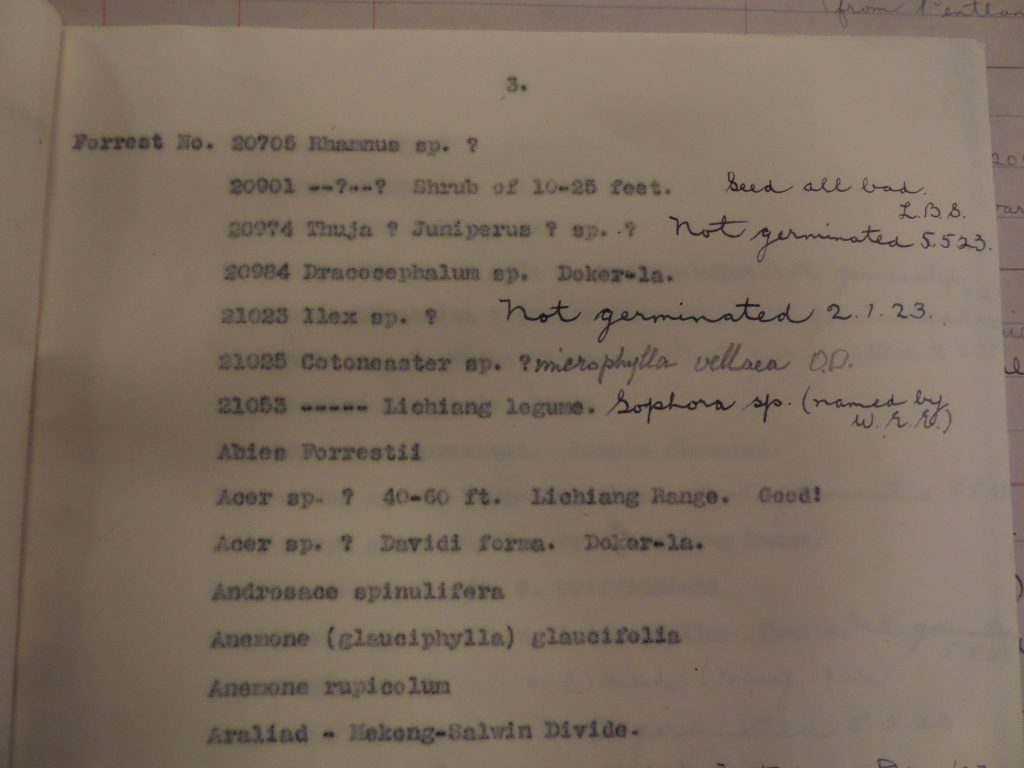 While the Forrest numbers previously associated with this plant have been discounted. There is still mystery surrounding the origin of the Acer davidii ‘George Forrest’. The only located records of germinated Acer davidii from the 1921-22 expedition being F.19732 A. davidii var. horizontale and the unnumbered Dokar la forma.

It could be that seeds were removed from one of the six Acer davidii preserved specimens in fruit from the 1921-22 expedition in the herbarium and that is recorded somewhere, lurking in the darker recesses of Plant Records, but that will have to wait for another day.