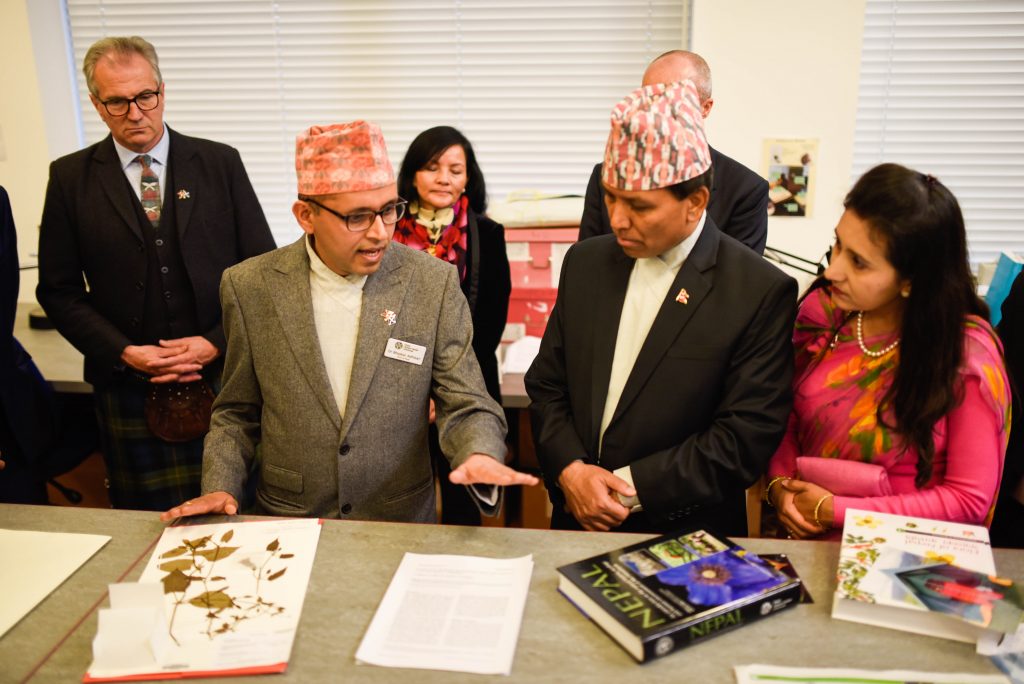 His Excellency Dr Durga Bahadur Subedi, Nepalese Ambassador to the United Kingdom, led a delegation from the Embassy in London to Scotland this weekend, visiting Edinburgh, Aberdeen and Glasgow. As part of this grand tour we were delighted to welcome him to the Botanics on Monday, where the remnants of Hurricane Ophelia temporarily relented to allow us to go ahead with an outdoor programme inaugurating our Nepalese area. Dr Subedi was accompanied by his wife, Mrs Poonam R. Subedi, two distinguished visitors from Nepal, Prof. Shankar Thapa (Tribhuvan University) and Mr Indra Prasad Bhandari, Embassy staff and their families.

A short video of his visit is available on the RBGE’s YouTube channel, both in English and Nepali. 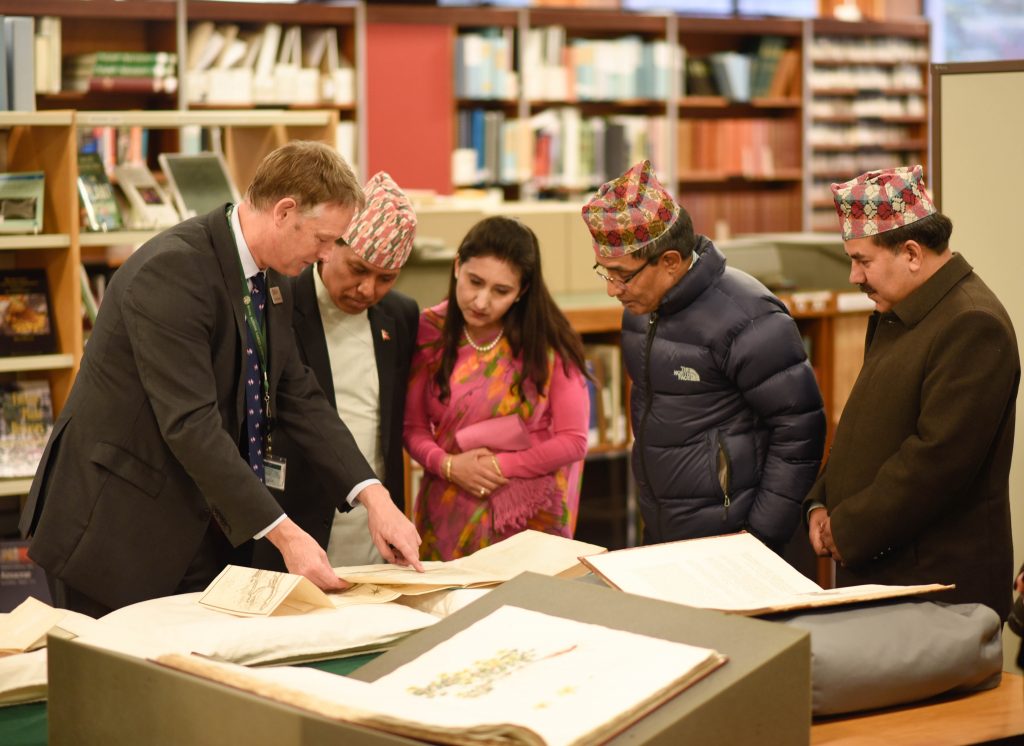 RBGE is very proud of its long connection with Nepal, dating back to 1802 when Dr Francis Buchanan-Hamilton made the first scientific collections of plants from the Kathmandu Valley. Known as the Father of Nepalese Botany, the more than 1000 species he recorded during his year in Nepal set the foundation for the scientific study of plants in this Himalayan country. Buchanan-Hamilton was taught botany by John Hope at RBGE, then at the Leith Walk site, in what is now the Professor’s Room at our Botanic Cottage. Dr Subedi was shown Buchanan-Hamilton’s memorial plaque, restored and resited in pride of place at our Reception, before looking at his original, hand-written notes held in our Archives, and his 215-year-old plant specimens preserved in our Herbarium.

The Ambassador was pleased to use our high-resolution camera to take a digital image of a Buchanan-Hamilton herbarium specimen of Bauhinia vahlii, collected in the Morang Hills of eastern Nepal on 6 May 1810. This now joins the growing number of Nepalese specimens in our virtual herbarium, which are freely available to researchers in Nepal and around the world. Dr Subedi knows this plant from his home town in Jhapa, where it is still called Bhorla, the Nepali local name Buchanan-Hamilton recorded in his notes, and which he used to create the provisional name, ‘Bauhinia bhorla’, written on the field ticket. 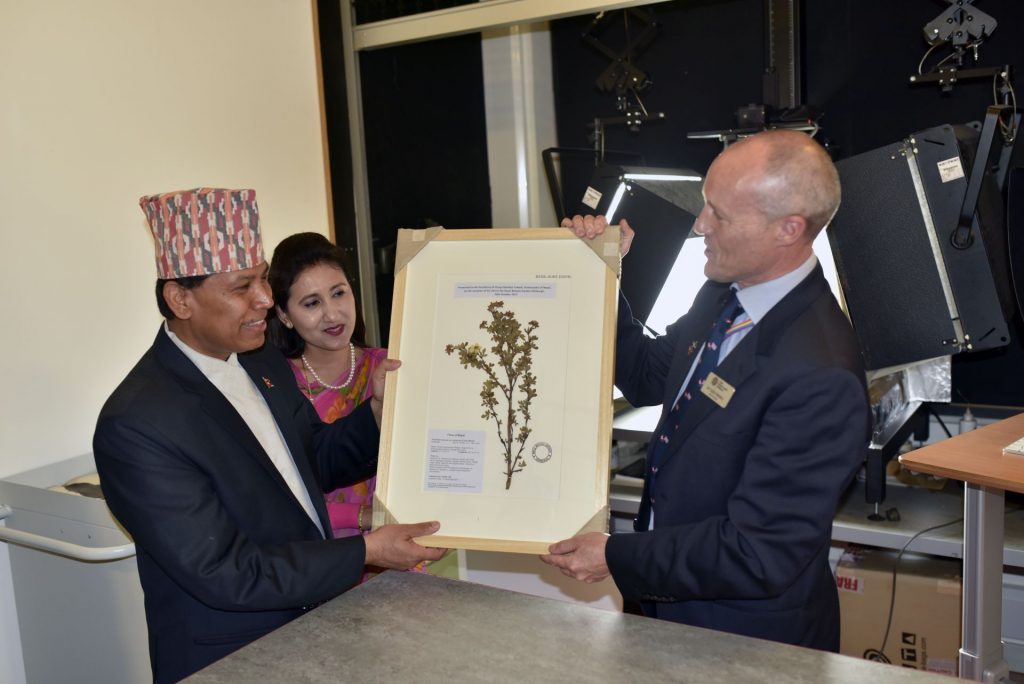 Seeds sown from the Bicentenary Expedition to Nepal last September are growing well in our nursery, and are being used to increase the diversity of plants in our expanding Nepalese area at Inverleith and three regional gardens. This display of Nepalese plants highlights the importance of Nepal to the work of RBGE and raises awareness of Nepal, its globally important biodiversity, cultural heritage, and stunning scenery. The Ambassador inaugurated this area, uncovering a copper plaque commemorating the event, made in Nepal with the characteristic outline of a pagoda temple. 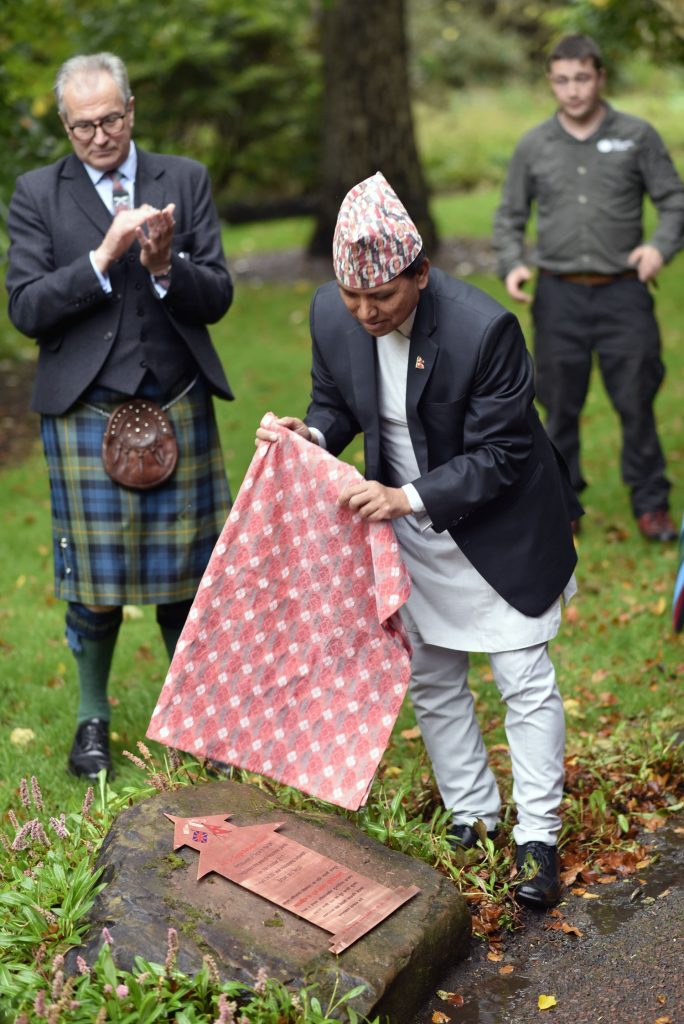 Dr Subedi and the Regius Keeper planted a sapling of Sorbus vestita, to the stirring sounds of bagpipes played by a Gurkha piper. The genus Sorbus, whitebeams and rowans, is found both in Scotland and Nepal, and so this large, spectacular tree, collected last year from the Langtang region of central Nepal, symbolises both the close connection between our two countries and people, and the bicentenary of diplomatic relations.

Keith Glass has been involved with plantings in the Nepalese area, here steadying the sapling

At the end of his visit Dr Subedi made the profound observation that “the strong botanical link between Nepal and Scotland goes beyond plants – it represents connections between our societies, our governments and our countries.” 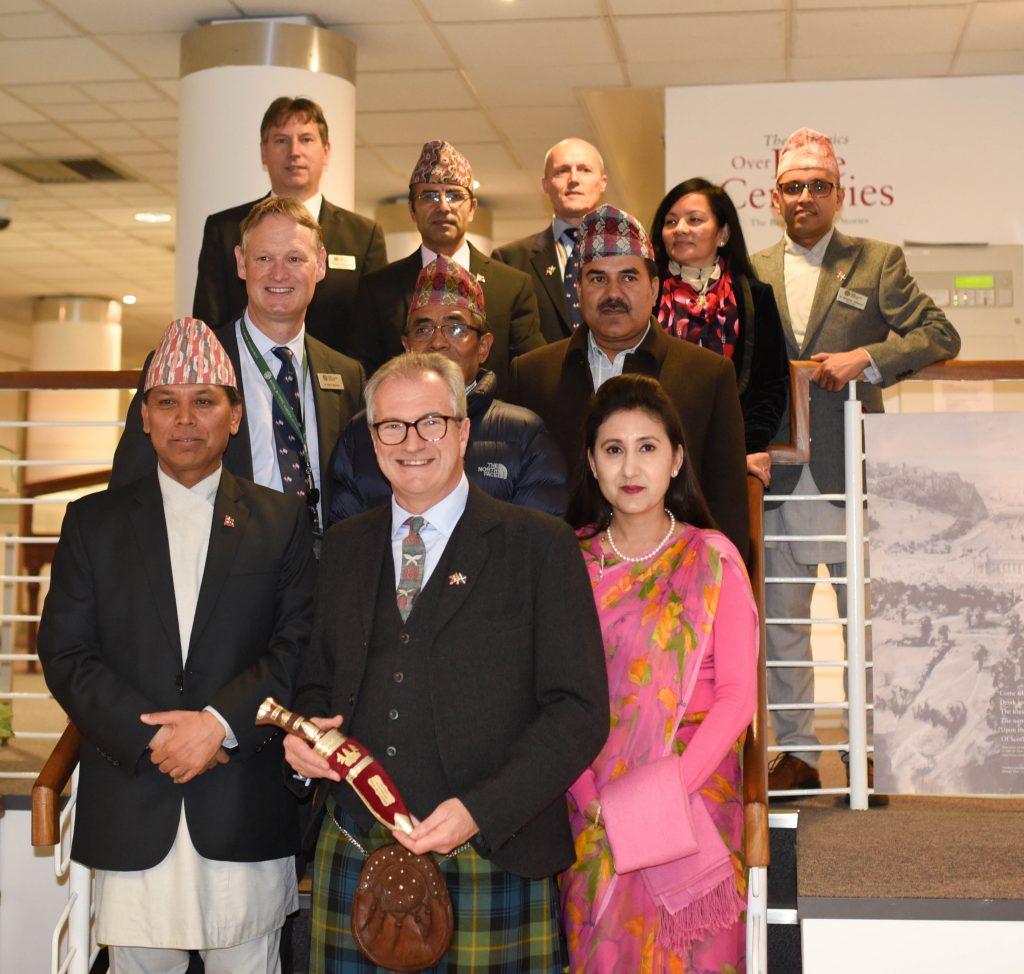 This story was quickly covered by the Nepalese press, in the Nepali newspaper Kantipur, and in English in NepalBritain.com.