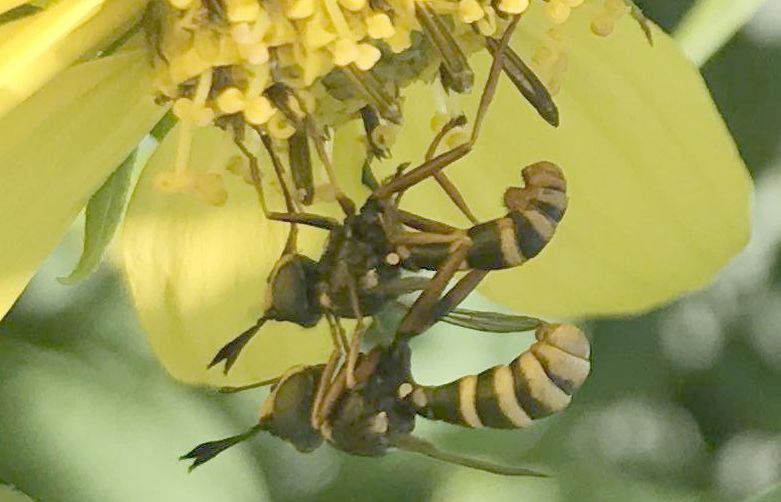 August 2017 was another mixed month in Edinburgh weather-wise, with plenty of rain but also some warm sun. Daytime temperatures were mostly slightly warmer than average, but night-time minima were mostly cooler than the average.  The Garden’s wildlife list increased by four, from 903 to 907. They were a caddis-fly (only the second recorded at the Garden), two moths, and a dance fly that has actually been seen on many occasions but had eluded identification until now.

Birds Thirty-five bird species were recorded at RBGE Edinburgh in August. This was one less than July’s total but the species list was almost identical. After what appears to have been a good breeding season on the Water of Leith, Kingfishers were seen on six occasions, with both male and female birds present at least twice. House Martin and Willow Warbler were both recorded on 20th – the former a fairly typical late summer visitor to RBGE where it is most often recorded then, the latter somewhat unusual and perhaps a returning autumn passage migrant. There were a further five records of Swallow and three of Swift, making 2017 an exceptionally good year for records of those summer visitors at the Garden. Some other species proved hard to find in August, however, e.g. Long-tailed Tit and Song Thrush (both only two records). The complete list of 35 species recorded during August 2017 was: Blackbird, Blackcap, Black-headed Gull, Blue Tit, Bullfinch, Carrion Crow, Chaffinch, Chiffchaff, Coal Tit, Dunnock, Feral Pigeon, Goldcrest, Goldfinch, Great Spotted Woodpecker, Great Tit, Greenfinch, Grey Heron, Herring Gull, House Martin, Kingfisher, Lesser Black-backed Gull, Long-tailed Tit, Magpie, Mallard, Moorhen, Robin, Song Thrush, Sparrowhawk, Stock Dove, Swallow, Swift, Tawny Owl, Tree Creeper, Willow Warbler, Wood Pigeon, Wren.

Mammals and amphibians: Foxes were seen on four days occasions and the onset of autumn was marked by the seasonal appearance towards the end of the month of soil disturbed by Badgers searching for grubs, something that has become a regular and somewhat unwelcome feature of the Garden from autumn through to spring. Common Frogs were recorded on five different dates. 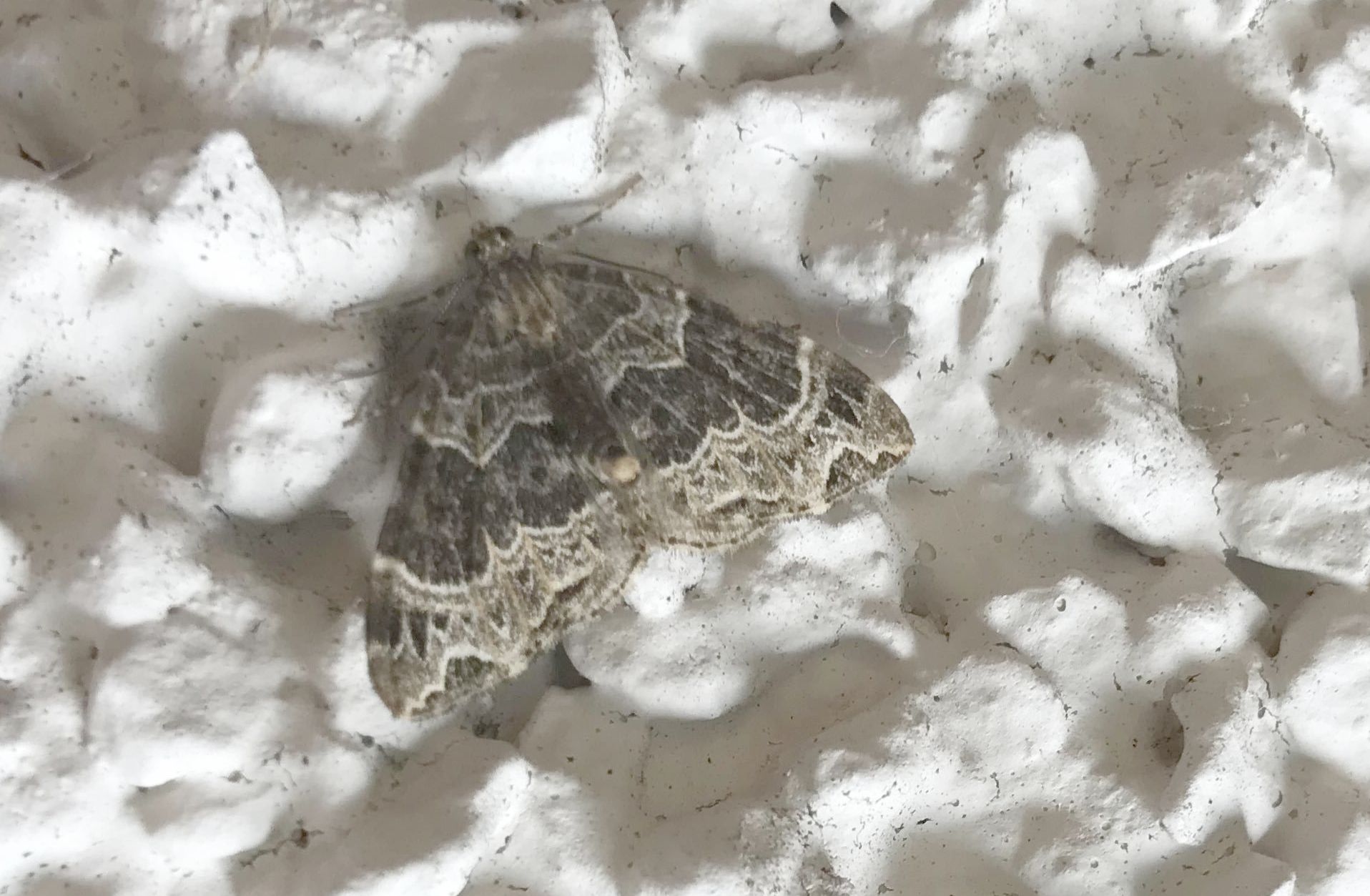 Insects and other invertebrates: August was the best month so far this year for butterflies at the Edinburgh Garden. Seven species were recorded: Small White (10 dates), Green-veined White (6 dates), Large White (11th), Speckled Wood (15th, by two different observers in different Garden areas), Painted Lady (17th and 30th), Peacock (21st and 31st) and Red Admiral (31st). Among the eighteen different moth species recorded (some by day, others during a trapping session on the night of 24th/25th) were a Small Phoenix (14th) which was a new Garden record, four species of Underwing, three Rustics (Common Rustic on 14th, Flounced Rustic and Marbled Rustic both on 25th), Dun-bar (12th and 25th) and Barred Red (17th, 18th and 22nd). Several leaf-mining moths were also identified from their mines; one of these, Stigmella ulmivora (on elm Ulmus glabra) was another of the month’s new Garden records. The caddis-fly Athripsodes albifrons was recorded during moth trapping on 25th; as well as being a new Garden record, it was only the second caddis species to be recorded at the Garden. The mix of bee species was similar to July’s although Tree Bumblebee was not seen during August. The last record of Wool Carder Bee was on 24th in the Fruit Garden, on the Stachys edging there; the following week, the few remaining flowers on those plants had been removed by Garden staff; thus, it is possible that no further records of this species will be made this year, as their favoured plants on the Rock Garden (house-leeks) have also now finished flowering. Field Digger Wasps continued to be recorded until 24th. The parasitic wasp Amblyteles armatorius was seen on 30th. Two oak galls, both caused by gall-wasps, were seen: one was the Oak Spangle Gall, recorded practically every year, while the other was the Knopper Gall, which this year has, on two different oak trees in the Garden, caused almost every acorn calyx on those trees to become grossly deformed and swollen, with very few acorns developing normally. Eight hoverfly species were seen, the most frequently recorded being Banded Hoverfly on ten dates and Striped Hoverfly (also called the Footballer) on five. In stark contrast to previous Augusts when Marmalade Hoverflies were everywhere, sometimes with several competing for a single flower, August 2017 was a dire month for that species, with only two being seen (2nd and 12th). Xylota sylvarum was seen on 15th and the typically late species Dead Head Hoverfly and Tapered Drone-fly were both first recorded on 17th and were seen till the month’s end. Other fly records included a pair of Conops quadrifasciatus (17th), the crane-fly Tipula confusa on 3rd, 29th and 31st, greenbottles on numerous dates and the re-appearance of bluebottles Calliphora vicina (from 29th). The dance-fly Tachypeza nubila, a new Garden record, was finally identified in August (29th) after being photographed on birch trunks on many previous occasions; the date of the actual first record will be difficult to determine. Forest Shield-bug and Common Flower Bug continued to be seen, while Common Pond Skater was recorded in Inverleith House pond (23rd and 31st). Ladybird records included Orange Ladybird (2nd), Two-spot (five dates) and Seven-spot (seven), while other beetle records included two more records of Vine Weevil (21st and 22nd), Common Pollen Beetle (31st), Red Soldier Beetle (up till 14th) and two green weevils Polydrusus formosus (29th) and Phyllobius maculicornis (31st). Once again, no barkflies or springtails were recorded in August. The harvestman Leiobunum rotundum was seen on a further seven dates between 1st and 24th at the back of the herbarium building, with four present there on 15th. Six gall-mites were identified from their galls on different trees and shrubs while the mines of 16 different leaf-mining flies were recorded in August, five of them for the first time in 2017. 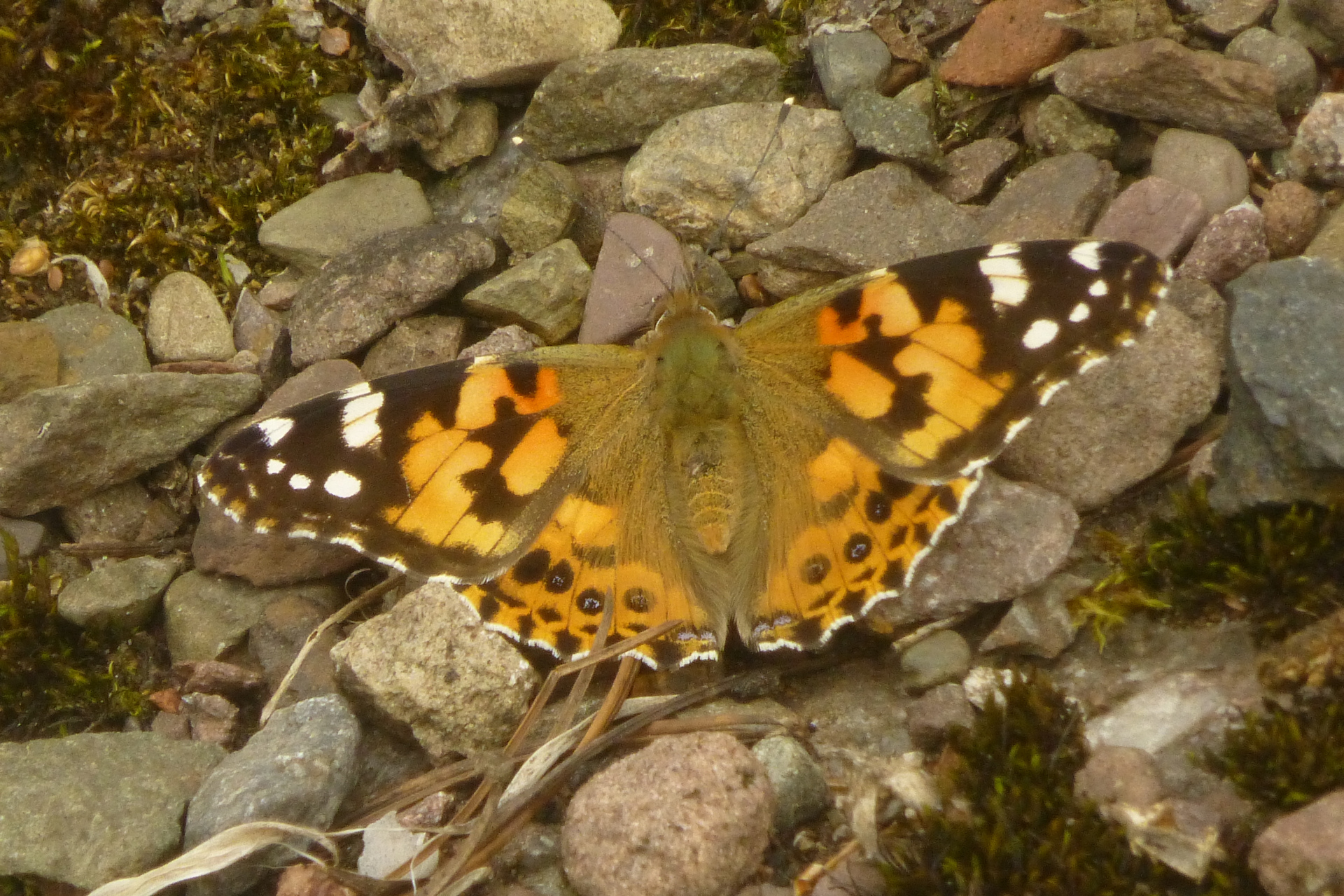