Some of the visitors to the Botanic Cottage may be aware that on the roof of the east wing there are solar photovoltaic panels installed. Through the generation of electricity these contribute, along with the solar thermal panels on the west wing, to the production of hot water and heating for the Cottage. It was our aspiration from the outset of the project to make the building as sustainable as possible, however due to the fact that it was originally built in the 18th century, this was a significant challenge! The renewable technology incorporated was 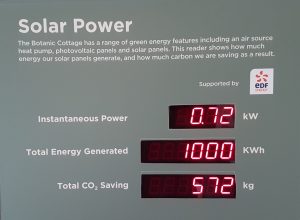 one way to reduce our carbon footprint and also provide a demonstration facility to show what can be achieved in a relatively small building. Although we’ve had a pretty damp spring and summer we’re delighted to announce this week that since the Cottage was opened, these panels have produced 1 Megawatt of electricity saving over 570kg of CO²! This not only offsets our carbon footprint and saves money but also helps us as a publicly funded organisation, to support Scotland’s transformation to a low carbon economy. Here’s to future generations!