Happy Birthday India: or, the changing names of a Himalayan sumach 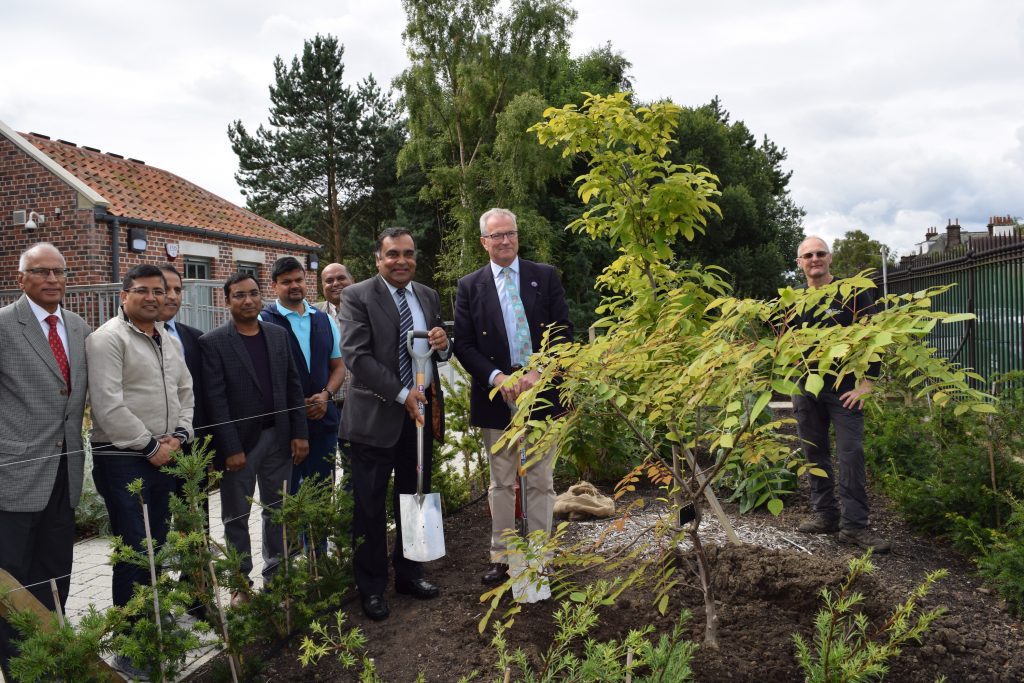 How to choose a tree suitable for a High Commissioner of India to plant to commemorate the 70th anniversary of Independence while on a visit to RBGE? Trees, of course, do not confine themselves to political boundaries. Their distributions came about long before men drew lines on maps (a result of mutation, adaptation, dispersal and tectonic shifts interacting with local environmental factors including soil and climate) – and their example might well be taken to heart in matters of diplomacy – to encourage the idea that nations might be better off in forging alliances, rather than emphasising differences. The species chosen should, however, include India within its distribution. And as the tree was to be planted beside the recently translocated Botanic Cottage, in which John Hope lectured to William Roxburgh and Francis Buchanan-Hamilton, pioneers in the exploration of the Indian flora, it would also be good if it could illustrate an aspect of RBGE’s 250-year links with the Subcontinent. Arboriculturist Will Hinchliffe came up with the suggestion of a plant under his care labelled Rhus javanica var. roxburghii, which, from its name, would certainly tick the second box. It is a sumach, an attractive, small tree, with pinnate leaves and good autumn colour. But first it was necessary to check if this name for the plant was correct, and that it occurs in India.

Taxonomy and botanical nomenclature are intricate subjects: an interaction of science, history and opinion, subject to a code of byzantine ‘laws’ that have to be applied retrospectively. One of the problematic issues to arise is that the modern concept of the ‘type’ must be applied to a single specimen or illustration of whatever original material was quoted when a species was first described – a process known as ‘typification’. In fact, early botanical authors rarely cited a single element, but would commonly base a new species on a range of vaguely specified specimens, often with additional references to plants considered to belong to the same species as described in earlier literature. In many cases, with latter-day broadening temporal and geographical scope to research, the ‘original material’ is often found to include several different species, and the ‘type’ has to be narrowed down to one that best fits the description, with the other ‘discordant’ elements reassigned as appropriate.

Will’s tree had been collected as seed on an RBGE expedition to Taiwan, where the field identification as Rhus javanica var. roxburghii had been made. This followed the treatment in a book on the collections of Ernest Wilson by the Harvard botanist Charles Sprague Sargent, and subsequently used in what was once called Formosa for a tree with an unwinged leaf midrib (‘rachis’). However, this name and the correctness of its application to the plants raised at RBGE had not subsequently been checked by a taxonomist.

As part of a project to ‘typify’ all the Linnaean names, it turned out that what Linnaeus intended when he described Rhus javanica in 1753 was a plant from Java, collected by his student Pehr Osbeck. This is no longer considered to be a Rhus and is now placed in another genus of the same family (Anacardiaceae), as Brucea javanica. Curiously there is a link here both with Hope and Roxburgh, as this genus was created for a plant, the ‘wooginoos’, Brucea antidysenterica, discovered by James Bruce of Kinnaird in Abyssinia, while he was seeking the source of the Nile, and where it was used as a cure for dysentery. Hope was the Bruce family physician, and Bruce gave him seeds of several of his discoveries to grow in the Leith Walk Garden. These included the wooginoos, which also reached the Calcutta Botanic Garden in Roxburgh’s era.

The Taiwan plant has a wide distribution from North-West India, through the Himalayas, to China, but had first been described by Philip Miller, in the 1768 edition of his Gardeners’ Dictionary, as Rhus chinensis, which is therefore the plant’s correct name. At the Chelsea Physic Garden Miller grew specimens from an unknown source, but he also quoted an early description from the works of Leonard Plukenet, so the plant must have been known in Britain by the late 17th or very early 18th century. Historically its leaf galls were exported from China and Japan for use in tanning and dyeing, for making ink, and medicinally. In 1784 it was redescribed by J.A. Murray under a different name, Rhus semialata, based on plants cultivated in Gottingen from seed sent from Macao in 1781. But where does that leave ‘var. roxburghii’?

Following nomenclatural trails is a form of detective work, in which the guiding concept is called ‘priority’: working backwards to find the earliest published name – always bearing in mind the rules of nomenclature, which may deem certain names not to have been ‘validly published’, or to be ‘illegitimate’ (validly published, but breaking one or more rule). The hierarchical level or ‘rank’ at which a name is published is also important, and if a name has been published as a variety, the epithet used doesn’t necessarily have to be retained if it is later upgraded to the rank of a species. In this case the epithet roxburghii was first published in 1825 by Augustin Pyramus de Candolle as a variety of Rhus semialata, which he was entitled to do, while at the same time recognising that the plant had already been described as a species. In fact this plant, characterised by an unwinged leaf rachis, had been described twice previously: once earlier the same year in David Don’s pioneering Flora of Nepal as Rhus amela. For this Don (who was brought up in Botanic Cottage, where his father George was for a time RBGE Superintendent) quoted specimens collected at Narainhetty by Hope’s student Francis Buchanan-Hamilton, but Don also quoted a name coined by Roxburgh in his Hortus Bengalensis. The latter was Rhus bucki-amelam, but as with many other names in this catalogue of the Calcutta Botanic Garden it did not count as ‘validly’ published, because there was no description or reference to a published description or illustration – Don was therefore entitled to give it a new species name. Roxburgh hesitated to publish his great Flora of India project before its scrutiny by European authorities, and the part with his validating description of R. bucki-amelam did not come out until 1832, by which time it was superfluous to Don’s name at species level, and in the meanwhile De Candolle had given it a name at varietal rank to commemorate Roxburgh’s role in the plant’s recognition.

William Roxburgh was the first salaried superintendent of the Calcutta Botanic Garden, and under his stewardship the number of species grown there rose from 350 to 3500 – as revealed in the Hortus Bengalensis. In this Roxburgh gave sources for this huge influx of new plants – from as far afield as Philadelphia and Sumatra. The Rhus is found to have been one of the earliest accessions to reach Calcutta from Nepal (predating Buchanan’s productive visit of 1802/3), having been sent by the ‘King of Nepal’ in 1798, the epithet bucki-amelam coined for the plant’s local name in Nepal.

The question of ‘opinion’ is raised when deciding how to treat the variability that plants may exhibit over their ecological or geographical range, and whether or not to recognise this taxonomically by means of names (at whatever rank): in this case the significance of the character of the degree of winged-ness of the rachis. In Rehder’s view (still used in the 2008 Flora of China treatment) in var. chinensis the rachis is winged; in var. roxburghii it is wingless. However, this variation seems to be more or less continuous. In the RBGE herbarium are many specimens from China and India, and the majority of the Indian ones have no, or narrow, wings, similar to the collection from Taiwan.

In India the tree occurs at altitudes of 1–2000 metres in the Himalaya, in the States of Jammu & Kashmir, Himachal Pradesh, Uttarakhand, West Bengal, Sikkim, Arunachal Pradesh, Meghalaya, Nagaland and Manipur. In these it is known by many different local names, one of which is tatri. From the (edible) pulp around its seeds a wax can be extracted, and it can be used medicinally against colic.

This tree was, indeed, an appropriate specimen for the Indian High Commissioner to plant when he visited RBGE on 6 August.