Stanhopea ruckeri – back from the dead 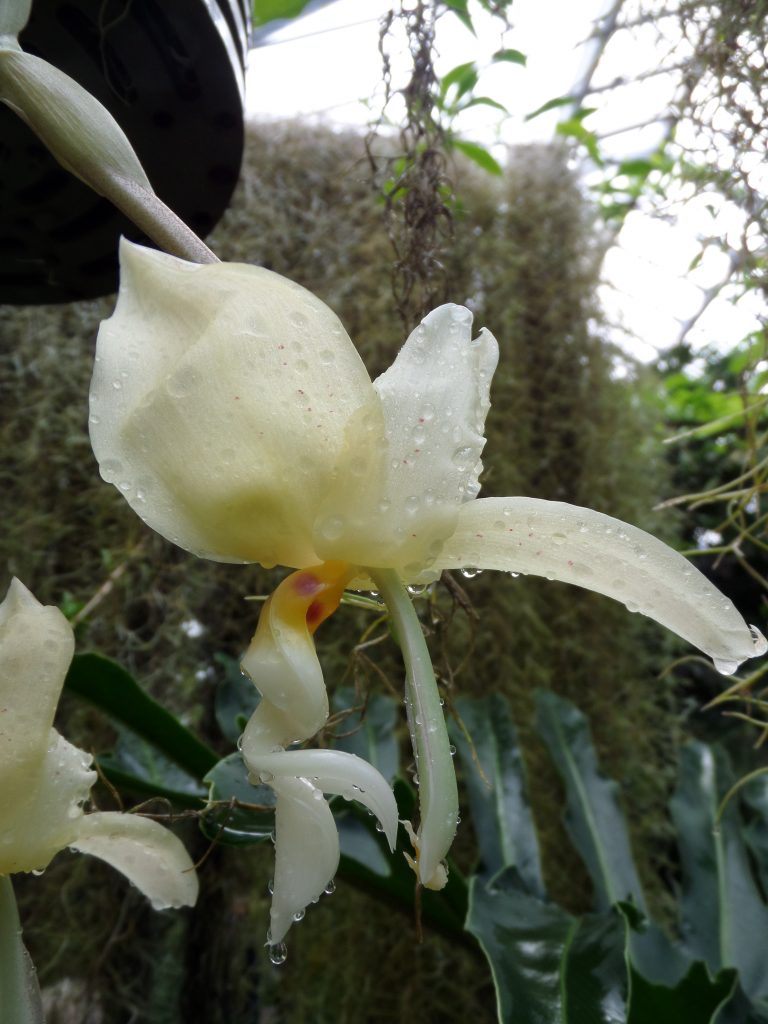 I’ve recently been working alongside Clare and Bruce, the horticulturalists who maintain the Botanics Orchid collection, to stock-take, curate and verify the collection. As part of that process I’ve been getting acquainted with genera I’d never heard of before. Hardly surprising given there are an estimated 28,000 species of orchid in over 750 genera.

One genera I had heard of, but knew little about, was Stanhopea. This charismatic and relatively small genera of orchid has about 50-60 species found in central and south America, from Mexico down to Brazil.

The generic name Stanhopea, published in 1829 commemorates Philip Henry Stanhope (1781-1855), the 4th Earl of Stanhope.  Coincidentally the word Stanhope derives from the old English for ‘dwelling on a stony ridge’.  As species of Stanhopea are described as being either epiphytic (growing on another plant for support but deriving food and water from the atmosphere) or lithophytic (same as and epiphyte but growing on or among rocks rather than plants), the generic name meaning rock dweller is as appropraite, or probably more so, than than the commemoration of a nobleman, but I digress.

The Botanics have a modest collection of 20 accession of 10 species and varieties, including one accession that dates from 1971, that steadfastly refuses to flower to let us know what it is.

We recently “discovered” that we had a two plants of Stanhopea ruckeri  masquerading under a different name in the Living Collection. The discovery was the result of pictures posted on Twitter being spotted by a Stanhopea enthusiast from Mexico.

I found it a little hard to believe that we didn’t have a record of Stanhopea ruckeri on our electronic database, so a lunchtime trip to the Library bookstack where our old card record of garden plants is kept yielded a record of S. ruckeri. This in turn gave an old garden donation number that meant I could then look it up in the Donation books, held upstairs in the Library. 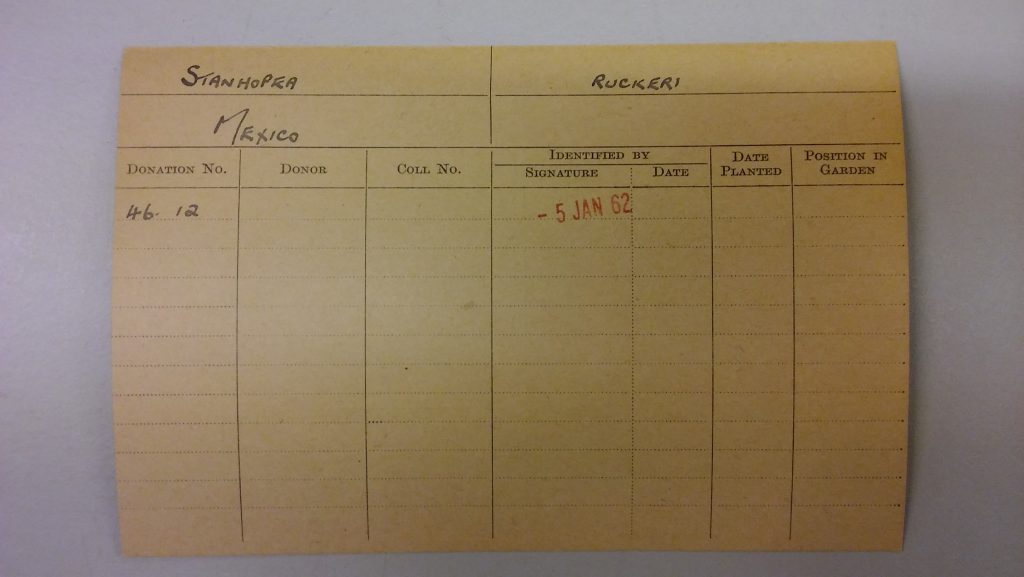 We have a number of different donation books covering the different departments, but there in the Glass Department Donation book dated 28th of February 1912 – Sanders and Son of St Albans (a well known orchid specialist nursery) was Stanhopea Ruckeri. The capital R in the epithet was allowed in those days under nomenclature rules if it was based on someone’s name. 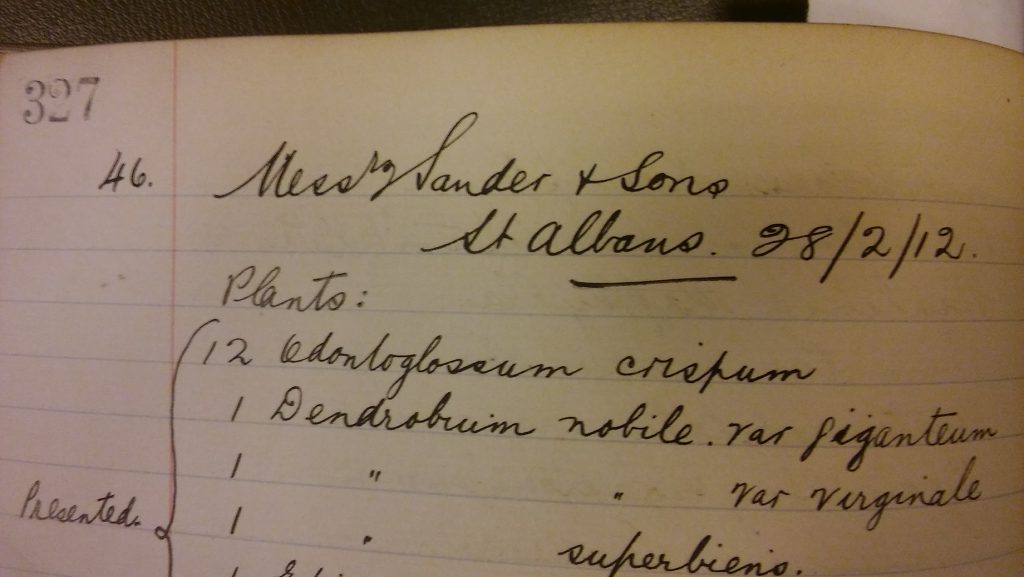 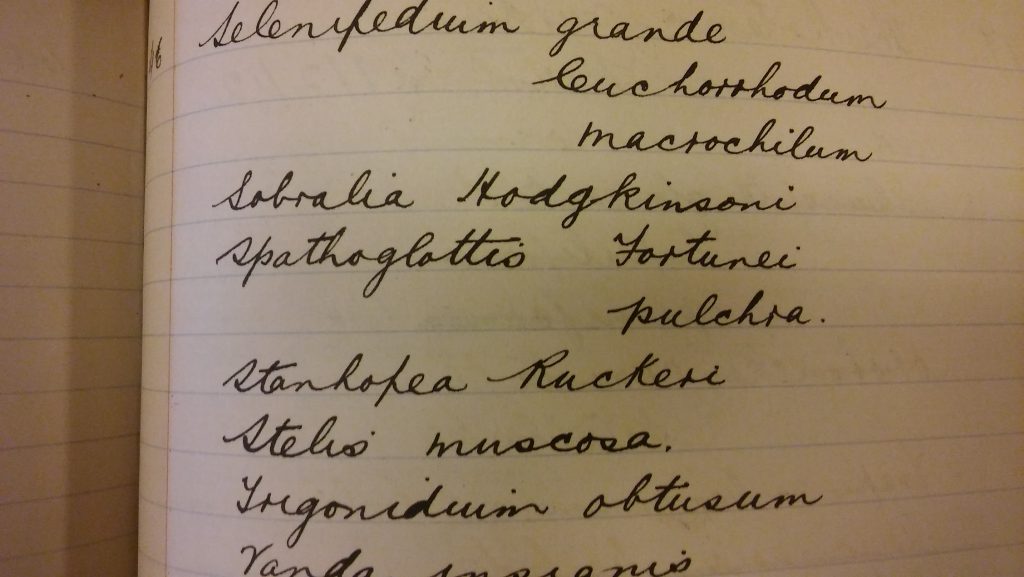 So at the end of the process not only have we resurrected a species in our collection, but we’ve also managed to fill in some of this plant’s own history so it can take its place within our shared history at Botanics.