A consequence of a wet spell and the holiday season has resulted in the lawns not being cut as frequently as usual. Two plants have taken advantage of this situation; a Rubus species has sent out its extensive root system and resultant sucker growth has appeared in the lawn adjacent to the border where the vigorous clump is growing.

In the area next to the Botanic Cottage a crop of potatoes were grown last season. When harvesting it is important to work through the crop removing all of the tubers from the soil, whatever their size.  Any remaining, known as volunteer potatoes, will then sprout and grow the following season and can be vectors of pests and disease. 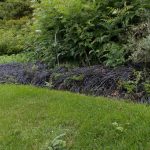 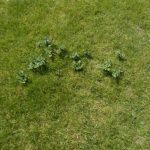