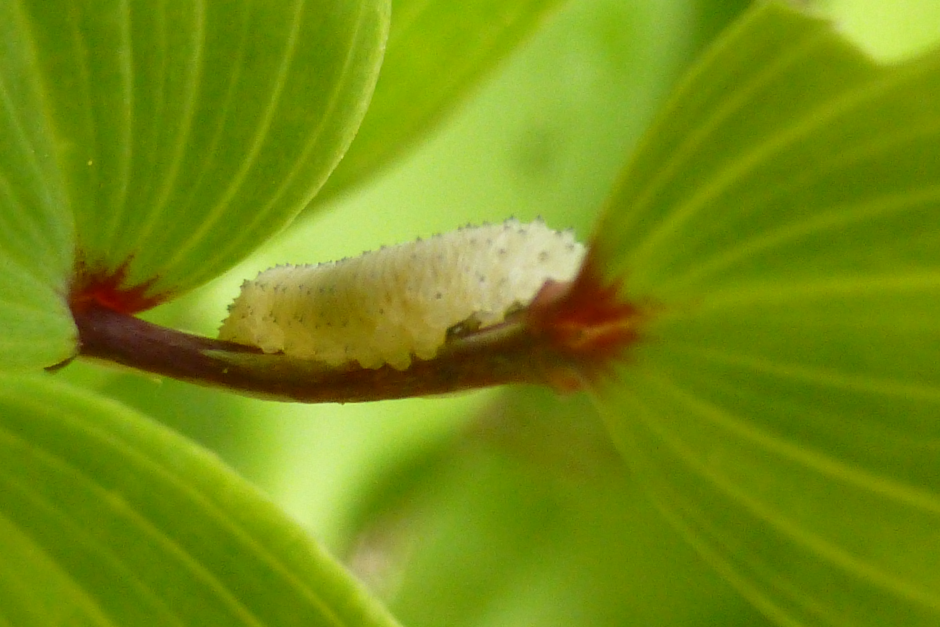 In contrast to the very dry spring (March to May), June 2017 was officially the wettest-ever June recorded at the Botanics, with over 180 mm (7.11 inches) of rain falling during the month. Nevertheless, it was also a warm month with above-average temperatures. Five species were added to the full Garden wildlife list, bringing the total from 888 on 31 May to 893 on 30 June. They comprised a leaf-mining moth, a sawfly, an aphid and two beetles.

Mammals and amphibians: Apart from the ever-present Grey Squirrels, a Fox was seen on 16th, Badger on 1st, House Mouse on 15th, a newt species (Palmate?) on 19th and Common Frogs on several dates. 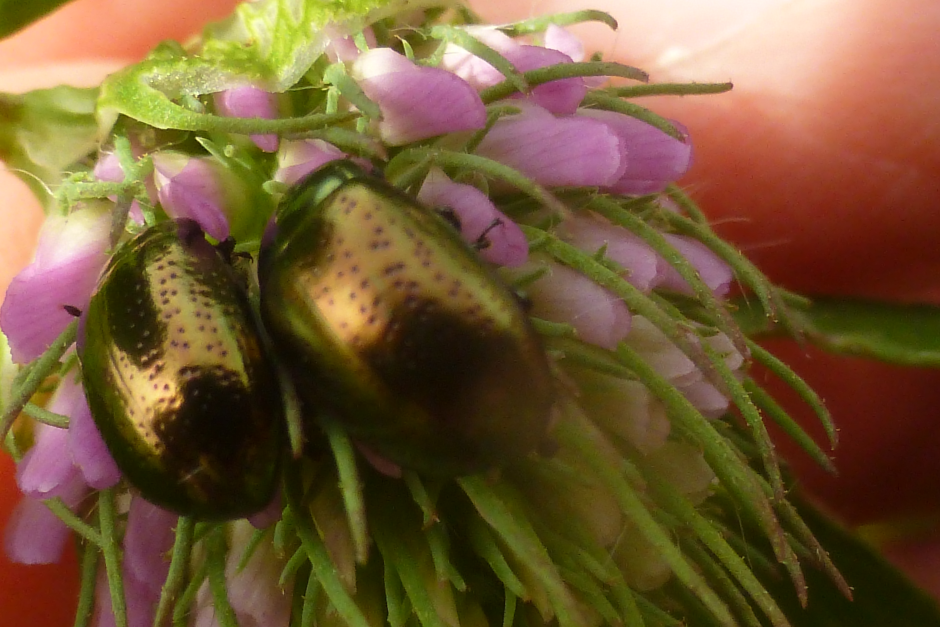 Insects and other invertebrates: Five records of three butterfly species were recorded during June:  Small White on 1st, 5th and 20th, Small Tortoiseshell on 19th and Red Admiral on 26th. The first half of 2017 has been very poor for butterflies in RBGE, with only 17 sightings of 6 species.  The corresponding periods in 2016 and 2015 were similarly poor – compare 36 sightings of nine different species in 2014, the most recent ‘good year’. Moth records included Hummingbird Hawkmoth on 7th, Light Emerald and Chamomile Shark (both on 26th), and the leaf-miner, Phyllonorycter sorbi, on 22nd, which was one of June’s new Garden records. The year’s first Wool Carder Bee was seen on 1st, the earliest this species has been seen in RBGE since first being recorded here in 2011; however, probably due to the very wet weather, which it dislikes, it was seen on only five dates with usually only a single bee evident on each occasion. The Tree Bumblebee nest mentioned in the May report was destroyed during early June because of its proximity to some staff workplaces; this resulted in a very marked drop in numbers of this species seen, although records were made till the month’s end.  Honey Bees, and several common bumblebee species were also recorded throughout the month. Solitary bees were not recorded during the month, but Marsham’s Nomad Bee was seen on 20th. Common Wasps were recorded only twice (5th and 11th). Larvae of Solomon’s Seal Sawfly were observed on shoots of an exotic Polygonatum species on 21st, a new Garden record; other sawfly records included Tenthredo cf. arcuata on 20th and Bugle Sawfly on four dates. Only five hoverfly species were reported: these included the year’s first Great Pied Hoverfly (Volucella pellucens) on 28th as well as Marmalade, Banded and Striped Hoverflies. Four other Diptera (true flies), other than gall-formers, were recorded and identified during June. Bugs included Forest Shield-bug (three dates), Gorse Shield-bug (1st and 28th), Common Flower Bug (22nd), Alder Spittlebug (20th), Common Sycamore Aphid on 20th and 28th, Silver Birch Aphid (22nd) and Lime Aphid on 21st; the last-named was a new Garden record. ‘Cuckoo spit’ of Common Froghoppers was widespread and common in wilder parts of the Garden throughout the month. Striped Ladybird (18th) and the St John’s-Wort beetle, Chrysolina hyperici (20th onwards) were both new beetles for the Garden’s list, while two further records of Rosemary Beetle were made on 13th and 20th. Other beetles included 7-spot Ladybird (18th, 21st, 28th), Red Lily Beetle (5th), Brachypterus glaber on nettles (22nd) and the weevil Phyllobius maculicornis on the hornbeam hedge surrounding the Queen Mother’s Garden maze (21st). The barkfly Ectopsocus briggsi was seen on 29th, the month’s only barkfly record. Cucumber Spider was recorded on 21st, and five different gall-mite species were identified from their galls. Finally, the mines of leaf-mining flies began to be widespread in June, with 14 different species being recorded, eleven of them for the first time in 2017. 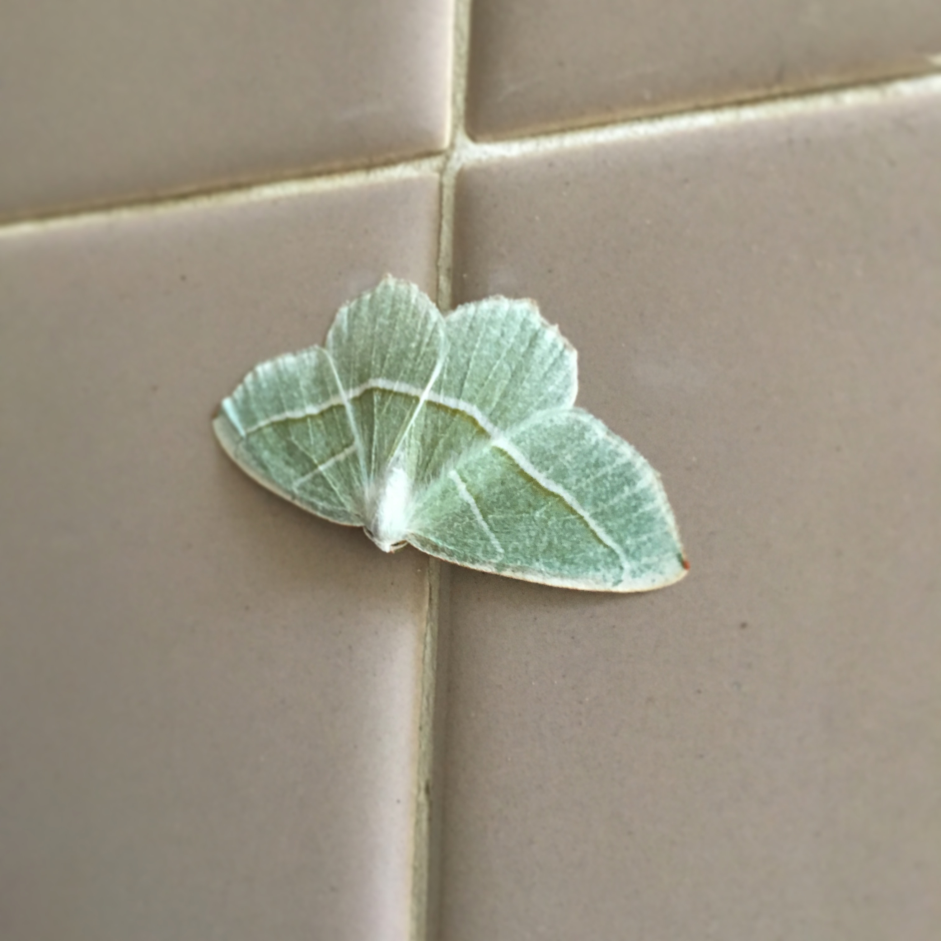