In the lead-up (or is it a wind-down?) to retirement I must clear my office, including four herbarium cabinets full of specimens laid aside from time to time pending further research. One such is a group of 52 Indian sheets mainly collected at Fort St George, the present day Chennai in South India, between 1700 and 1712, which are among the oldest specimens in the RBGE herbarium. They came to us from the University of Oxford in the late 19th century, the result of an act of vandalism, apparently perpetrated on the instructions of someone who should have known better: Professor Isaac Bayley Balfour. According to George Claridge Druce, then the honorary cuator of the Oxford herbaria, Balfour swept into (and then rapidly out of) the Oxford Botany School ‘like a tornado’. Druce was ordered to dismember one of the most important of its several sets of historic bound herbaria, the 74 volumes of Charles du Bois, containing some 13,000 sheets, so that they could be incorporated into the modern (unbound) sequence. Du Bois (c. 1656–1740) was Treasurer of the East India Company and hence almost 20% of his specimens came from India and Burma. 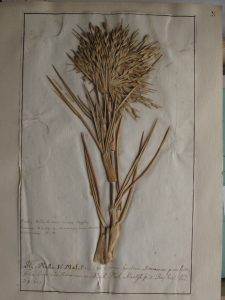 This led to a distribution of duplicates, some of which came to RBGE. These include some extremely interesting plants, including 16 sedges, ten grasses, and some economic species including two South Indian dye plants (Oldenlandia umbellata and Morinda tinctoria), a rattan (Calamus rotang) and two species of pepper (Piper longum and P. nigrum). The sheets are beautifully mounted, as can be seen from that of the sand-binding grass Spinifex littoreus.

They bear copious annotations, with references to literature then literally hot-off-the-press, including Rheede’s Hortus Malabaricus and the works of Petiver, Plukenet and Ray, showing the efforts du Bois made to identify his specimens according to the (pre-Linnaean) naming systems then available. On the Spinifex sheet is a quote from Rheede, which translates as ‘the root, crushed with the ashes of human hair and boiled, is taken with success by maniacs’!

The collector of this, and 26 of the other Edinburgh sheets, was Dr Edward Bulkley, a surgeon at Fort St George. Bulkley (c. 1644–1714) sent many interesting specimens to Metropolitan botanists and societies. It was he who sent Sir Hans Sloane that extraordinary curiosity, the ‘Vegetable Lamb of Tartary’, which Sloane showed to be the rhizome of a fern (now called Cibotium barometz). Bulkley’s tomb survives in Chennai, though hard to visit as it is now in an Indian Army compound. When I was there recently, graciously hosted by S. Subbarayalu, a retired forest officer and fellow biographer of Hugh Cleghorn, his driver was able to talk me into the compound and I was thrilled to find a well preserved (charnockite being a very hard rock!) inscription, adorned with the handsome Bulkley coat of arms, a trio of bull’s heads. Professor Peter Davidson kindly translated the Latin for me, which ends: ‘do not wonder, o traveller, that it was in the garden where he refined his soul, that he wished his body to repose, in the blessed hope of resurrection’. 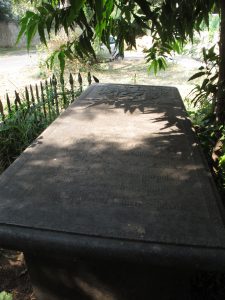 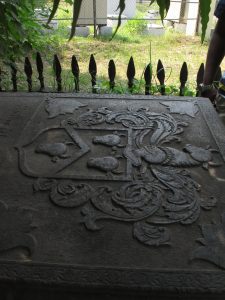