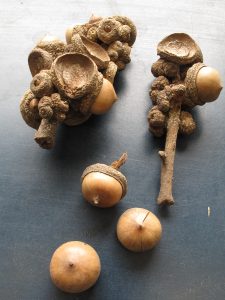 The genus Lithocarpus is closely related to the oaks (Quercus) and occurs in South and South-East Asia, with a single species in North America. Lithocarpus elegans is widely distributed, occurring from Nepal to southern China and Malaysia. It is characteristic of the evergreen forest zone that occurs between altitudes of 1800 and 2600 metres in the East Himalaya. This specimen was grown from seed collected in Sikkim in 1924 by George Herbert Cave. At this time Cave was director of the Lloyd Botanic Garden in Darjeeling, from where he made many excursions to Sikkim, collecting numerous interesting plants many of which are preserved in the herbarium of the Royal Botanic Garden Edinburgh.