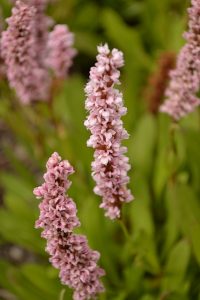 High in the Himalaya, above the tree line and above the dwarf rhododendron shrubland, the woody vegetation gives way to close cropped yak pastures and bare rocks. Large patches of pink Bistorta affinis are a common sight growing in the clumps between boulders and sometimes completely covering the smaller rocks. It’s also frequently seen in British gardens where it flowers profusely throughout the summer, and is easily propagated by dividing the creeping underground stems. This cultivar is named ‘Donald Lowndes’, which is named after a British colonel who served in the Garwhal Rifles and who collected plants wherever he was posted, in the Himalaya and other parts of India. In 1950 he joined Harold Tilman’s mountaineering expedition to Nepal, one of the first foreign expeditions to visit that secretive Himalayan country. He served as the expedition botanist, and discovered many new plants, including this spectacular bistort.

Like many high altitude plants, this species is widely used by the local people for food, medicine and in traditional celebrations. The Tamang people in Rasuwa use a paste made from the roots and the leaves to treat dysentery, and it is also said to be good for coughs, tonsillitis and fevers. Further west, in Dolpa the roots are eaten raw as food and the flowers are offered in monasteries during religious festivals.