A natural hybrid with toxic nectar 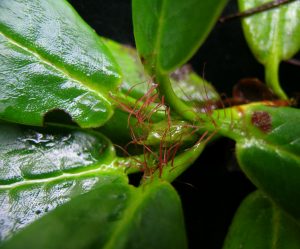 Rhododendron barbatum is one of 30 species of Rhododendron which are native to Nepal. This species commonly grows as a small tree in the understory of the high altitude fir forests and so is hardy in Scotland. It’s one of the easiest Rhododendrons to spot with its deep red flowers and stiff hairs on the stalks of the leaves. However, one of the problems of working with Rhododendron taxonomy is that the species often hybridize in the wild and display intermediate characteristics between the two parents. This plant from Nepal is thought to be a hybrid between Rhododendron barbatum and Rhododendron campanulatum, and the stiff hairs are not so prominent as in pure barbatum. Look at the Bhutanese species planted to the left. This has more typical long hairs on its leaf stalks.

Although this is a very beautiful species, the leaves, flowers, and nectar of Rhododendron barbatum (like many other Rhododendrons) are poisonous as they contain toxic compounds called grayanotoxins. This can be useful, as villagers in Nepal use the leaves of R. barbatum as a fish-poison, but these toxins can cause problems for honey producers, because if bees have fed on Rhododendron nectar, then their honey can cause “mad honey disease”, and if you eat it it can cause symptoms of extreme drunkenness such as blurred vision, loss of coordination, nausea, low blood pressure and you can even fall unconscious..

Note: The plant with accession number 19760142F is growing beside a Chinese collection 19644107A which is typical of R. barbatum and has a the distinctive long hairs on its petioles.