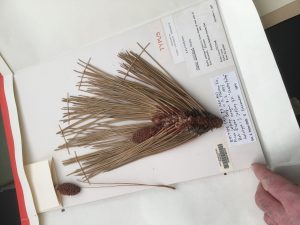 The type specimen of Jeffrey pine (Pinus jeffreyi) from the RBGE herbarium.

160 years after the disappearance of young Scottish plant-hunter John Jeffrey, a reimagining of his missing journals finally reveals the truth behind an extraordinary adventure.

In 1850, with the support of RBGE, young Scottish tree-hunter John Jeffrey was despatched to seek highly-prized exotic tree species in North America. An early letter home tells of a 1,200 mile transcontinental journey on foot. Later, tantalising botanical samples arrive from British Columbia, Oregon and California, yet early promise soon withers. Three years after setting out John Jeffrey disappeared without a trace. Those at home wondered whether he was he lost to love, violence or the Gold Rush. The secrets of the extraordinary adventure lie in his precious journals which have never been found. However, award-winning author, contemporary tree-hunter and forest scientist Gabriel Hemery has filled this gap with a work of biographical fiction, Green Gold, that tells Jeffrey’s exciting story in diary form.

“I have determined that I will start back north tomorrow, and find company as soon as possible in case my wounds fester, although I now feel a little more myself. The snow-clad peak of Mount Shasta exerts a dominant presence in this place, its foothills providing fertile hunting grounds for the botanist. Before me tall pines, all of the same new species, grow between massive boulders extending without interruption down the valley and far into the distance. This land is a paradise so rich it would see the same gentlemen emptying their purses to secure more collectors. Yet their ambitions might be cruelly shattered by my appearance.”

John Jeffrey had a tough assignment, not only following in the footsteps of David Douglas, but also finding that his expedition coincided with the Gold Rush. At the time his work ethic was questioned and his disappearance remained a mystery. Thanks to his work however the seeds from 119 species were collected and more than 400 plant specimens sent to the Herbarium at RBGE, including seeds and/or specimens of 35 conifer species. Two plant species still bear his name, Dodecatheon jeffreyi and Pinus jeffreyi while a third, Penstemon jeffreyanus, was later renamed by botanists.

Author Gabriel Hemery relied heavily on the archives of RBGE for much of his research. There are plans for an exhibition that will open at RBGE to coincide with the book’s publication in early 2018. The book is to be published thanks to a modern twist on an old publishing model which requires sponsorship from individuals.

Find out more at www.gabrielhemery.com/books