What’s After After the Storm 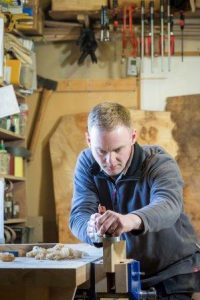 A hundred years ago, in the Spring of 1917, Europe was in the in the midst of the Great War and here in Edinburgh doctors at Craiglockhart Hospital were carrying out pioneering work to rehabilitate military personnel suffering from the condition then known as ‘shell shock’ that we now recognise as post-traumatic stress disorder (PTSD). Treatment was led by Dr William Rivers a proponent of the ‘talking cure’ which has evolved into cognitive behavioural therapy (CBT) and become a widespread and common alternative to prescription drugs for healing trauma victims. Rivers’ best known patients were the ‘War Poets’ Wilfred Owen and Siegfried Sassoon and it was thanks to the Craiglockhart Hospital’s belief that shell-shock suffers should be kept active, both physically and mentally, that we have such an outstanding collection of poems, many of them appearing first in the hospital’s in-house magazine The Hydra.

Clinical psychiatrists continue to debate the best ways of treating PTSD sufferers but keeping active in mind and body are generally recognised as important in helping to maintain well-being and to aid in recovery after trauma. One of the furniture makers in the After the Storm project, Stephen Finch has described how getting back into making through designing and constructing his Asymmetric Writing Desk helped him regain his passion for woodworking after the death of both his parents. Author Robert Penn, in an essay in the After the Storm publication, shares how walking in the woods or ‘forest bathing’ as the Japanese call it, has repeatedly eased him out of debilitating periods of depression.

Many people have asked about the legacy of the After the Storm Project and where we take the ideas that have been generated next. One of our aims is to look at the contribution that botanic gardens, like ours, make in helping people recover from mental health issues and the role they play in maintaining well-being in society. The is much anecdotal material that suggests that many people ‘feel better’ after a walk in the Botanic Garden but very little actual evidence-based research on the therapeutic value of botanic gardens compared with other green spaces. There is much variation between botanic gardens but they have certain characteristics in common; for example they are diverse (species and landscapes), inherently interesting and secure. Does this make them ‘super-green spaces’ with greater potential for promoting health and well-being than the average municipal park?

Over the next few months the RBGE public education team and our colleagues at BGCI will continue to consult widely on how we might create a legacy from After the Storm that investigates some of these ideas with the aim of making the Botanic Garden an even better place for helping people recover from personal storms in their lives.

The After the Storm exhibition ends on Sunday 28 May. The publication is available from the Botanics Shop or online https://rbge-publications.myshopify.com price £10. Ideas for developing a legacy for the After the Storm Project should be sent to me at i.edwards@rbge.org.uk